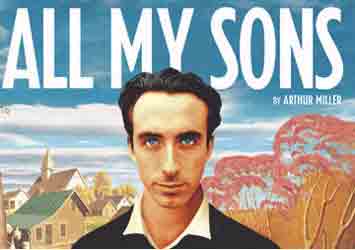 Arthur Miller&#146;s 1947 drama gets its first staging at the Irish National Theatre in a post 9/11, post Enron world which throws new complexions upon its study of the ethics and morals of the American military-industrial complex. Set in a cozy but not entirely comfortable post World War II America, the story revolves around the consequences of questionable choices. Joe Keller (Peter Michael Goetz) is a successful small town industrialist, a manufacturer of consumer hardware components who made parts for fighter planes during the war. His son Chris (Declan Conlon) looks set to take over the family business, although there is some reluctance on his part to fully follow in his father&#146;s footsteps. Chris is really more concerned with finally asking pretty Annie Deever (Justine Mitchell) to marry him, a situation complicated by the fact that she is the wife of his brother Larry who has been missing in action since 1944. Mother Kate (Helen Carey) still holds out hope that Larry is still alive, but as the play opens on a dark and stormy night, the young tree which the Keller family has planted in his honor has fallen over and broken.

A further barrier to the harmonious union of Chris and Annie is that she is the daughter of Joe&#146;s former business partner, now serving time in prison for negligence after their company supplied the air force with faulty components, causing the deaths of 21 pilots. Though Joe was exonerated on appeal, guilt and irresolution hang over the family. Trying to break the news of Chris and Annie&#146;s engagement to Kate will be a tricky business, and with Kate&#146;s brother George (Darragh Kelly) visiting their father in prison for the first time, new doubts are raised about the sequence of events which led to his conviction.

All My Sons is a powerful and moving exploration of the paradoxes and illusions upon which the American dream is built. Says Miller: "People elsewhere tend to accept, to a far greater degree anyway, that the conditions of life are hostile to man&#146;s pretensions. The American idea is different in the sense that we think that if we could only touch it, and live by it, there&#146;s a natural order in favor of us; and that the object of a good life is to get connected with that life and abundant

order." This play is built around the inevitable disruption to the peaceful Norman Rockwell-like facade which greets the audience at the opening. Miller&#146;s vision of the fissures on its surface is not nihilistic though. As Christopher Bigby observes in the program notes, Joe Keller&#146;s appeal to "See it human," is one which reminds us that it is sometimes too easy to separate large-scale moral and ethical dilemmas from the human mistakes and misjudgments that sometimes lead to tragic, or even evil, outcomes. The real issue is the necessity for a sense of personal responsibility which grows outward from the individual to society.

Preceding Death of a Salesman by two years, All My Sons was proof that Miller could handle characterization and dramatic action following some early failures. The writing is superb on the macro level. The initial dialogue exchanges are friendly and banal, and at first the dramatic conflict seems to arise gradually and naturally out of the conversation of ordinary Americans getting on with average lives. By the time the play has ended Miller has succeeded in creating high drama without hysteria, and though there are several sudden and dramatic twists and reversals which feel a little contrived, the solid dialogue and believable characters carry it through.

The Dublin production is marvelously handled by former Abbey artistic director Joe Dowling. Designer John Lee Beatty&#146;s stunning set recreates the backyard of a comfortable small town American home to scale in forced perspective, complete with trees, a garage, an alley, and even a neighboring house, all evocatively (and suggestively) lit by Rupert Murray. By virtue of an exchange program with Actor&#146;s Equity, Peter Goetz and Helen Carey bring authentic American voices to the stage. Goetz is absolutely spellbinding in his characterization of the flawed patriarch, able to evoke affection and contempt in the audience and with a voice so deeply resonant that the very stage seems to respond to his presence. Carey is equally authoritative, and though her character operates at a quieter register, her importance and impact upon events is never in doubt.

Of the Irish cast, Justine Mitchell (Pride and Prejudice, Blithe Spirit) brings out the depths in Miller&#146;s grasp of the ever-widening net of consequence in this emotional drama. Unfortunately Declan Conlon (Henry IV, A Whistle in the Dark) is a major liability in the pivotal role of Chris. Exuding none of the conviction and charisma which the character supposedly possesses, mouthing most of his dialogue from the back of his throat in a fairly unintelligible mumble, the actor effectively torpedoes the production. The lack of clarity in delivery is ultimately fatal, softening many of the dramatic confrontations in the second act and leaving the audience not only less interested in the fate of this family, but particularly unconvinced that they can find in Chris a model for the future of an honorable and moral America.