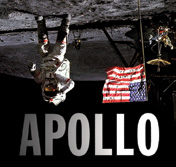 Apollo is one of the rare instances where the whole equals more than the sum of its parts. There is dance, but it is not a dance, and there is no choreographic attribution. There is music, original (Randy Tico) and wonderfully supportive, plus timely appropriated material, but it is not a musical. There is history &#150; a lot of history, but it is not a docudrama. Is it informative? Yes. Thought provoking? Most certainly. But first and foremost, it is entertaining. This is not a science lesson, but an exploration of the men who made science.

Apollo is the American manned-space flight to the moon which captured the world&#146;s imagination in 1969. "Lebensraum" is German for living space, a Hitlerian concept meaning &#147;expansion of territory.&#148; Though touted as an American accomplishment, the American space program rested squarely on the shoulders of Nazi-era German scientists such as Werner von Braun and Arthur Rudolph.It is this genesis which is explored by playwright Nancy Keystone and her Critical Mass Performance Group. Opening in 1919, the story is told mostly in ensemble form, with the part of Werner von Braun played by several actors, and all actors playing more than one part. Pieces of history are filled in with the sparing use of video.Dialogue comes in snatches and often more than one character speaks at a time. Yet the story and messages are clear.

There is the unselfconscious exuberance of young German scientists dreaming of the possibilities of rocketry unimaginable to the ordinary person of their time, the fantasy aspects underscored by the reading of Jules Verne.They look like nerds in their white socks and move like puppies effectively simulating weightlessness in duet with their chairs and prancing around in mock German military movement.There is the inconvenience of politics that is not allowed to get in the way of their fanatical pursuit and the single mindedness of Von Braun (Hugo Armstrong, Kelly Boulware, and Russell Edge) which is well served by his charisma.

What mattered to these men was the pursuit of their goal.And what mattered to von Braun was the dream of men in space. Hitler? Well, he can serve to support the project; join the Nazi party.He wants advanced weaponry? Great, sell him on the idea of rockets leading to the development of the ineffective V2.Never mind the ghost of the Dora concentration camp workers (Richard Anthony Gallegos) who toiled and died to build them.Need to join the SS? No problem for von Braun and hey, doesn&#146;t he look like a blond god in that uniform? Oops, Germany is losing? Get discovered by the Americans while hiding luxuriously in Bavaria and capture their imagination with the possibilities the new scientific developments could bring to the glory of America.These are the golden boys, or more appropriately, the Teflon boys.Unburdened by their history or any personal qualms, they brush aside any criticism with the excuse of just following orders. The underlying question: if science is amoral, can it be served by scientists who are amoral themselves?

Act I traces the story through the first moon landing with humor, wit, and athletic energy.It could stand on its own. Maybe they really were just in pursuit of discovery.Though still entertaining, Act II takes a more serious turn when a young lawyer, Eli Rosenbaum (David Heckel), son of a Jew who had escaped from Dresden and became one of the U.S. Army liberators of the Dora concentration camp, becomes obsessed by the history of Arthur Rudolph and joins the Justice Department in an effort to root out Nazis who have profitablysettled in the U.S.This is a more serious, though still stylized, portrayal of events, weaving together America&#146;s obsession with the cold war and competition with the Soviets, and the rampant paranoid anti-communism, justifying the use of the former Nazi scientists.Despite the sharp shift in mood, the juxtaposition of the two acts makes for a thorough theater-going experience that is neither fluff nor bitter medicine. (Apollo &#150; Part II is still a work in progress.)

Some of the imagery is sophomoric (especially having a cheesy god, Apollo, tacked on at the beginning and the end). The dancing is well performed and charming, but not taxing (these are actors, not dancers). Randy Tico&#146;s music is mood setting, not cutting edge.At 2 1/2 hours the show could be cut down a bit, but taken all together Apollo is an original and fulfilling evening of theater.