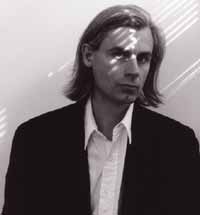 Martin Crimp’s Attempts on Her Life is a courageous and fascinating experiment in the creation of a new kind of play. There is no plot in the traditional sense, there is no central character who actually appears on stage, and there is no supporting character who is likable or who invites anything but fleeting audience identification. Although it seems clear that the playwright did not leave these things out by accident, it is difficult to become involved with the play except on one level, that of admiring it as an experiment.

There is (or rather isn’t, because she never appears) a character known as Ann or Annie. Depending on which set of supporting characters is on stage at the moment, she is a character in a film script, or a peripatetic young (or perhaps middle-aged) woman who travels about the world carrying a red tote bag. In the red tote bag are some bombs, because she is reputed to be a terrorist; or perhaps there are just stones in the tote bag, because she may be contemplating suicide by drowning. Or is she a machine? To some observers she seems to be a machine, or is it an illustration made up of tiny dots? Is she a mother who has murdered her child and put the remains in two plastic bags? Is she a paranoid survivalist nut with a pickup truck and a few guns?

Or is Ann a new model of Italian car? In one scene a young actor listens on headphones to ad copy for the car in Italian and translates it into English. The Italian version, in voice-over, is read by a Mussolini sound-alike who is, as he reads his version of the copy, going stark raving mad.

One scene after another seeks to illuminate who Ann really is, and nobody, in their strongly held but wildly varying opinions, seems to have any doubt about it. It is only the audience that is utterly confused. This is, apparently, as the playwright intends, and it is a fascinating choice. Perhaps, with echoes of Rashomon, the viewer is meant to be frustrated, because who can really say who anybody really is, what the truth of any complex situation really is? The viewer struggles to gain a toehold on the slippery surface of the play, and perhaps the point is that in knowing other human beings there are only a few precarious and ultimately treacherous such toeholds available.

This is surely a point worth making, but as drama, or as dark comedy, it is extremely difficult to do without more of the ingredients of character and plot. In Attempts on Her Life, individual scenes and certain supporting characters do momentarily become engaging, but some necessary core seems to be lacking. In spite of the play’s passions, watching it is a very cold experience.

The acting is excellent, with each actor playing numerous roles. T. Ryder Smith, who recently succeeded brilliantly in the one-character Underneath the Lintel, creates several detailed and quite different characters. Christopher McCann and Jane Houdyshell both were spectacular in this season’s Zipper Theatre production of Charles Mee’s True Love, and here reinforce their reputations as two of New York’s best character actors with focused, finely honed performances.

Since the play is so episodic, director Steve Cosson has had to choreograph the rapid-fire movement from one scene to another, and he’s done so splendidly. He has also supported the actors in creating the feeling that, even if the audience isn’t sure what’s going on, the actors do. The set, by Robert Pyzocha, especially given the challenge that the theatre affords virtually no wing space, creates a fluid kaleidoscope of time and place.

Martin Crimp, with his unusual ideas of theatricality, character, and identity, is certainly a playwright to be eagerly watched. Attempts on Her Life is, like life itself, extremely hard to completely understand; therein lies not only its weakness, but also its strength.