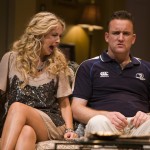 Ross O’Carroll-Kelly: Between Foxrock and a Hard Place

The Ireland of 1998 was a radically different place than it is now. The country had progressed almost immeasurably from the parochial live-action folk park that nonetheless continued to loom large in the imagination of visitors from abroad. Following the crippling recession of the 1980s, a period of unprecedented economic growth fueled by low corporate taxes and a growing sense of cultural and social empowerment in the face of the collapse of the power and influence of the Catholic Church and the growth of multicultural migration had been christened the “Celtic Tiger” (after the “Tiger” economies of the Far East in the preceding years).

On the socio-psychological front, a generation of Irish children were growing up facing a world that seemed to offer considerably less challenge than that which had greeted the previous ones. Instead of looking salvation or opportunity through emigration, Irish teenagers, particularly the children of the nouveau riche, could look forward to a life of comparative ease and comfort. They also began to develop a sense of entitlement to exactly this lifestyle.

Ross O’Carroll-Kelly was exactly one such child. The creation of journalist Paul Howard, Ross’ adventures as a freewheeling, not-too-bright-but-incredibly-handsome “lad about town” and aspiring Rugby star were chronicled first as a series of satirical newspaper columns that began in 1998, then as a string of successful novels, beginning with “The Miseducation of Ross O’Carroll-Kelly.” The most recent, “The Oh My God Delusion,” has just been published (2010), coinciding with the production of the second of two plays featuring Howard’s monstrosity from the id of Millennial Ireland. The previous, “The Last Days of the Celtic Tiger,” was first performed in 2007. It charted, as had the novels, the decline from the heady days of the early new millennium towards the “credit crunch,” as young Ross found ways to consistently avoid the harshest ravages of encroaching economic deprivation in the face of a world that was clearly otherwise falling apart. Ross’ single-minded devotion to bold-faced denial retained the satirical charm of his privileged idiocy in his earlier adventures, and some of the later novels, particularly “This Champagne Mojito Is The Last Thing I Own,” packed considerable and genuine impact as chronicles of the Collapse.

“The Last Days of the Celtic Tiger,” like “Between Foxrock and a Hard Place,” began with a “strictly limited engagement” that ran for a long long time, and there is a not unreasonable expectation that its successor will do likewise. Patrons entering the Olympia are greeted with an unfamiliar sight in Irish theatre: a merchandising stand with Ross badges, T-shirts, and other unnecessary paraphernalia that are a sure sign not so much of a theatrical experience as a franchise in full flow. No recession around here, as they say in Dublin these days. So be it.

As a play, “Between Foxrock and a Hard Place” isn’t terribly good. Substantively, it is a retread of “The Desperate Hours,” Joseph Hayes’ venerable hostage drama pitting a gang of hardened criminals against the suburban elite. Here “desperate” criminal Martin Doran (Gary Cooke) comes to call at the O’Carroll-Kelly home one evening (it should be noted that in Hiberno-English and Dublin parlance, the word “desperate” also connotes “awful”). The family is in the midst of a gathering to discuss the implications of the rezoning of their exclusive address, specifically how it will devalue their house to a mere three million euros. Doran’s arrival (an intended “Tiger” kidnapping) forces them to confront their more personal demons — their fractious and generally rather hateful relationships with one another.

In truth though, all of the above is pretty much a premise for gathering a cast of by-now well-familiar characters and watching a troupe of skilled actors impersonate them. The familial dramas have been played out in detail over the preceding 12 years, and part of the pleasure of the show is simply “seeing” them. As theater, though, it must be acknowledged that the play amounts to a kind of comedy revue, a collection of gags and one-liners interspersed with painfully forced exchanges and speeches addressing the theme of the “haves” and “have-nots” of contemporary Ireland and assessing how we got into this mess and might get out of it. Not an unworthy goal, but if we’re talking about theatrical art, the form of presentation is undistinguished. Ah, but did you buy the merchandise? Why, of course? Did you laugh? Most definitely. Was the audience in fits and stitches from start to finish, applauding on cue, smiling as they left, and on their feet to salute the performers at the end? No question.

“Between Foxrock and a Hard Place” is a well-presented entertainment, of that there can be no doubt. Audiences who have enjoyed the novels will enjoy the show, and rightly so given the effort that has been put into “getting it right.” Joe Vanek’s enormous set evoking the palatial environs of the O’Carroll-Kelly home provides a suitably broad stage for the constant presence of a game ensemble. After the initial entrances, the entire cast is on stage at all times, and director Jimmy Fay does an admirable job of blocking them so that things do not become cluttered.

The cast, many of whom are reprising their roles from “The Last Days of the Celtic Tiger” know precisely how this is meant to play out, and put considerable energy into sustaining what are basically satirical caricatures with enough identifiable humanity to sustain sympathy or interest. Rory Nolan is actually underused as Ross, a character from whose point of view all of the actual novels are written. In print, his particular South Dublin vernacular works like Anthony Burgess’ slang in “A Clockwork Orange” — it immerses you in an arguably unreliable authorial voice that nonetheless gives particular flavor to every utterance. On stage and separated from this inner monologue, Ross is not really the center of his own story, and Nolan, though he has some good moments and embodies the character very well, is often reduced to standing to the side with a kind of uncomprehending sneer on his face. This is apt though.

The other performers also embody their characters well, including Philip O’Sullivan as the irrepressible Charles O’Carroll-Kelly (his name, incidentally, as with most of the principal characters, is an acrostic), white-collar criminal, entrepreneur and absolute optimist. O’Sullivan captures the subtleties of this figure very neatly, with some well-timed and well-modulated one-liners accompanied by a physical assurance that also hints at the resolution of the plot (shhhh). Susan Fitzgerald is a less brittle Fionnuala O’Carroll-Kelly than this reviewer had always pictured, but she oozes the matronly sexuality of a bejewelled social climber very appropriately, playing her “seduction” scenes with the hapless Doran (Cooke) very well. Lisa Lambe was arguably born to play Sorcha O’Carroll-Kelly, Ross’ soon-to-be-ex-wife and childhood sweetheart. Again though, the play doesn’t really give full vent to her character, and the same is true of Erika (Aoibhinn McGinnity), her long-time BFF who was recently revealed to be Ross’ secret half-sister (much to Ross’ chagrin, as he had always been attracted to her). Completing the cast is Laurence Kinlan as Ronan, Ross’ teenage son from an indiscretion in his youth with a young woman from the North side of the city (the “undesirable” end). Kinlan perhaps plays the character with a little less cheer than he might, running it a little too close to realism at times in a way that threatens to derail the broad type of comedy in play here. As an ensemble, this cast performs well.

Inevitably, audiences attending the show — who are not, as noted, going to be fans of the books — are going to find themselves evaluating what they see based on what they have read, although patrons of culturevulture.net may well have the unique privilege of coming from completely outside a very well established frame of reference, and may have quite a different mode of response. This makes the actors’ jobs incredibly difficult, and credit must be due to their endurance in that sense. Paul Howard is the puppetmaster here, in spite of the reservations he expresses in the production notes about seeing his story handed over to other people to tell. Howard also speaks in those notes of the “thrill of live comedy,” and here he has hit on the heart of what it is this show is offering. This is a comedy show something closer to stand-up with role-play than even to pantomime or farce, and as a comedy show based around some very funny works of recent Irish satire, it offers the audience some fascinating insights into the mindset of recessionary Ireland.

It is, at the end of the day, a very local affair, though, and even the endless in-jokes throughout the program about the South Dublin address where the action takes place (Foxrock) are going to seem like hieroglyphs without some kind of primer. Hopefully this review may act as a sort of Rosetta Stone if one is required. If not: if you are well acquainted with this world and have been anticipating this show since its comparatively recent announcement, then you’re in for exactly the treat you expect. Buy a badge. I did.