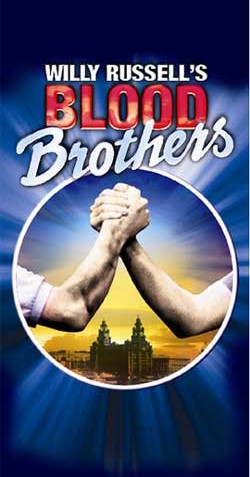 Twin brothers separated shortly after birth lie reunited in death at both the rise and fall of the curtain of Willy Russell&#146;s musical drama. Who is responsible? There are many suspects: two women who strike a deal to trade in human life; a younger woman whose love for both men will drive a wedge between them; an errant older brother whose trajectory towards crime seems inevitable; a certain weakness in will on the part of both of the boys which may be something to do with their having been robbed of their birthright of unity.

A grim narrator takes center stage at the end and asks if it is fate, superstition, or "that thing we have come to call class," which is really responsible. Given that the play was written in the economically depressed, socially divided Great Britain of 1983, the suggested answer is unsurprising. Liverpool-born playwright Russell turned his hand to the musical genre for the first time here, having already achieved success with dramas and comedies including One for the Road, Stags and Hens, and, most importantly, Educating Rita, the latter a comic drama in which the class divide which separates a student and her professor proves only an illusory determinant of the true power to change. Russell&#146;s credentials as both a keen observer and a social polemicist were thus well established and the musical seemed like a strange place to go next. The result was a significant success though, a show which continues to run in London and tours the rest of the world.

The question of blame hangs heavily over all of the dramatic action, but though there are many human factors in play, Russell&#146;s ire is firmly directed at the class system. The boys have led very different lives, one in the impoverished back street terraces of the city of Liverpool, the other across the park in the more respectable end of town. The children were disunited when their mother, Mrs. Johnstone realized that she could not afford to raise them both. She struck a reluctant bargain with her childless employer, Mrs. Lyons, that she would give her one of her then unborn twins and never reveal the truth. Ironically, as if drawn to one another by forces larger than geography or economics, the boys meet and become friends. Realizing they share a birthday, they swear to be blood brothers. Each finds the other a fractured mirror wherein all his hopes and desires are reflected. Fate, naturally, intervenes in their relationship, and a plethora of human frailties and the mixed motivations of those around them both eventually bring them into conflict.

Blood Brothers is not without its contrivances and narrative lapses. Though sometimes clever and usually fast moving, the show becomes progressively grimmer in its second act during which the political message is laid on very heavily. The play is not without heartfelt emotions or human empathy, but it frequently seems as though the necessity to make a statement has trodden on the demands of good storytelling. Though the play works as parable, the final song&#146;s mournful call for reassurance "Tell me it&#146;s not true" seems hardly necessary.

The music is of its era. It is centrally driven by electric piano and howling guitars characteristic of those &#145;80s power ballads which are, by now, either a nostalgic pleasure or a perennial pain. As such the musical style captures something of the moment of the show&#146;s creation, but arguably this has now become part of a retrospective vibe rather than something which gives the production contemporary edge. That noted, the songs are as "hummable" as the writer had hoped they would be and there are some moving solos and duets.

The current Dublin production headlines British-born but Irish resident Rebecca Storm in the role of Mrs. Johnstone, a character she has been playing since 1984. She is thoroughly engaging and tonally perfect. Her familiarity with the part shows in the ease with which she handles the physical acting along with the singing. Most of the rest of the cast are relatively new to their roles, but seem no less comfortable on stage. Sean Jones is a strong, credible Mickey and Jacqui Charlesworth is good as Mrs. Lyons. Keith Burns is occasionally drowned out by the orchestra, but looks suitably brooding as the portentous bogeyman narrator who constantly strives to remind the audience that in spite of its moments of levity and nostalgia, this is a story of tragedy, a tragedy rooted in the evils of social and economic inequality.