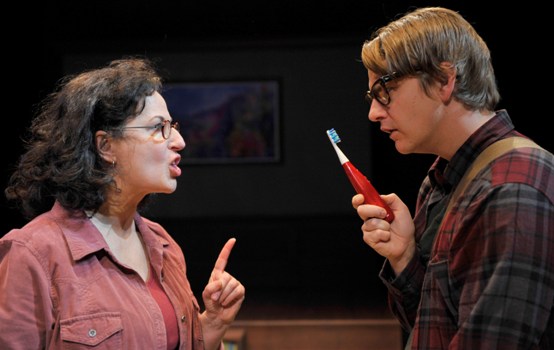 Picture this: a macho photographer who specializes in nude female studies, a lesbian couple with a dual consciousness raised pretty darn high and a son who may or may not have Asperger’s syndrome. And it’s a comedy! There is something perversely delicious about watching the audience being skewered on the verbal barbs of Annie Baker’s “Body Awareness.” Perhaps this pleasure has been available in other venues which have shown this promising young playwright’s work, but in Berkeley, the legendary bastion of political correctness, her satire on just that, among other things, is a double hoot. I guess I like to see my neighbors squirm in their seats.

It’s winter on the campus of little Shirley College in Vermont, but things are heating up fast. One of the psych professors, Phyllis (a pitch-perfect Amy Resnick), has organized “Body Awareness Week,” bringing in all manner of performers and presenters — including the aforementioned photographer. Howard Swain plays Frank, the photographer, with unbridled glee, and it’s a lot of fun to watch him shake things up in Phyllis’ unusual but essentially rather staid domestic life. Her partner, Joyce, makes organic soup and struggles to communicate with her highly dysfunctional son, Jared. Jeri Lynn Cohen is Joyce, a high school teacher who fairly quivers with vulnerability and inhibition before her more verbal and outspoken lady love.

Good as both women are (two of the Bay Area’s best actresses), it is Patrick Russell’s Jared who comes close to stealing the show. The kid is brilliant, sullen, asocial and totally screwed up, but you gotta love him. It is Jared who lends the piece a lot of its comic flair. Every time he opens his mouth he sticks both feet in. When the photographer decides to make a nude portrait of Joyce and, upon the older man’s advice, Jared attempts to meet a girl, it all hits the fan. Phyllis’ Body Awareness Week has not had much of an effect on her students, but her family seems to have taken the message more seriously than she would have wished.

Joy Carlin has expertly directed the play in a series of short scenes. Kent Dorsey’s set, which goes from the women’s bedroom to the kitchen to a college lecture hall with the sliding of a bed and the flip of a screen, is masterful. “Body Awareness” is not a great play but it is a lot of fun. And, considering the playwright’s age — a mere 28 — that great one may be lurking just around the corner.