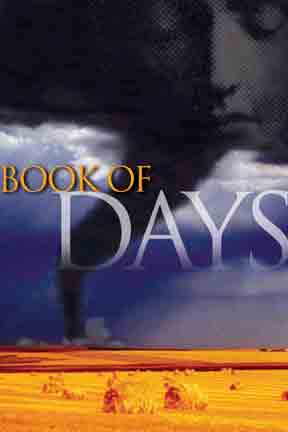 "In my end," wrote T.S. Eliot in Four Quartets, "is my beginning." Lanford Wilson’s latest play, Book of Days, receiving its New York premiere as part of the Signature Theatre’s season devoted to his plays, confirms this aphorism by returning to subject matter and theme articulated in the playwright’s earliest work. Wilson established his dramatic bona fides in the mid-1960s with two powerful full-length plays presented successively at Cafe La Mama:Balm in Gilead and Rimers of Eldritch.

The former play was a pitiless contemporary portrait of the socially deviant denizens of an all night seedy coffee shop on upper Broadway–petty thieves, pimps, male and female hustlers, junkies, transvestites, "the scum, the lost, …the dispossessed." An unremittingly bleak canvas, where there is no balm or succor. And yet, however inadequate, there is a struggle against the isolation of individualism, a reach towards a sense of community.

But if authentic community is hard to find in the mean streets of a centrifugal culture, it is even less evident in the stagnant small-town society so many of his characters–including Wilson himself–have fled. The Rimers of Eldritch shows why the drifters and grifters left their repressive hometowns in the first place. Looking back in anger and sadness, Wilson bitterly excoriates the warped morality of a culture which pays lip service to Christian community but will tolerate no deviance from a dehumanizing morality. The play is set in a dying midwestern town whose dwindling inhabitants are encrusted by values that imprison them like rime, a heavy frost that petrifies. In destroying the town eccentric, the rimers of Eldritch are plagued by a spiritual sterility all the more vicious because of its hypocrisy. To be really saved one must flee at all costs. Throughout his long and productive career, Wilson has periodically returned to his twisted roots to reconfirm the wisdom of his spiritual expatriation.

Book of Days is very much a variant on The Rimers of Eldritch, another riff on the theme "Goodbye to All That." It is set in the fictional small town of Dublin, Missouri, population about five thousand, in the southwestern part of the state. It is a town of Norman Rockwell typicalness, "a clean /quiet /wide awake/prosperous town." This information is provided at the outset by the cast functioning as a kind of collective Our Town Stage Manager. Wilson here employs a technique he often favors: to gently fracture the surface of realism while essentially remaining true to its conventions. In Book of Days the audience is greeted visually by a series of wooden bleachers which suggest a school gymnasium minus basketball hoops. Enter the actors who address us directly about the town the play is set in. At various times during the play one or other of the actors, in or out of character, functions as a member of a chorus elucidating an element of the plot or character. Essentially, however, the play unfolds in a series of vignettes realistic in character portrayal and plot circumstance which take place in various town settings imaginatively suggested by the unit set.

The tale told is not a pretty one, ending as it does in double murder. Briefly, in characteristic Wilsonian style, the play paints a broad collective portrait of Dublin residents concentrating on two families, the Hochs and the Bates. Len Hoch is the manager of the town’s biggest commercial venture, a cheese plant. His wife, Ruth, is the company bookkeeper, who has just been cast as the lead in a local regional theatre production of Shaw’s Saint Joan . The cheese plant is owned by Walt Bates, a crusty but venturesome codger, an entrepreneur of the old school. Len has convinced his boss to defray some current profit in order to produce some really gourmet cheeses, which need time to age, and which, he insists, in the long run will make them even more money. But Walt’s son, James, an ex-basketball star and erstwhile ne’er-do-well, who after seven attempts has finally passed his bar exam, is not happy with his father’s accommodation to Len’s "pretentious" managerial style and lack of concern for maximum immediate profit.

To cut to the chase: A tornado touches down, and when the storm subsides Walt, who had apparently gone duck hunting with an employee despite the danger, is found dead of an accidental shotgun blast. But Ruth, who has been struggling to understand the fervor of Saint Joan, through a series of circumstances begins to have her doubts that the death was accidental. As she articulates her suspicions to the town’s reverend and others, the enemy of the people syndrome arises. All shy away from the dire consequences of non-accidental death– particularly the major authority figures of the reverend and the sheriff– and anathematize the accuser, not the accused. But Ruth, truly imbued with the spirit of the maid of Orleans, will not back down. As she tells her husband: "It hasn’t changed. In six hundred years! They were just hiding behind dogma and power and they still do."

This is Wilson’s essential theme and, for the most part, he expresses it skillfully.The characters are distinctive and memorable, and, if the plot perhaps takes a bit too long to really get going, it is, when it does, compelling. Wilson avoids the pitfall of most liberal writers and does not caricature and hence underestimate the representatives of Christian conservatism. He recognizes their formidable strengths–their thoroughness, their fervor, even their intelligence. (The director of Saint Joan can’t imagine why the reverend finds Shaw’s iconoclastic play heretical.) In the characters of the Reverend Bobby Groves and James Bates, Wilson paints the two fearsome faces of reaction. The former is the ruthless, calculating implacable right-wing ideologue and the latter is the infinitely greedy, conscienceless opportunist who– like bad money under Gresham’s Law–will drive out the good and, indeed, James’ political star is rising at play’s end. What can the Hochs, the people of good will do but leave? The play ends with Ruth as chorus singing the familiar folk lament: "If you miss the train I’m on / You will know that I am gone / You can hear the whistle blow / a hundred miles." Goodbye to all that indeed.

The current Signature theatre production is directed effectively by Wilson’s near-alter ego, Marshall Mason, his authorized directorial interpreter and collaborator from the earliest days of the now defunct Circle Repertory Theatre. Mason has assembled a uniformly first-rate cast of actors. Miriam Shor makes a fiery modern Joan of Arc and Matthew Rauch stands out as her idealistic husband. Early in the play there is a sequence when Len Hoch rhapsodizes on the art of cheesemaking. Rauch so evokes the glories of superb cheddar and provolone that you can almost taste them. This is Stanislavskian sense memory at its highest level of application. Appropriately, everyone has his or her distinctive character signature. All in all, after some relatively recent misfires, it’s good to find Lanford Wilson once again at the top of his dramatic form.