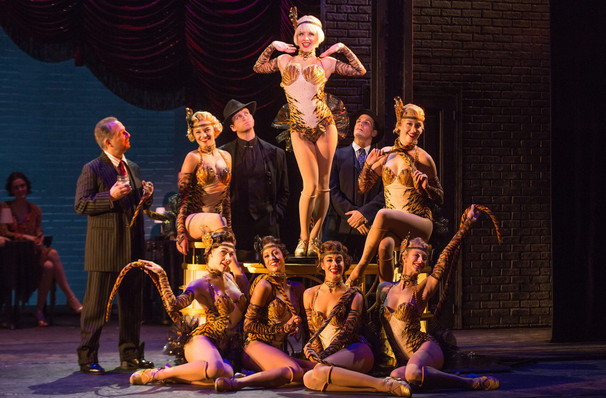 Direction and Choreography by: Susan Stroman

“Bullets Over Broadway,” is a stage adaptation of Woody Allen’s 1994 movie. It hit the stage in 2014. Set in the 1920’s, the touring company’s stop at the splendidly over-the-top, art deco, Hollywood Pantages Theatre (opened in 1930) is a particularly apt mise en scene. It is an over scaled production in an over scaled house, but both glitter.

There is always a neurotic intellectual protagonist in Allen’s work; David Shayne (Michael Williams) is the starving playwright in “Bullets.” His agent, Julian Marx (Rick Grossman), brings David sure fire backing for his new play to be produced on Broadway: mobster Nick Valenti (Michael Corvino). There’s only one hitch … there needs to be a significant part for Valenti’s current squeeze, gold digger Olive Neal (Jemma Jane). What could go wrong? Her classiest job to date is as a stripper, but she is certain she is an actress — no acting school required. With Valenti’s backing they are also able to secure the services of one of Broadway’s most venerable, if fading, divas, Helen Sinclair (Emma Stratton). That seals the deal. Both women are armed with ideas for enhancing their parts. Size definitely matters. David, classic author type, wants not a word changed from his original.

For his part, Valenti has Olive’s measure and assigns his hit man, Cheech (Jeff Brooks) to be Olive’s bodyguard accompanying her every minute she is at the theatre. Little love is lost between the two. Cheech is a man of the streets and a man of action. Bored just watching the laborious rehearsals Cheech starts making revision suggestions – may I point out the two pistols harnessed under that black suit. The suggestions are good, though. Pretty soon David is questioning his own authorship. Says Cheech, “That’s not how real people talk.” Pistols or not, he is right. It is a funny set up. Tensions abound.

“Bullets Over Broadway” is a musical, music supplied by original songs from the period. Many are familiar; some not. Parts are tweaked to suit the scene. Credit in the program goes to Glen Kelly, but it is not clear where Kelly’s contribution stops and Allen’s begins. The songs are the highlight of the evening. Best of all, from many aspects, is “Ain’t Nobody’s Bizness If I Do,” performed by Cheech and the Gangsters. Featuring a mélange of terrific tap choreography by Director Susan Stroman, pulsing lighting by Donald Holder, and a tightly rehearsed chorus of stylized gangsters, it brings down the house. Jeff Brooks steals every scene he is in.

Costumes, sets, setting and music are candy for the senses. Direction? That is open to question. It is polished and stylish, but heavy handed. What makes Woody Allen’s humor special are the asides, the little neurotic agonies that laugh at themselves. Stroman’s approach is more club-like. The enthusiastic orchestra often over-runs the singers when the words are the meat of the scene. Olive is supposed to be a bimbo, but when Olive reads her part in the first rehearsal her ineptitude is so over the top it ceases to be amusing. You would be forgiven were you to think, ‘please let this end.’ To be fair to Ms. Stroman, Allen serves up heavy handed scatological humor this go around. “Bullets” is probably not a good bet for your maiden aunt.

“Bullets” is froth delivered with a bam. The surface is highly polished. If you think about it a month later, you are most likely to remember “Ain’t Nobody’s Bizniss.” Go for the costumes, the sets, and the setting. The dancing and music will satisfy. Nuance and subtlety are best found elsewhere.