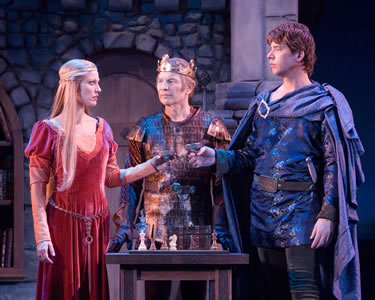 Broward Center for the Performing Arts

Michael York in “Camelot”? The press release promised an “edgy” production. Was “Rachel York”, the actress listed as playing Guinevere, the aging actor’s real-life bride? The thought process of a busy reviewer : ‘this show could be either a) nostalgic and great, b) dismal and depressing or c) both. Probably c).’ Still, an opportunity to watch Michael York playing the part Richard Harris made famous in the movie was worth the trip down from San Francisco to Silicon Valley. And how about the woman playing Vanessa Redgrave? Would she be sterling? Perky? Hot?

In this age of irony, what place is there for the traveling musical? These entertainment packages intend or pretend to be, Broadway-To-Go, and sometimes are productions of shows which just closed on the Greast White Way. But just as often, they are packaged revivals designed to appeal to the unsophisticated masses. How insulting! Rather than representing what is really going on on Broadway, you can end-up getting something more like the “Lawrence Welk Show” for a new-millennium. Star-vehicle revivals like “Camelot” sell a lot of seats, they’re clearly appealing to more than a niche-audience, but is that any reason to go? Why not turn the nostalgia-vehicle,into something defying modernity, a place where tap-dancing still hasn’t been replaced by hip-hop. Why couldn’t "Camelot" be, like "Spamalot", “cool”?

The American Musical Theatre of San Jose, imported this version of “Camelot” from January 17-Feb 11, 2007. “Edgy” turned out to be kind-of mis-leading. This was Omaha edgy. Maybe. Or edgy to the Lerner and Loewe/musical comedy purists. The book, it turns out, was messed-with. In a revised version produced by Liz Lerner, daughter of the original lyricist (the show came out on Broadway in 1960 to mixed reviews, but was made into a popular movie in 1967), and re-written by a son, Michael Lerner, a former Newsweek Magazine foreign correspondent, the second generation announced their intention to solve a problem their father had set-up in the original–namely, the disparity in tone between the jubilant first act and the darker, more tragic second. All of this in the midst of karaoke-standard songs like, “If Ever I Would Leave You,” “How to Handle A Woman”, and “What Do the Simple Folk Do?”.

Unfortunately, for all their tackling with the text and the settings (the costumes and settings, by Marcy Froehlich and John Iacovelli, respectively, were supposed to emulate a more pre-Raphaelite and non-“pointed hat” Renaissance look, according to a press packet review with Liza Lerner, who also happens to run an interior design firm) what it comes down to as a piece of theatre, is the sexual tension or lack thereof between the three leads. The Lancelot in this production, the big-voiced but somewhat oafish-looking James Barbour, was no Franco Nero. Rachel York, who turns out to be no relation to Michael, is a second-tier Broadway star whose voice, looks and charm pretty-much carried the show. But between the two Yorks and Mr. Barbour, there was just no reason to get carried away. The show was like middle-aged sex.

York the male equitted himself well-enough, the familiar British timbre of his movie-star’s voice was almost as enjoyable to listen to as were the still-prominent cheekbones and Julia Roberts-style lips to watch (which he had way before she ever did). Yes, there is a smarmy satisfaction to be had from watching the famous go through their paces, to see actors actually working. Live theatre is still about two hours of real-time human activity, something rarer and rarer, like good musical theatre. But it’s also still about an emotional connection established by the audience based on the performance of the real-time performers. This production has unfortunately had the life written out of it. Better to rent the DVD.