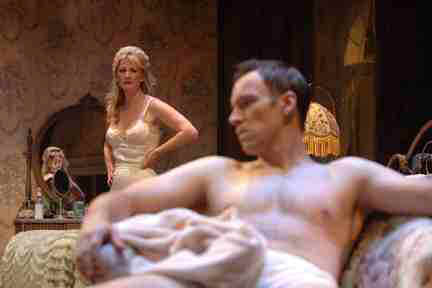 the film version with Elizabeth Taylor and Paul Newman:

Mendacity. That and one other word, also spoken by Jack Willis as Big Daddy in Tennessee Williams’ Cat on a Hat Tin Roof, ring out with silence around them, seize importance. The second word is tolerance. Homosexuality has come a long way since 1955, but not that far. Today, no one can care very much about a protagonist who is drinking himself to death because he can&#146;t come out of the closet. But the words of a dying father hold up to the test of time. And it doesn&#146;t hurt that Willis&#146; performance as the bellowing family patriarch is amazing.

Cat is supposed to be Maggie and Brick&#146;s story, the Elizabeth Taylor and Paul Newman image of marital dysfunction, Tennessee Williams-style&#151;the play takes place in their bedroom, after all. But this is 2005 and nobody cares about a protagonist who can&#146;t admit he&#146;s gay. Fortunately, Big Daddy, facing fatal cancer and turning fatherly, all of a sudden, still has a few things to say. Willis rumbles around, whines, dies a little, and generally fills up the stage at the Geary Theatre with a big, Shakespearean presence&#151;he&#146;s King Lear with a Southern drawl.

Rene Augesen, as Maggie, on the other hand, is blonde in the not-so-positive way. Her performance should be all horny and mad, not Methodist and pre-menstrual. She&#146;s supposed to eat up the scenery–make it the Maggie Show. Augesen just spouts the clever monologues, flits around in her slip, and tries to talk her way out of a hole. Augesen comes across like a good ex-cheerleader-type wife to Michael James Reed&#146;s pouty, ice-cube sucking Brick, but the sharp language coming out of her mouth seems designed for a Maggie who is edgier, tougher. The closet-case and the bombshell never go off in this production. The only guts come from Dad.

This major, Pulitzer Prize-winning play, is not Tennessee Williams coming emotionally clean. It&#146;s an exploration of stasis. Critics even questioned, in 1955, whether the narrative added up to anything. Perhaps for Williams, touching on gay themes was powerful in itself, even if his slant on it had the prerequisite self-hatred and despair.

The clan that turns Maggie and Brick&#146;s barren bedroom into a den, then a circus, is run with dotty delusion by Big Mama, played by Katherine McGrath. McGrath, a funny actress, wears a stuffed skirt to imply girth and has a convincing wacky intensity. Still, she&#146;s a wisp of a thing underneath all the padding, and makes sharp rather than round points with her scurrying. She&#146;s a nervous Mother, not a Big and bustling Mama.

Anne Darragh and Rod Gnapp as Sister Woman and Brother Man seem cut out of cardboard. This Hot-Roofed house has air-conditioning on the inside&#151;turned way up.