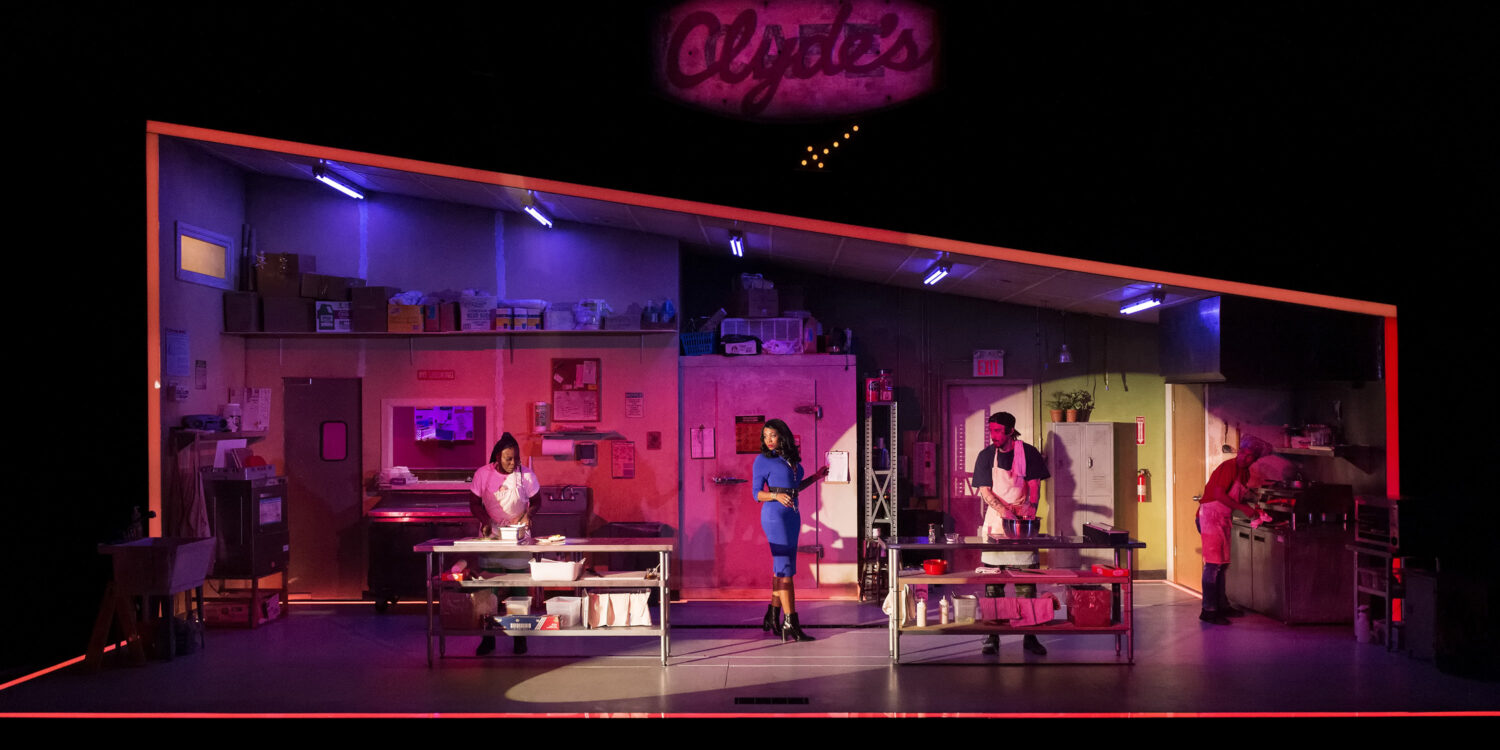 Come ye, come ye to Clyde’s Truck Stop for mouthwatering descriptions of sandwiches served up in 90 minutes of fast paced and funny dialogue. The undercurrent of social commentary comes from your own thoughts. Lynn Nottage is too busy writing the sharpest dialogue seen on the Taper stage in quite a while; she trusts audiences to get the point without smashing theater goers over the head with barbed commentary.

There are four ex-cons at the prep table in the dive’s kitchen. Each has a back story, each has a dream, each has a mountain to climb. But no time for kvetching; Clyde (Tamberla Perry), the owner of the truck stop cracks her whip with her razor sharp tongue. Yes, I said her. She emerges on stage in tight fitting, glittering dresses. One might say she is built like a brick shit house; why mince words? It is a truck stop. She too is an ex-con and could have learned her style from ruthless prison guards. We never really learn her story. She is too sly to disclose it. Who would choose to work for her? An ex-con with few options like the prep cooks we meet in the kitchen. Letitia (Nedra Snipes) is the only woman at the table. A single mom, she served time for stealing “oxy” to sell on the side when she went to a pharmacy to pick up seizure medication for her daughter. Raphael (Reza Salazar) robbed a bank using a BB gun. Motivation? He was determined to buy his girlfriend a Cavalier King Charles Spaniel she pined for. Montrellous’ (Kevin Kenerly) crime is not made clear for a while. He definitely did the time, but his ambitions are more clearly defined, loftier. Despite harassment from Clyde who wants more production, faster, and don’t go getting uppity, Montrellous dreams of turning Clyde’s into destination dinning, a temple of sandwich creation. His ambition fuels the others. Last to the table is Jason (Garrett Young), also an ex-con, a white guy covered with white supremacist tats. Unfortunately the tats are discernible in photos but not decipherable even from excellent seats. Jason is the lone white face in collection of brown and black. Is there tension? Yes at first, but none of these characters is as invested in racial squabbling as they are in making a life out of prison.

Playwright Lynn Nottage is the winner of two Pulitzers. Clyde’s is the most non-Shakespeare play produced in the U.S. in 2022. Typically her work carries a clear moral message. In Clyde’s she demonstrates her comedy chops. The dialogue is fast and fresh. It is the audience’s job to fill in the moral blanks. Nothing is sugar coated. Director Kate Whoriskey first directed Clyde’s on Broadway. To all appearances she has brought the same pacing and presentation to the Taper. Reza Salazar originated the role of Rafael at the Guthrie Theatre and again on Broadway. Originally the play was called Floyd’s, then came the death of George Floyd so it was changed to Clyde’s.

Could I nitpick? Probably, but it would not be fair. Clyde’s is entertaining and meaningful. In the words of the old Michelin Guides it is “worth a journey.”
Karen Weinstein