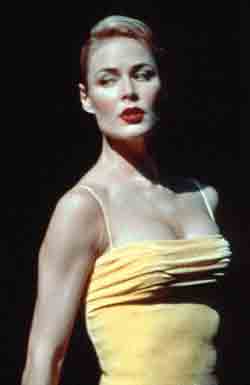 Like the 1975 musical megahit A Chorus Line, Contact grew out of an idea nurtured in a dancers’ workshop environment. But Michael Bennett’s glittering musical was rooted in the personal experiences of the dancers within the workshop. The book developed out of the lives of the dancers who are its lead characters; it was a dancing show about the dancers themselves. It also had a brassy Broadway score that you could leave the theater humming. In short, it was a consummate expression of the Broadway musical form.

Contact chooses a more limited, less ambitious palette, using recorded music, none of it original, to accompany three dance pieces. And while choreographer/director Susan Stroman did develop the show in workshops, the concept and story line were hers, expressed through her dancers. The result is a hybrid dance-with-dialogue theater piece, that doesn’t fully satisfy as either.

Stroman’s core idea makes up the second half of the program, from which the show takes its name. Wiley (Alan Campbell), a successful advertising executive, living alone in his fashionable New York loft, is suicidal, confronting the emptiness of his life. A phone call from his agent suggests meeting at a swing dance club. At the club, Wiley encounters a mysterious, glamorous girl in a yellow dress. She flirts with him, but he has trouble responding, especially in this milieu where connection is expressed through dance–Wiley’s not a dancer, a rather obvious metaphor for his unhappy condition of not participating fully in life.

Contactworks well as long as it stays in the swing club where there is little dialogue and a lot of athletic, sexy dancing. The choreography is a slick Broadway take on swing dancing forms, bringing into play as well Stroman’s expert knowledge of classical ballet–the parade of men strutting their stuff, competing for the attention of the heroine, for example, or any number of the corps formations. The girl in yellow is a descendantof Odette, the unobtainable ideal woman.

In the touring production, the role is played by Holly Cruikshank who must be about eight feet tall, seven of them legs. She’s long and liquid and lovely, as well as leggy, and she shines as a symbol of universal desire. Cruikshank is a marvelously cool dancer–when all the others are bathed in sweat, she somehow seems to be as fresh as when she first walked in. And, as with the best dancing, she makes the difficult look easy with grace and line and sexy (but not vulgar) charm.

Alas, when Wiley finally does dance with her, it’s a disappointment. Wiley isn’t much of a dancer; the premise, after all, is that he is just now starting out. But the conventions of dance would have worked better here than sticking quite so closely to the literal–when he dances with the girl the mood should be triumphant, liberating, and the dance should express that, suspending the plot contrivance in favor of the emotion that dance can so well express. What should be a joyous, climactic moment on the stage isn’t.

The first half of the program consists of two shorter pieces. Swingingfantasizes from a Fragonard painting, "The Swing"(a rather sentimental bit of rococo frou frou), and adds a more lusty sexuality and a mischievous sense of humor. It’s light as a feather and equally forgettable. Did You Move is centered on the escape fantasies of a browbeaten wife, placed in an Italian restaurant in the 1950’s. It is made worthwhile by the fine acting/dancing of Meg Howry, who poignantly captures the pain of being trapped in an abusive relationship.