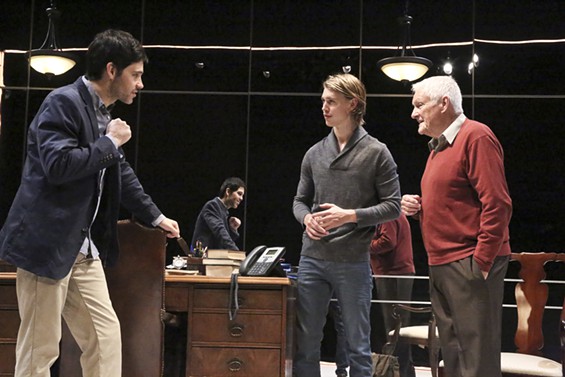 Spoiler Alert: Animals are, indeed, hurt in this play.

They’re the oxen gored by playwright Steven Drukman and they can be found at almost any university today — from the president to a major department chair to a lowly instructor and all the way down to two soon-to-graduate students, one a spoiled elitist and the other too clever by half to recognize just how damaging her cleverness can be to others.

Drukman clearly knows what’s going on behind all those ivy-covered walls. Time was when a diploma was an affirmation of four years dedicated to learning at a college or university, a badge of hard-earned achievement. For many affluent students today, however, the diploma is about on a par with a Disneyland hand-stamp, an inky little icon that shows you’ve been there, done that — but not necessarily how well or to what purpose.

The rich are different from you and me, as F. Scott Fitzgerald famously noted. To which the smart-asses of my college days used to say: “Yeah, they have more money.”

But Fitzgerald goes well beyond that: “(The rich) possess and enjoy early, and it does something to them, makes them soft where we are hard, and cynical where we are trustful, in a way that, unless you were born rich, it is very difficult to understand. They think, deep in their hearts, that they are better than we are.”

And now, entering stage right, is Bradley (Austin Butler), the shaggy blond embodiment of Fitzgerald’s remark. Poised to graduate from that top-ranked university in a few weeks, along with his on-again/off-again girlfriend, Sarah (Lyndon Smith), Bradley hails from a wealthy Republican family in Grosse Point, Mich. He is a graduate of a prestigious Swiss college prep school, an expert skier who’s schussed down European and American slopes, prefers a bicycle to a BMW and already holds a legacy admission to an excellent law school. On top of all that, his uncle has a great job waiting for him, post-law school.

But there’s a problem. A small problem, to be sure, given Bradley’s pedigree and background, but a problem nonetheless: an instructor, Jeff (David Clayton Rogers), has given him a grade of “incomplete” for a 20-page report on postmodern literary criticism. Seems that Bradley plagiarized every one of those 20 pages from a dozen or so critics and stitched them together into a not-so-crazy quilt about authors and the critics who parse their work.

Bradley wants Jeff to remove that yellow tag of incomplete from his transcript because, you see, he really didn’t plagiarize anyone; he simply gathered the best of the best commentaries on the subject into one overall document. And with Mom, Dad and other family members coming for commencement two weeks hence…well, surely Jeff can see how embarrassing it will be if Bradley doesn’t get his hand-stamp of a diploma.

He wheedles and begs and implores Jeff to no avail, then turns to J. Trumbull Sykes (Orson Bean), chair of the English Department, and finally to the university president, unseen. Bradley is sophistry incarnate.

(A brief personal note here: This reviewer once worked for a major newspaper that hired a behavior writer to make sense of all the Warm & Fuzzy trends then blowing across the land. She was well-credentialed in psychology but had only a whiff of journalism. Then one Sunday she produced a lengthy and impressive feature story on some timely topic. Immediately, a young assistant professor at a local university let out a shriek: the article was her research paper awaiting publication in a professional journal. Summoned from home to address this matter, the behavior writer denied the charge of plagiarism. All she’d done was a bit of “media transfer.

“What the hell is ‘media transfer’?” the managing editor, a gruff old-time newsie, asked.

“It’s material prepared and accepted for one communications medium like a scholarly journal,” she answered, “and all I did was transfer the material to another, different medium, the newspaper.”

The editor showed her first the dictionary definition of “plagiarism” and then the door).

Bradley’s dilemma is complicated by his on-again/off-again relationship with Sarah, his bedmate and helpmate. The least developed but most enigmatic character in this play, Sarah is a very bright young woman very much into postmodern literary criticism. She reveres the grand old man of this academic field, known variously as “Professor Sykes,” “Trumbull” and plain old “Trum,” and, having studied under him, knows his literary preferences.

Which brings us to the tipping point of this play — the convergence of Sarah’s well-intentioned help; Bradley’s opportunism and sense of entitlement; Trumbull’s conflicted reactions to both the students and his promising instructor; and Jeff’s fate of doing a good deed and being punished for it. More than this I don’t want to reveal. It would spoil the play for you.

I will tell you that director Bart DeLorenzo draws the best from these four players; he and they do credit to Drukman’s script. Takeshi Kata’s set — a three-sided mirrored box — may emphasize the characters’ intense introspection, but it had the unsettling effect of a fun house whose mirrors infinitely reflect the same scene.

Upon further reflection, maybe Kata and DeLorenzo are on to something……