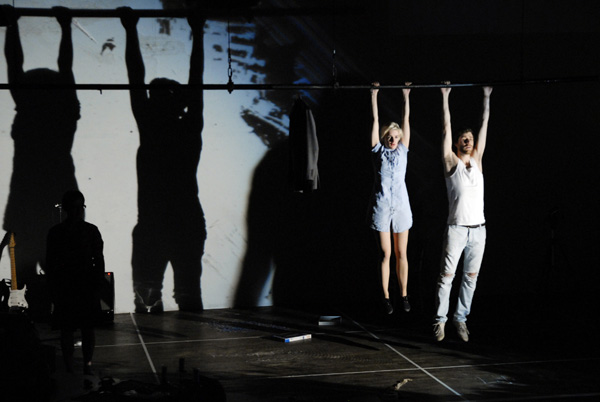 If the Druid Theatre and Martin McDonagh represent the most prominent
international face of neo-classical Irish theatre, then Pan Pan
Theatre probably best represent the edgier contemporary dimension as
they continue to present themselves on the international scene. The
company frequently foregrounds technological avant-gardism, certainly
active deconstruction of representational and logistical frameworks,
and continue to advocate for a radical aesthetic voice on the Irish
stage. The Crumb Trail has been on tour since late 2008, garnering
strong notices in Germany, Denmark, and the US. We know this not
least of all because actor Bush Moukarzel, not quite yet in character
near the beginning of the show, reads excerpts from actual press
coverage of the play on tour, and somehow the gesture does not appear
wholly narcissistic. It is rather a signal of the sense of
contemporaneity and context – that the play is alive and in progress
as a work of theatre – and invites debate and active reception.

The show is a melange of interconnected musings on the
responsibilities of adulthood in the digital age, or indeed any age
in which people have sought to reproduce and raise children. It takes
the fairy tale Hansel and Gretel as its fairly significant jump-off
point. There is no particularly coherent attempt to ‘tell’ the story
of Hansel and Gretel though most of its narrative markers are there.
Writer Gina Moxley (who also stars) focuses more on the meaning of
its first act – impoverished parents abandon their children in the
woods as a solution to their resource problems – than its resolution
as a fable. What are the responsibilities of an adult towards their
children, and at what point and why do children assume adult
responsibilities? Is the abandonment of the children in the woods
(‘have you learned about metaphors in school yet?’ asks Moxley as
‘Gina’ – the mother and also later the witch) in any way akin to
allowing children unsupervised access to the internet, or
surrendering their sensibilities to the despair of boundless
possibility in a world where democracy and capitalism seem to be
failing humanity? An ecstatic moment of dance (much included), free
of form or order can also represent the terror of the instinctual,
which may soon turn to sexuality, introverted or extroverted. As
Gretel encounters an online chat room identifying herself as 28 year
old Aoife (28 year old Aoife Duffin plays the role), are we still
dealing in fantasy and fable? Indeed, are we ever dealing in anything
else?

The show is a multimedia heavy collage deploying YouTube feeds, a
Skype conversation, overhead projectors, live music and dance,
reflexive direct address (the actors introduce themselves by name,
then tell us their characters share those names), all contributing to
various degrees of mirroring and shadowing that provide layers of
narration and signification. Scenes will be played out on YouTube by
either the cast or by other chosen (and some well-known) performers,
then mimiced or re-presented ‘live’ in the theatre, sometimes
duplicated, sometimes with variances wherein they are slotted into
the story, such as it is. Meanwhile the important question of how
long it takes to bake a loaf in a bread-maker is answered, along with
that of how quickly quick-dry paint takes before an actor can crawl
across it – little physical markers of time and space that feel
playful rather than very significant.

Though there is a serious point being made by this whirligig of
referentiality, the overall tone is definitely sardonically
humourous. The poker-faced performances refuse psychological
complexity, driving the audience back to the big picture created by
the imagistic excess and the ‘classical’ fable at the heart of
things. The reflexivity becomes comical, demanding awareness of the
process of construction and the means by which we extract meaning
from what we see. When the witch screams in hysterical laughter
sufficient to trigger childhood or folk memory of the embodiment of
evil, her apology that she’s not using to talking, delivered with a
flat expression, reflects on the story while enjoying the moment.
Even what is ‘random’ here is highly mediated (literally), and the
result is the impossibility of engaging on one level. There is an
element of evident self-parody inherent in the doubling of YouTube
clips, and Moxley’s appearance in a Gingerbread Man suit at the
climax can evoke nothing but a recognition of the quality of
nightmare and farce to which the show aspires from beginning to end.
However scenes in which ‘Arthur’ (Arthur O’Riordan) is interrogated
on suspicion of inappropriate contact with a minor retain a frisson
of real drama even as they blend abstraction and intertextuality with
the dynamics of the scene. There’s a dare we say Kafkaesque quality
to this encounter that evokes associations with yet another set of
labyrinths.

The show is superbly executed and never as chaotic as it pretends to
be. Director Gavin Quinn appears as a spectral presence by the use of
his Skype contact list and, presumably, his laptop, but his ordering
presence is felt along with that of Moxley as author (and performer)
and the evidently collaborative nature of the performance (O’Riordan
quips that Moxley didn’t exactly write it all herself). There is a
high degree of precision here, deployed as a means of complication.
The result isn’t entirely obfuscated, but there is certainly a sense
that we as a species are being led by our own volition into the deep
dark forest with a very uncertain sense of where we are going to end up.