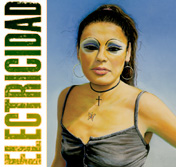 Learning that Electricidad, is an adaptation of Sophocles&#146; Electra, should not deter even the most classic-aversive among theater goers from indulging in the wit and wisdom of MacArthur-genius-award-winning-playwright Luis Alfaro&#146;s new play.In fact it is totally unnecessary to know the classic in order to appreciate the new.The violence, taking place over generations, between groups who would have more to gain by working together; ill-placed loyalties; the passion of revenge being mistaken for an expression of love; the inability to forgive dooming future generations to more of the same–these themes are played out in ghettos, over borders, on desert sands, between religious groups, and even within families. The tragic results are seen in the pages of every newspaper.

Electricidad is set in the East Los Angeles Barrio, close to downtown civic and financial centers. Here live generations of Latino immigrants, their children and their children&#146;s children. Spanish is spoken, but Spanglish, a combination of English and Spanish, is more dominant; Alfaro&#146;s ear is perfectly tuned. The Barrio can be a colorful but tough place. Loyalty to a gang often supercedes loyalty to family.They call themselves Cholos.The police are seen as the enemy, not as helpers or defenders in an emergency. It is a colony unto itself where the code of honor is based on &#147;the old ways of Cholo. Simple.You shoot.I shoot back.&#148; It’s an eye for an eye, and the enemy of my enemy is my friend … for now.

Los Angeles slums do not look like Eastern tenements.Visitors are often surprised to see individual houses with yards, but the physical does not negate the poverty and alienation within.With two iconic palm trees in the background, a California bungalow sketched by timbers and roof, Rachel Hauck&#146;s set effectively portrays this dichotomy.In the front yard Electricidad (Zilah Mendoza) is protectively stretched across the body of her dead father that she has snatched from Forest Lawn.It is a shrine surrounded by candles and offerings, and she has vowed not to leave nor to allow the body to be removed until the murder of her father by her mother is avenged.

Family ties are weak. Plump grandmother (Alma Martinez) in a too short skirt and garish blue eye shadow, tries to persuade revenge-obsessed Electricidad to give up her vigil by saying, &#147;You watch your grandma&#146;s back.She watches yours.&#148;And Electricidad&#146;s sister, Ifigenia (Elisa Bocanegra) who has been absent for some months while her family just assumed she was once again in jail, announces she has been in a convent where contemplation has led her to such wisdom as &#147;the Sacred Mother gave us Cholos switchblades.&#148;

Three neighborhood ladies in housedresses sweep and busy themselves outside the yard; they are the chroniclers of the Barrio, colorfully chatting away with commentary on everything.This Greek chorus is saucy, informative, evaluative, witty and wise, yet every bit as much a victim of circumstances.All dwell in the culture of Cholos where juvenile hall, jail time, low rider cars, and tattoos are marks of status.No one is even looking for a way out.

Sophocles provides the form, but it is Alfaro&#146;s capture of the fast paced cadence and spirit, as well as the tragedy, that is the substance.Dialogue is peppered with Spanish words, but entirely comprehensible whether or not the Spanish is understood.It is quick and it is clever.Sprinkled throughout are references to the outside world (anytime minutes, Oprah, Target) representing the Barrio&#146;s superficial connection to the American mainstream lying just across the freeway. But the Cholos have no real connection with the opportunities existing outside of the Barrio.The tattoos that are the keys to their identity are scars that limit the ability to exit.

The walk and the talk of the Barrio are captured perfectly under Lisa Peterson&#146;s direction.If this is theater that teaches the hopelessness of perpetuating old grudges and the helplessness of being born to society&#146;s underclass, it does so not by rubbing one&#146;s face in the dirt. Alfaro entertains and he builds strong characters, delivering his message with humor and without patronization.