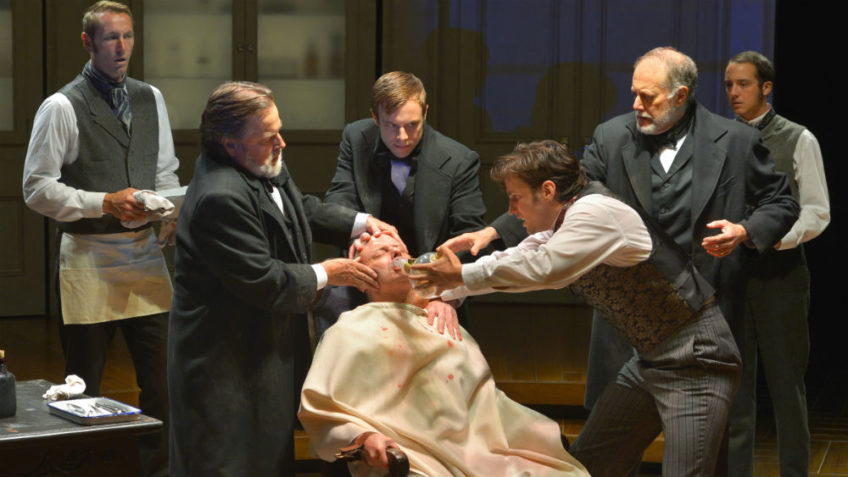 Faced with the prospect of surgery, most of us consider the cost to our wallet and the inconvenience of recovery to our lifestyle. It would never cross our mind that agony, in the form of excruciating pain on the operating room table, is part of the bargain. But that’s exactly what patients faced and feared before the discovery of anesthesia in the 19th century.

“Ether Dome” tells of the men, politics and ambitions that led to this medical milestone as well as the unintended consequences that turned health care into the big business it is today. This West Coast premiere at the La Jolla Playhouse is a co-production with Alley Theatre, Hartford Stage and Huntington Theatre Company.

Playwright Elizabeth Egloff packs too much information into the confines of a two-act play. There are 25 roles portrayed by 14 actors. The characters to keep your eyes on are the tragic Dr. Horace Wells (Michael Bakkensen turns in a heartbreaking performance), William Morton (played by Tom Patterson, this confidence man manages to fool the audience as well the authorities of the day), Dr. John Collins Warren (Richmond Hoxie in a commanding performance) and Dr. Charles Jackson (William Youmans lends sympathy to a complicated character who has only himself to blame for his many troubles). Director Michael Wilson draws equally powerfully performances from each, but even reducing the lineup to four, it remains hard to pinpoint exactly from whose point of view the story belongs.

The action begins in the Connecticut home medical office of Wells, where Mrs. Wadsworth (Linda Libby) is having a tooth extracted. She screams at the top of her lungs throughout the bloody procedure. Once concluded, dental apprentice Morton loosens the wrist and ankle straps that bind the patient to the chair and prevent her from kicking or clawing. With pride, Morton announces that the job took little more than two minutes. Speed is what constitutes stellar Victorian medical credentials.

But Wells isn’t satisfied. He wants to alleviate patient suffering during surgery as well as buy time to perform his work with more skill. Intrigued by the pain-masking ability of nitrous oxide (laughing gas) — at the time used primarily as carnival show entertainment — he tries the gas on a few patients with remarkable results.

Meanwhile, the ambitious Morton convinces his mentor to bankroll him in opening a dental office in Boston. Instead of attracting patients, Morton campaigns prestigious Massachusetts General Hospital (MGH) to allow Wells to conduct a public demonstration of nitrous oxide in surgery. Wells is reluctant and for good reason: His work will be scrutinized by a hostile, egotistical group of Harvard-educated, Boston Brahmin surgeons who do not consider a dentist from the sticks to be their peer. Things go wrong, ruining Wells’ reputation, career, and partnership with Morton.

But we haven’t seen the last of Morton, as he seeks to attach himself to Jackson, a chemist and reluctant surgeon at MGH who regularly faints while assisting in amputations. Morton pesters Jackson about other compounds that might eradicate pain. To get Morton off his back, Jackson gives him a vial of highly volatile sulfuric ether which, when inhaled, will knock a person out cold. Morton experiments (sometimes explosively) on his wife’s pets.

There are few medical milestones that can be pinpointed to an exact date. This is one of them. On October 16, 1846, Morton uses ether to sedate a patient at MGH and — in a stomach-churning scene — one-time detractor, Dr. Warren, painlessly removes a horrendous neck tumor. It is worldwide news and heralds the modern era of anesthesia.

But who should receive the credit and reap the rewards? Should it be Horace Wells for the idea of anesthesia using gas? Should it be Charles Jackson for figuring out ether’s chemical properties? Or should it be William Morton who renames the compound, applies for a patent, and wastes no time in securing a lucrative government contract to supply the gas to military field hospitals?

All thought-provoking questions given the location of the La Jolla Playhouse on Torrey Pines Mesa, where every research institute has a technology transfer office and bioscience companies employ intellectual property officers to ensure biomedical discoveries are protected, licensed, and fully developed.

Costume designer David C. Woolard gives us surgeons at work in blood-stiffened aprons. Even off duty, they walk about in morning coats smeared with operating-room grime. Morton is dressed like a dandy in line with his over-confidence in his abilities. The women are attired as denotes their station in life: Long-suffering Elizabeth Wells (Amelia Pedlow) in plain housedress and apron, well-heeled Mrs. Wadsworth corseted and buttoned to the neck, and Morton’s pampered young wife Lizzie (Liba Vaynberg) a confection of satin and ribbons.

Scenic/projection designer James Youmans meets the formidable challenge of rapidly changing scenes through the use of versatile panels. Artful (albeit occasionally shaky on opening night) projections of exterior and interior architectural elements against this backdrop place the action in Connecticut, Boston, Paris and New York City. Open panels bathed in fluttering light evoke a busy train station. And, projections of blood flowing down glass like sheets of rain add to the visceral drama of surgery.