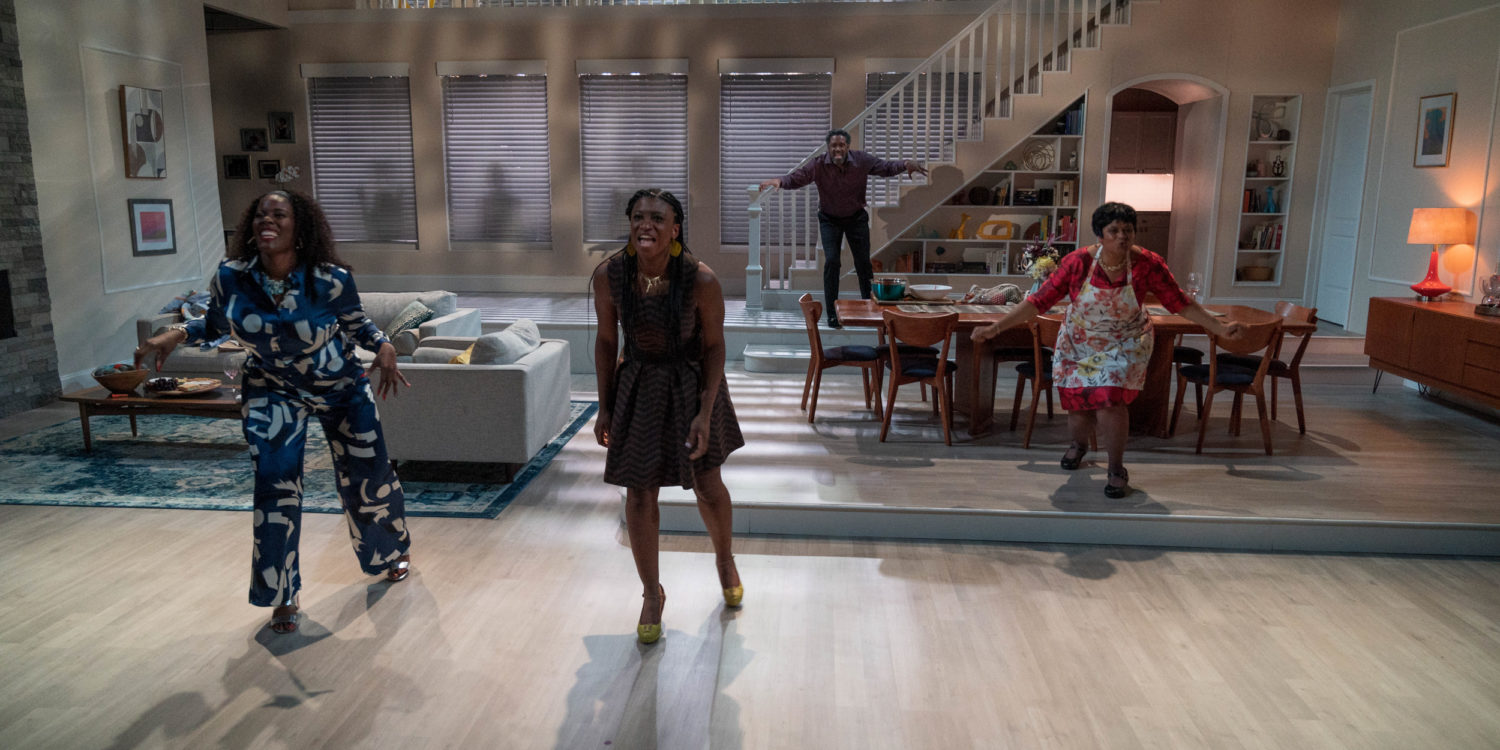 Playwright James Ijames was awarded a Pulitzer Prize earlier this year for his play ‘Fat Ham’ which was a virtual production by the Wilma Theater in Philadelphia where Ijames is the Lead artistic director. ‘Fat Ham’ premiered during the pandemic and is currently on stage at the Public Theater in New York. And currently at the Wilma, Ijames has directed Jackie Sibblies Drury’s challenging, thought-provoking ‘Fairview’ which won a Pulitzer-Prize in 2019.

‘Fairview’ is a satire wrapped in a racial polemic, with surreal theatrical elements, well it’s a lot of things at once. It opens in a full of laughs, sitcom of the Frasier family. a tv sitcom where Drury doesn’t just write punchlines, but witty soliloquy.

As Beverly is trying to prepare and ‘perfect’ family dinner in celebration of her mother’s birthday, while she snipes and flirts with her husband Dayton, ordering him about dispatching him into the kitchen rather than going herself, as she endlessly peels carrots. As she dances around, listening to the radio, the songs becoming distorted. Something is off kilter. When her sister Jasmine arrives. And they start to antagonize each other, but back off when things get too heated.

They gossip about their mother and absent brother, who may or may not show up for the dinner. Meanwhile, Beverly’s daughter Keisha comes in from school and asks her Aunt to convince her Mom that she can put off college for a year. But Beverly’s is stressed over everything, endlessly pealing carrots, bickering with Jasmine, Dayton and now Keisha,  It’s all too much and she faints.
Suddenly, on the other side of the living room blinds, barely hidden, are four white characters- Suze (Krysta Apple), Mack (Keith), Bets (MK Toumanen), Jimbo (Matteo Scammell. They are partially hidden behind the blinds of the Frasiers’ windows. As Jimbo poses the incendiary question “What race would you be if you could choose?”  Bets, an eastern European émigré reacts to the absurdities of the question and the answers given. Suze who fantasizes about …well again, can’t say more without giving too much away.

Eventually, the hidden group starts commenting on this black family, as the argument devolves into a screaming match of outrageously wrong views on people of color. Meanwhile, Beverly, Dayton, Jasmine, and Keisha, re-enact, in pantomime, everything that has happened in the house so far. Drury goes through the narrative looking glass and the play turns into something much more challenging. The Frasier drama resumes when Beverly being revived from her faint and the other guests finally arrive, namely Keisha’s girlfriend, the brother, and the grandma.

Is the daughter’s friend emo girlfriend a trans woman, is the grandmother the former maid of one of the white people arguing about race. Is the father a gambler, does he have syphilis. Matteo Scammell’s Jimbo  is the embodiment of white appropriated black culture, or so it might seem. There is even a ….well, don’t want to spoil this meaty plot.

Meanwhile, Ijames, and ‘movement coordinator’ Justin Jain. inspired elements of the  sustained ensemble, most notably the precision of the silent pantomimed redo. Add to that there is a lot of dancing that breaks out in the household, with witty Josephine Baker quotes, to the electric slide, to hip-hop choreo, is laced through, to take the edge off of the absurdity.

Ijames restructuring Drury’s three acts into an uninterrupted 90+ minutes. A risky, but because of his precision and this cast, a smart decision, even if all Drury’s theatrical polemics and dramatic sandbags take more than a minute to unpack. Meanwhile, nothing throws this fine ensemble cast, even as Drury (& Ijames staging) drives this play off the safe rails.

Melanye Finister’s Beverly takes wounded command, with hilarious pathos. Jaylene Owens is able to reframe every conflict with a glance or a cogent soliloquy to sum up the issues, from her point of view of course. Lindsay Smiling’s Dayton makes the most of his economic dialogue as family peacemaker. Brett Robinson’s Keisha, trapped under the family microscope, yet communicates an avalanche of home truths about racial division in America. Matteo Schammel’s Jimbo a full-tilt portrait of hijacked black rap culture (or so it might seem).

The raucous character comedy dissolves into a dramatic polemic of home truths about race in America. Drury doesn’t opt for a tidy resolution in ‘Fairview’ but tosses an even more challenging the ending into the audience’s lap. Drury and Ijames don’t just break the fourth theater wall, they tear it down. for a truer discourse, from the stage and, perhaps beyond.

All of the elaborate technical aspects of this production are first rate starting with Lawrence E. Maten’s impeccable set designs in tandem with Thom Weaver’s sculptural lighting and Daniel Ison’s sound designs.