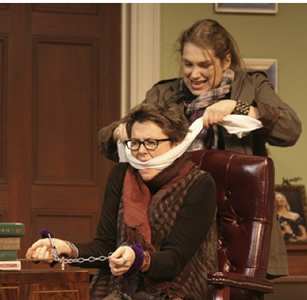 Female of the Species

It is fun for awhile, watching Annette Bening as the no-holds-barred, foul mouthed, raging feminist author spewing angry word plays, and looking like she is aiming for a spot in the Guinness Book:  world’s highest blood pressure.  Ninety five minutes later – with no intermission – it was a relief to have the screaming stop.

Bening plays Margot Mason, a feminist pundit who, with her sensational titles such as “The Cerebral Vagina” and “Reality Vagina” (book covers of which hang on the wall of her oh so tasteful, and oh so expensive and remote, upstate living room) was a sensation in the early days of Women’s Liberation.  A self-proclaimed provocateur she feeds on her own anger.  She is suffering writer’s block and it is the focus of her current eruption.  She has only written 243 words.  The book was due at her publisher last week.

Uninvited, Molly (Merritt Weaver), a former student, enters the sanctuary of rage and becomes grist for Margot’s mill.  She is a former student whom Margot does not recall — Margot is so self-involved she does not recall very many people — and whom Margot had ruthlessly attacked as talentless.  As Molly’s story unfolds her own rage quickly boils over and she pulls out a gun threatening to kill Margot, but not before locking the author to her desk with handcuffs,  gagging her, and forcing Margot (not a good listener) to hear the details of Molly’s misery.  She was abandoned at birth by a mother who embraced Margot’s brutal doctrine enjoining women to cast aside motherhood in favor of self-fulfillment, and who threw herself under a train clutching Margot’s most renown work, “The Cerebral Vagina.” Molly, who has read, dissected, and digested everything Margot has written, and who has had herself sterilized, hurls both facts and doctrine back at Margot who barely shows any comprehension, certainly no guilt or compassion.

Enter Margot’s daughter, Tess (Mireille Enos), in melt down mode.  What rebellion is left for the offspring of a radical?  Convention, of course.  Tess, whom Margot finds totally uninteresting — and that is a real crime in her book — never had a career, married a hedge fund guy, and is the mother of 3 children ages 6, 4, and 2.  In frustration at the household noise Tess has left her children untended, walked out of her house, boarded a train, taken a taxi, and is now at her mother’s house wanting to curl up in her old room.  Merritt Wever does an outstanding job of total screaming hysteria.  She applauds Tess’s plan to kill Margot.  Each woman screams her own rage.  It falls on the others’ deaf ears.  There is a lot of screaming.

In due time, Bryan, Tess’ husband the hedge fund guy who irons his children’s clothes and makes soup; Frank the virile taxi driver who infuriated Tess by talking about himself and his divorce all the way from the station; and Theo, Margot’s publisher who has come to get Margot to produce a book to save his company, all wander in through the same garden door and end up screaming.  The only time anyone shows concern about the gun is when it is pointed at him.  Narcissistic, did you say?  Just a tad.

Director Randall Arney has said that “Female of the Species” reminds him of “the best of Shaw – an idea play where you get to chew on relevant, current things but the ride to arrive at these large ideas is such a fun one.”  Word plays, yes, but Shaw’s dialogue is so much more finally wrought, his political and social ideas are more developed.  Much of “Female” is like a very clever sitcom on HBO.  Funny, yes, but superficial, and much too loud to be taken very seriously.