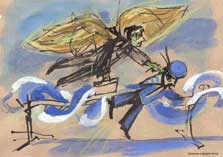 Forbidden Christmas or the Doctor and the Patient

Baryshnikov as a car? Well, stranger things have happened.

There are many strange happenings in Forbidden Christmas or the Doctor and the Patient, which is a fairy tale, an anti-Stalinist polemic, a religious tract or all the above, depending on what you choose to take from it. Commissioned by the Baryshnikov Foundation from innovative Russian playwright-puppeteer Rezo Gabriadze, the 96-minute &#147;entertainment&#148; is currently on a world tour.

But back to that automobile. The story &#150; such as it is — takes place in Gabriadze&#146;s native town in the Soviet Republic of Georgia. The time is the 1950’s. Chito, a sailor (Mikhail Baryshnikov), returns from duty to find the girl he loves (Pilar Witherspoon) married to another man. In despair, he throws himself into the sea and drowns, only to be rescued by a passing angel (the graceful and versatile Luis Perez, who keeps popping up to save the day). When Chito comes to, he is fixated on the car which bore his beloved from him. So, fastening a cranking device to his shirt and donning a pair of galoshes to serve as tires, he becomes his own vehicle. Baryshnikov is never as funny as when he turns that key, revs up with every muscle in his body vibrating and takes off. All this happens without a word being spoken. It&#146;s the back story to the main piece and it takes a full 20 minutes, mostly because Gabriadze, both as playwright and director, seems to favor slow motion. In spite of some really charming scenic devices (also by Gabriadze), such as waves turned by hand while a little boat floats merrily atop them and the passage of time indicated by alternating suns and moons on sticks, it gets a bit tedious.

Things don&#146;t speed up that much when the real action begins, seven years later. Chito, comfortably ensconced as the town madman, is still chugging along as a car. On Christmas Eve, the town doctor (John DeVries) falls into an exhausted sleep after making his endless rounds, only to be awakened by Chito who summons him to the side of a sick child. The rest of the play involves their journey across town, losing each other and reconnecting, running into other people on the street and, in the doctor&#146;s case, in dreams. Some of it is lovely, a sort of ballet with a pair of electrical transformers being a case in point &#150; except there doesn&#146;t seem to be a point to this and much of the other extraneous business.

The basic sense of the thing–sickness as a metaphor for life in Stalinist Russia, delusion as the only sanity possible when an entire society has gone mad and the power of love and belief to transform a grim reality–comes through loud and clear, if a bit simplistically, without all the extra window dressing. But the extra effects, moving screens that set the time and place, tiny Christmas trees (and one human one) being placed and re-placed on the stage, a puppet and wondrous lighting by Jennifer Tipton, do contribute to the magical effect of it all. Forbidden Christmas is pretty to look at. But not so pretty to hear. A track of what one must assume are Georgian folk songs plays pretty much throughout and makes one really grateful not to have grown up in Georgia.

The cast is excellent, Lopez being the standout. DeVries grumbles his way through the doctor&#146;s role, appropriately enough and Witherspoon has a sympathetic scene at the end. But, of course, all eyes are on Chito, the man who thinks he is a car. Baryshnikov exhibits his usual boyish charm in the role, seeming much younger than his 56 years. The iconic ballet dancer exercised his acting chops long before he hung up his dancing shoes, in the movies The Turning Point and White Nights and, most recently, on the small screen as Alexander Petrovsky, the suave but narcissistic painter who was Sarah Jessica Parker&#146;s penultimate lover in the closing season of Sex and the City. Misha may indeed have a whole new career in front of him. But he deserves a better vehicle than Forbidden Christmas.

(19375)
$20.99 (as of January 23, 2021 - More infoProduct prices and availability are accurate as of the date/time indicated and are subject to change. Any price and availability information displayed on [relevant Amazon Site(s), as applicable] at the time of purchase will apply to the purchase of this product.)

(18132)
$2.85 (as of January 23, 2021 - More infoProduct prices and availability are accurate as of the date/time indicated and are subject to change. Any price and availability information displayed on [relevant Amazon Site(s), as applicable] at the time of purchase will apply to the purchase of this product.)