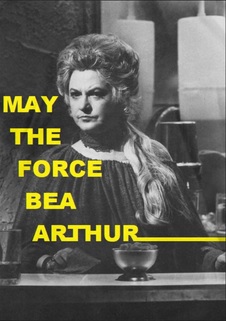 “Special”
by Andrew Osborne
directed by Kerr Seth Lordygan
Coming this holiday season to Theater of NOTE (Hollywood, CA)
ticket, merch, and crowdfunding information for the play available at: baitshop.org/stage

That was the reaction of Lance Guest (star of 1984’s “The Last Starfighter”) to a recent workshop reading of “Special”, an original comedy scheduled for production this coming December at Theatre of NOTE in Hollywood, CA about the strange-but-true backstage drama surrounding the notoriously awful “Star Wars Holiday Special” on the 40th anniversary of its one-and-only network broadcast in 1978.

As detailed in the play (a heavily fictionalized account of real life events), after shattering box office records with the space opera that would come to be known as “Episode IV: A New Hope”, George Lucas was under ulcer-inducing pressure to start production on a sequel (while the newly minted stars of the film were floundering in less than A-list projects like “Leave Yesterday Behind”, a TV-movie where the late, great Carrie Fisher played a horse trainer in love with a paralyzed polo player mortified by his inability to have sex with her).

To keep the “Star Wars” brand in the public consciousness during the long drought between the unexpected original smash and “Episode V: The Empire Strikes Back”, an unlikely coalition of filmmakers, variety show veterans, Canadian animators, network suits, and marketing mavens from The Star Wars Corporation and Kenner Toys joined forces to create a television event (and never-released tie-in merchandise) for the 1978 holiday season.

Lucas envisioned an expansion of the “Star Wars” universe with a visit to Chewbacca’s home planet for a holiday celebration, detailing his ideas in a “wookie bible” to guide the writers tasked with expanding the story. As it happened, though, one of those writers was Bruce Vilanch, whose credits at the time included “The Brady Bunch Variety Hour” and the Donny and Marie show.

Vilanch’s broad comic sensibilities meshed nicely with the razzle-dazzle show biz instincts of Ken and Mitzie Welch (the producers CBS assigned to the project) while clashing badly with Lucas’s mythmaking and the vision of the project’s first director, David Acomba, who left the project after falling severely behind schedule (and reportedly clashing with the formidable Bea Arthur, a friend of the Welches inexplicably cast as a barmaid who even more inexplicably bursts into song in a scene at the Mos Eisley cantina).

With Acomba gone and Lucas distracted by “Empire”, CBS tapped Steve Binder, another TV vet, in hopes that he’d be able to rescue the chaotic production the same way he’d managed to revive Elvis Presley’s career as director of the King’s legendary 1968 comeback on NBC.

Yet “The Star Wars Holiday Special” was already far too weird and ungainly for any one person to save, with a glassy-eyed Carrie Fisher warbling wookie carols side-by-side with goofy Harvey Korman comedy sketches, cameos by Jefferson Starship and Diahann Carroll (as some kind of singing softcore hologram), and a 10-minute Boba Fett cartoon by the Canadian animation company, Nelvana, which turned out to be the only well-received part of the two hour special.

But fans and critics hated the rest — as did George Lucas, who’s reportedly said,
“If I had the time and a sledgehammer, I would track down every copy of that show and smash it.”

Fortunately, Lucas’s busy schedule prevented him from playing Whack-A-Mole with all the countless bootlegs of the program in circulation since the original Thanksgiving ’78 broadcast, some of which inevitably found their way to the internet where the “Holiday Special” lives on 40 years later as a beloved cult classic, readily available for viewing (in its godawful entirety) on YouTube.

Meanwhile, the IndieGoGo campaign for “Special” (by Andrew Osborne, directed by Kerr Seth Lordygan), is scheduled to launch, appropriately enough, on May the 4th (Star Wars Day), with ticket, merch, and crowdfunding information for the play available at: baitshop.org/stage

And May the Force Bea Arthur!