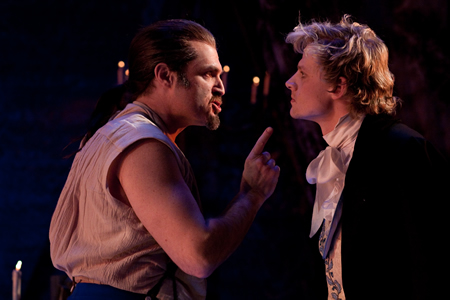 Terrence McNally is premiering his new play Golden Age at the Philadelphia Theatre Company for three weeks before it heads for the Kennedy Center who is presenting it as part of McNally’s Nights at the Opera, a mini retrospective of his opera plays that will include revivals of previous hits The Lisbon Traviata and Master Class. The later premiered at PTC in a celebrated production starring Zoe Caldwell as Maria Callas in 1995 and won the Tony that year for best play.

PTC and McNally have had fertile collaborations and recent bumpy ones. Some Men, a time-traveling panorama of gay mores was dramatically changed after the PTC run. As was last season’s Unusual Acts of Devotion, starring Richard Thomas. Golden Age, a three-acter, comes to PTC more fully formed  but will most certainly be edited, because it seems obvious there might be a wonderful play here that is almost lost in narrative excess.

Backstage at the Theater Italien in Paris on Jan. 24, 1835 for the opening of Vincenzo Bellini’s opera l Puritani, with the four greatest singers of that time in the cast is definitely McNally turf. The theatrical soufflé of this glamorous group starts to rise instantly. The temperaments of the singer are warming up their voices and the histrionics, known thereafter as the Puritani Quartet.

An ill Bellini is also skulking about, otherwise has the vapors working out score changes and because his rival – mentor Rossini is in the audience. The composer is running interference between warring divas and the pissing contest among the tenor and baritone, the former padding his tights with apples. This has the potential to be grand McNally.

As the vainglorious Vincenzo, Jeffrey Carlson has so much to say, he trips over his lines and director Austin Pendleton seems to have given him some of his own hand-waving, recoiled physical comedy to work with. But, Carlson goes for a frothy operatic performance with a heart of gold.  His proletariat boyfriend Francesco, snarling at the art’s pomp and bourgeoisie, tries to emotionally support an ever sicker Vincenzo.

The play lurches toward melodrama with McNally’s lacey dialogue, but he hedges his bets with an endless stream of inside opera banter and stagy one-liners and musings on the role of art that sound like padding.

The sex romps among the straight singers have more heft that the central affair of Bellini and his ‘friend.’  McNally passes up a meatier arc about mores of an 19th century gay relationships.  Roe Hartrampf has a lot of tedious lifting to do as the boyfriend. In contrast, the diva absoluta, Maria Malibran, whose voice is “like a wild animal’ McNally makes her more talky than necessary. Amanda Mason Warren as the Malibran, working a fab burgundy and black opera gown, gives a multi-mannered and hypnotic performance as Maria. Some over-broiled exposition almost does her in, but, like Carlson, she overcomes it.

She spars with the other soprano, play with juicy brittleness by Rebecca Brooksher. Also fine is Noon Lee’s Lablache the undervalued basso, dispensing practical advice scores as written and as played. Marc Kudisch as the crotch obsessed Tamburini is able to use his natural baritone and swashbuckling physique to great effect.

Christopher McFarland gives his homely tenor Rubini bravado and George Morfogen (late of the raw HBO prison series Oz) does a charming turn in one scene as an ailing and sharp tongue Rossini, with the equally charming Dante Mignucci as his young page.

The cast is in constant motion around Santo Loquasto fantastic two-tiered backstage battlement is a jewel box of backstage grit mixed with gilt French drawing room pieces. Fruit enhancements notwithstanding, Richard St. Clair’s costume design is colorful and rich with period detail.  Together, these stage pictures are witty and charming.  And the sound design by integrating offstage sections of the opera by Ryan Rumery, is flawless.

McNally has created wonderful characters in Golden Age and Pendleton could bring more rhythm to the pacing. This is an ensemble simmering. Sandbag some
of the narrative excesses and let these characters sing.