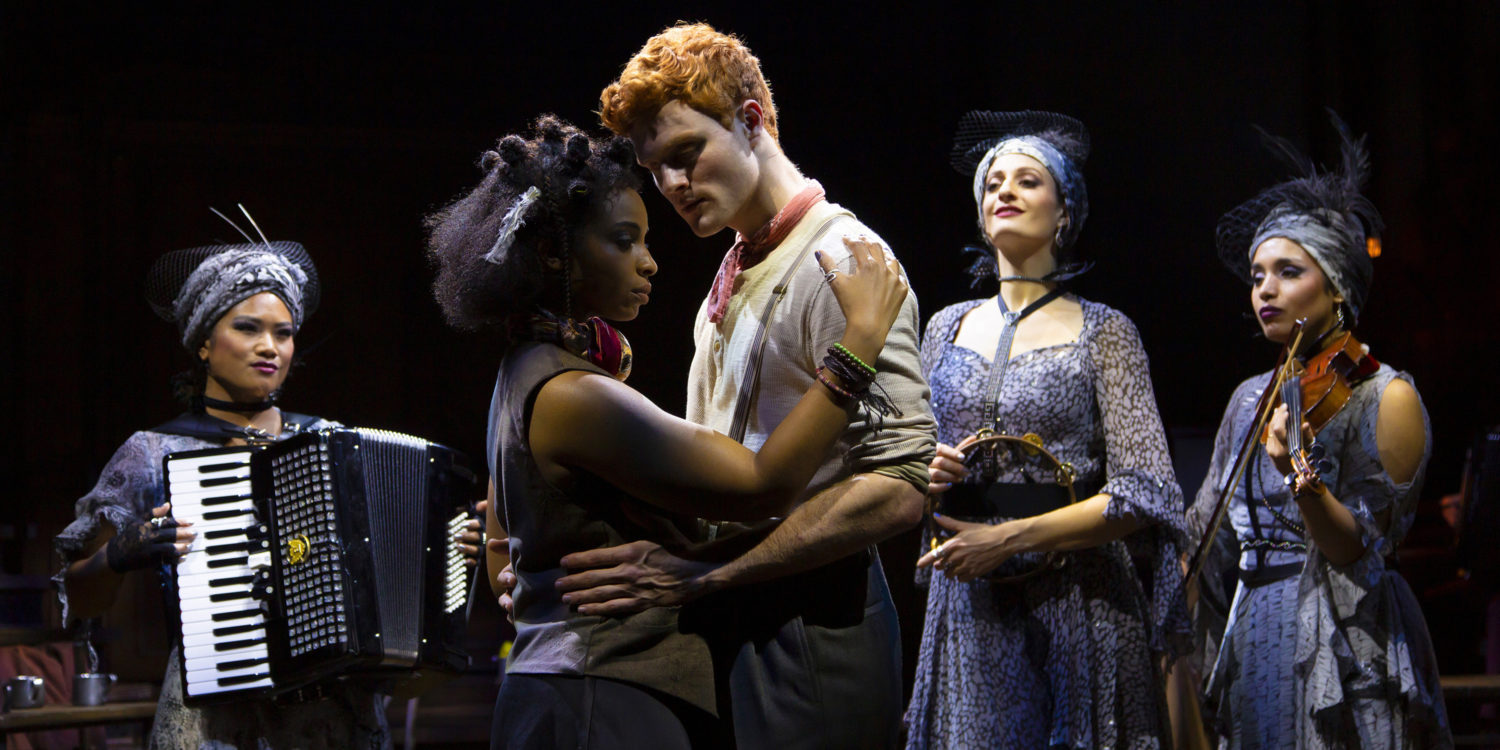 After a 13 year incubation, during which time gestation began with a single song, Hadestown came to fruition in 2019 as a two and a half hour, full-fledged Broadway production. It is a big baby. Nominated for 14 Tonys and winning 8, it also garnered a Grammy for Best Musical Theater Album. Whew. Toes do tap.
There is no question but that Hadestown is a crowd pleaser. The kind of production that is guaranteed to bring in the tourists wanting to see a big new Broadway musical. From the complex stage set by Rachel Hauk to Anais Mitchell’s hyperactive score it captures your attention. It is a two for one tale: you get the ever popular and ever doomed Orpheus (Nicholas Barasch) and Eurydice (Morgan Siobhan Green), plus the myth of Hades (Kevin Morrow) and Persephone (Kimberly Marable). Greek scholars may have their squabbles with the mixture of characters and the roles that some play; I will leave those squabbles to them.

Do I have a squabble? Actually I do. Although the jazzy, Dixieland influenced, touch of gospel score keeps the action buzzing, overall it seems repetitious. The dancing keeps pace with the music, but it too is repetitious. Anais Mitchell is the songwriter, but the 13 year gestation feels like there were a few too many workshops with a few too many contributions resulting in a slick presentation designed by a committee to be guaranteed to sell.

The set is a complicated and flexible mélange of midcentury bistro and hell. Hades, who reigns from the balcony above, is the owner. As Hades, Morrow’s seductive bass oozes evil as he woos his bride Persephone as well as the revelers below. To them he offers the promise of worldly goods in exchange for working in capitalist hell. The message is clear. “Way Down in Hadestown” there is no way back. Mitchell wrote the song “Why We Build the Wall” in 2006, but the Trumpian inference rings true. It is an ode to the woes of the trapped working class. Orpheus is the naïve young waiter/busboy in the bistro. He is working on his song which he cannot finish. Ragamuffin Eurydice wanders in seduced by his song. They fall in love, what else? But she is easily seduced and next she finds Hades’ promises more irresistible. She too becomes figuratively enslaved by capitalist hell. We all know what ultimately happens. Hades makes the offer Orpheus cannot refuse and Orpheus fucks it up at the end. You are not really coming for the story, you knew the ending. Unfortunately in this telling nothing pulls you in emotionally. Part of the problem is that Barasch is an anemic Orpheus. He is a pretty boy who lacks soul. Green is a screeching needy Eurydice who is also not compelling.

The most compelling elements inn Hadestown are the musicians who are arrayed on both sides of the stage, and the three Fates (Belen Moyano, Bex Odorisio, and Shea Renne). The Fates impishly slither and slink around the stage providing wry commentary. They are far more seductive than Orpheus and Eurydice. Bex Odorisio in particular can hold your full attention. I am tempted to say they are worth the price of admission.

So what is my message? Is Hadestown worth seeing? It is entertaining. But will you remember it next year? I doubt it.
Karen Weinstein