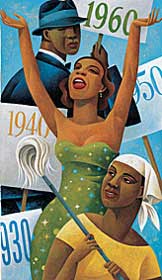 Hallelujah, Baby! boasts a stellar list of musical theater artists: playwright Arthur Laurents (West Side Story and Gypsy), the composer Jule Styne (Funny Girl and Gentlemen Prefer Blondes), and lyricists Betty Comden and Adolph Green (authors of such songs as &#147;Make Someone Happy,&#148; &#147;New York, New York,&#148; &#147;The Party&#146;s Over&#148;). Winner of the 1968 Tony Award for Best Musical, Hallelujah, Baby! is a crowd-pleaser which the Arena Stage is presenting in an updated version with a new song by Jule Styne, additional lyrics by the late Adolph Green&#146;s daughter, and a new ending. Since it’s not a show that stimulates an audience to walk out of the theater humming the music or musing over issues raised by the story, the successful reception resides more in its formulaic approach, the delivery of the actors, and agreeable staging.

Georgina (a role originally created by Leslie Uggams) narrates the story of Hallelujah, Baby in a post-modern style that allows her to talk directly to the audience and to remain about 25 years old through out the duration of the play. The actors, under the direction of Arthur Laurents, all do commendable work in developing characters that portray a story of racial prejudice in the United States during a one hundred year period.

Suzanne Douglas as Georgina, the black girl who refuses to spend her life cleaning the house of the white folks her mother kowtows to, energizes the cast with her ability to poke fun at the inhumane conditions that chained blacks in America to menial jobs. That same push-pull behavior allows Douglas to make Georgina exude sexual allure that not only draws her boyfriend Clem, but also the white man Harvey who helps Georgina get jobs as an actress. What makes the intensely focused Georgina so sexy is her drive to get to the top. Such songs as the ballad &#147;My Own Morning&#148; and the roof-raiser &#147;Hallelujah, Baby&#148; demonstrate Douglas&#146; range and appealing talent as a singer. Ann Duquesnay blends a stereotypical Aunt Jemima approach to her portrayal of Georgina&#146;s momma with a powerhouse hot gospel that shows Momma&#146;s pent up pride.

Both characters, Georgina and Momma, are revealed to the audience as actors capable of assuming whatever personality gets them what they need to survive. The audience understands when Momma struts around the stage singing, &#148;I Don&#146;t Know Where She Got it,&#148; referring to Georgina&#146;s success as an actress, that Georgina is her mother&#146;s offspring.

With such strong women characters, the leading men Curtiss I&#146; Cook as Clem and Stephen Zinnato as Harvey pale in comparison. The imbalance results from the way the story is written and directed and not from any lack of skills on the part of the two male actors. Clem progresses from waiter to Communist party member to World War II soldier, until he becomes a successful civil rights leader. Harvey initially wields power as a white man giving Georgina opportunities on stage but becomes a bitter nobody when he finally realizes Georgina will never chose him.Harvey&#146;s decline, in combination with a bus ride scene situated in Georgia where Harvey is forced to leave Georgina&#146;s side and move to the front of the bus, speaks to the issues of reverse racism.

The two men who reflect Georgina&#146;s energy best are the synchronized tap dancers, Tip (played by Randy Donaldson) and Tap (Gerry McIntyre). There is something oddly exciting about the men who have similar facial features but who are mismatched in size. Tip who is a head shorter than Tap also appears as a witch in an offbeat Rastafarian Macbeth scene in which Georgina has a part. Georgina and Tip lose their federally funded WPA jobs because the third witch (played by Laurie Gamache) is affiliated with the Communist Party. Maybe playwright Laurents means to imply ironically that women stir up trouble like the witches of Shakespeare&#146;s Macbeth by not following the lead of their men, but Laurents also offers in the words of Georgina, &#147;What good is principles? It don&#146;t pay da rent.&#148; The musical ensemble of seven players, including the musical director David Alan Bunn on piano, is on stage and earns the right to be there. Projected images and attractive lighting enhance the minimalist sets, serving to focus the attention on the actors.

Finally arriving in the new millennium, Georgina is invited to the White House and asked by the President&#146;s spokesman to sing a spiritual, a style of singing she has never used in her work on stage and which stereotypes her as a black person and demeans the success she has achieved. Upon questioning the President&#146;s man, Georgina learns that the President hopes to use her performance for political gain. This request wakes her up to the issues of civil rights.Will Georgina find her way back into the arms of Clem? The reprise of &#147;When the Weather&#146;s Better,&#148; a song Clem sang to Georgina early in the play, suggests the possibility. More important is that Georgina, as an African American, learns that &#147;success does not make your colorless.&#148;