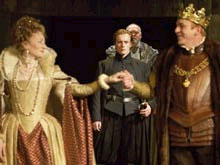 This summer’s Hamlet is the first production to be directed by Michael Boyd since he took over as the Royal Shakespeare Company&#146;s artistic director. At Stratford, Boyd has created two overlapping cast ensembles: one for the Shakespeare Tragedies season here in the main house and the other for the season of Golden Age Spanish plays at the Swan Theatre. Thus, there has been a welcome return to an ensemble dynamic and energy based upon a kernel of (mostly young) actors appearing together in several plays throughout the season. This dynamism and energy are clearly evident in Boyd&#146;s inaugural production of Hamlet.

Also evident is a return to the traditional Elizabethan production and, more importantly, a triumph of story-telling over elaborate interpretation. In Boyd&#146;s production, everything serves the text – every line is clearly thought through and presented with emotional commitment by his cast and this most famous and oft-quoted of Shakespeare&#146;s plays appears freshly dramatic as if every line were newly minted. The staging by Tom Piper is minimal, with a semi-circular graphite wooden wall with large doors at the center and hidden doors and windows in the wall for the eavesdropping scenes. Vince Herbert&#146;s atmospheric lighting provides the scene changes and as a result the play moves swiftly and relentlessly even though presented without cuts.

The play emerges as the intelligent political thriller which it is. Rarely has every twist and turn of Hamlet&#146;s plot to revenge his father&#146;s murder and the resulting battle of wits against his uncle, King Claudius (whom he suspects), been so compellingly conveyed. At every moment the audience is with Hamlet in his attempts to prove and revenge his father&#146;s murder by Claudius and in his struggle to overcome his passionate revulsion both at the deed and the resulting "o&#146;erhasty" marriage between Claudius and Hamlet&#146;s mother Gertrude.

It is this crippling revulsion rather than procrastination that is at the core of Toby Stephens&#146; flamboyant, witty interpretation of the role. He delivers a highly entertaining performance and has an immediacy of rapport with the audience, especially in the soliloquies. Stephens’ prince is possessed of intelligence, poetry and incisive humor–a great mind in overdrive. But his sardonic humor and sarcasm hide a righteous anger at the political machinations that surround him. His ire initially flares out in odd moments but is palpable when he realizes that his lover, Ophelia, and his friends Rosencrantz and Guildenstern are reduced to pawns in Claudius&#146; game. Naturally, it erupts into a torrent of rage when he confronts his mother with her guilt in the famous closet scene which is played minimally with one chair rather than a bed, so that he physically traps Gertrude with his accusations. Gertrude (Sian Thomas) hides her guilt behind her overly made-up face and elegant dresses until the facade dissolves under pressure from her son. She even appears to have a change of heart and supports her son as best she can in the closing scenes.

The political background of the enmity between Denmark and Norway and the theological and philosophical elements of the play are all presented with complete lucidity. The characters truly believe in heaven, hell and purgatory &#150; they are real places, part of their emotional life and also at the core of their motivation &#150; which is more difficult to convey in a modern dress production. For example, in the most memorable moment of the evening, Greg Hicks as the ghost of Hamlet&#146;s father slowly shuffles in on a ramp through the audience bent double over a broad sword, mouthing words he is unable to speak until he is face to face with his living son. Hicks powerfully embodies (physically and vocally) the suffering of a soul in purgatory and the look of horror on his face when he tells his son he must return to the "sulphurous flames" is truly harrowing. It becomes clear that Hamlet must not only revenge his father&#146;s murder but also that his father will not be set free from the torments of purgatory until he does so, thus adding to the emotional burden under which he is living through much of the play.

With his meticulous production Boyd presents a gallery of highly detailed characterizations. By the end of the performance the audience feels they really know the characters. Forbes Masson is an affecting Horatio &#150; giving the impression he fully understands his friend Hamlet. Ian Drysdale presents an imposing Claudius, not to be crossed, but guilt ridden at murdering his brother in the chapel scene. Richard Cordery is a sinister Polonius &#150;a cold political animal under the bumbling affability he present to the Court. He cruelly dominates his daughter Ophelia (Meg Fraser) in their chilling scenes together. As her brother, Gideon Turner, movingly portrays his love for her and at the end the desperation of realizing he has been yet another pawn in Claudius&#146; game. Meg Fraser&#146;s Ophelia is fresh and alert. If she cannot stand up to her father, she certainly does to her lover, Hamlet. Her mad scene is modern and robust rather than pre-Raphaelite and waif-like; there is a frenzied anger at life behind her meanderings.