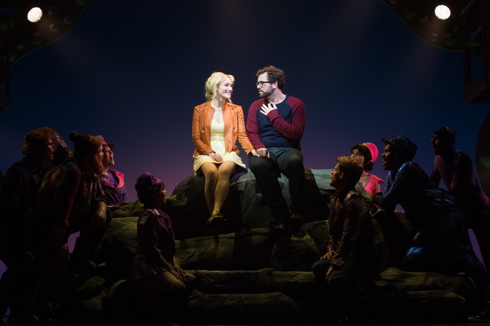 Betsy Wolfe and Matt Bittner with the cast of "Up Here"
© La Jolla Playhouse. Photo by Matthew Murphy

Book, music and lyrics by Kristen Anderson-Lopez and Robert Lopez

“Up Here” is billed as a musical comedy with a lot on its mind. Perhaps it has a bit too much on its mind.

It’s a lot of moving parts.

Then there are the subplots: Lindsay’s former boyfriend Ed (Nick Verina), worming his way back into her affection, and Lindsay’s autistic brother, Tim (Eric Petersen), carrying a torch for Tina (Zonya Love), who recently fired him from an electronics-store sales position. Tossed into this mulligan stew is a rock outcropping in Central Park that utterly fascinates the character known as Child (9-year-old Giovanni Cozic) who delivers a lesson on plate tectonics complete with puppet dinosaurs. A pause while we come up for air.

This ambitious effort, not fully realized, is a collaboration of husband-and-wife team Robert Lopez and Kristen Anderson-Lopez, the songwriters behind the Disney runaway hit “Frozen.” Despite accomplished singers (Wolfe’s voice is a standout) and the gallant, pitch-perfect efforts of music director Aron Accurso, there are no earworm-worthy gems in the production.

An impressive set, courtesy of scenic design by David Korins, frames the action in what appears to be Dan’s pulsating wetware, brought to life by a phantasmagoria of changing colors and firing neurons (courtesy of lighting designer David J. Weiner). Underscoring the affect is the wizardry of sound designer Peter Hylenski. Costume designer Ann Closs-Farley and hair-and-wig designer Lisa Chan-Wylie pull out all stops with dazzling garb for the stream-of-consciousness army inhabiting Dan’s grey matter. Choreography by Joshua Bergasse is worthy of the Joffrey. While amusing, the creations of puppet designer Michelle Zamora finally cross the line into sensory overload.

“Up Here” remains a work in progress.