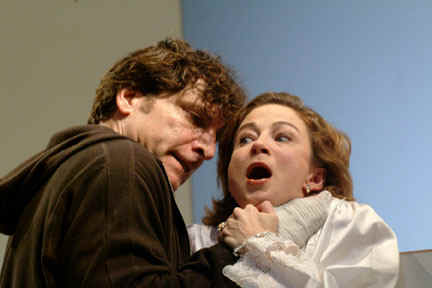 Hilda, a first play written by a French-Senegalese novelist, Marie Ndiaye, is a taut one act about modern day slavery in which a wealthy woman becomes obsessed with the new nanny she employs. In the spirit of both Pinter and the filmmaker David Lynch, there is a creepy, unlikely essence to this play, but with absurdity, ideas of control and class are brought into greater relief. It&#146;s always a little too unsettlingly close to possibility to discount the conflicts presented.

Ndiaye has created a scenario where the subject of the play, the young maid Hilda, is never seen. The main actor is the mistress of the house, Mrs. Lemarchand (Ellen Karas), who develops a relationship with Hilda’s husband, first to glean more information about her new employee, then to exert her increasingly irrational power over both Hilda and him. In the tautly controlled, developing hysteria in Karas’ performance, anything seems possible. Marco Barricelli, as Frank, the husband, has few actual lines, but simmers with hatred from the beginning.

The boiling point which is inevitably achieved is perhaps the most skillfully achieved part of the play. The fact that Mrs. Lemarchand&#146;s control over Frank is never diminished, even in his physical presence and threat, is exceedingly well done. Money talks.

Unsettling, French in nature, but just as American in its discomfort with the ramifications of class, power and control, Hilda works. Ndiaye is a theatrical voice to be watched. Hilda is stripped-down but full of ideas. It is chilling and absurd, but engrossing. The production in San Francisco by the American Conservatory Theatre, at their intimate Zeum venue, was directed by Artistic Director Carey Perloff and is part of ACT&#146;s program for the development of new writers and writing. This production is the English-language premiere of the play, which premiered in 2002 at Theatre de l&#146;Atelier, in Paris.