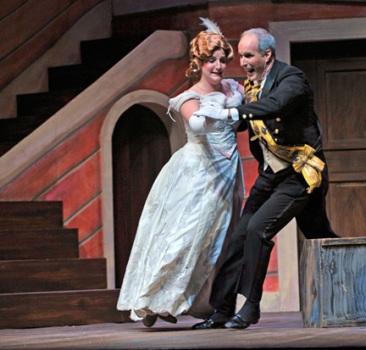 So give three cheers and one cheer more for the jolly writers of the “Pinafore.” Lyricist W.S. Gilbert and composer Sir Arthur Sullivan were the rock stars of their day, creating an entire genre within the musical theater, devotees of which—and there’s even a word for them: Savoyards, named for the original theater where most of the shows were performed—continue to band together in troupes (mostly amateur, since the old D’Oyly Carte loosed its hold on the material and closed) to celebrate these works more than a century after they premiered.

One wonders how much longer this can go on. Given our own climate of amplified rock musicals and 3D movies, it is possible that two generations hence, nobody will know who Rodgers and Hammerstein were, let alone Gilbert and Sullivan, who are a rather acquired taste, with their topical references, somewhat stilted dialogue and plots that center on such archaic things as class distinction, effete poets and children mixed up by their wet nurses. Plots also are highly formulaic, usually involving at least one pair of hapless lovers, a dictatorial father or guardian, a comic character who delivers those famous “patter songs” and a mezzosoprano who either throws a monkey wrench into the workings of the plot or resolves things with a last-minute revelation. Wonderful stuff, and fans can’t get enough of it.

One of the best is “H.M.S. Pinafore (or the Lass Who Loved a Sailor)”; the venerable Lamplighters, a troupe that has been touring the Bay Area for some 50-plus years, is presenting it (in one of the best productions this reviewer ever has seen) in various venues from the East Bay to the North Bay to the Peninsula to San Francisco through Aug. 21. The voices are amazingly good; Maestro Brett Strader’s orchestra excellent and costumes by Judy Jackson MacIlvaine and ship-shape set by Rooster Productions are as pleasing to the eye as the music is to the ear. Director Jane Erwin Hammett keeps things moving (and not just in the two-steps-to-the-right, two-steps-to-the-left manner seen in too many G&S shows) and there are plenty of laughs. What’s not to like?

Josephine (lovely Lamplighters favorite Jennifer Ashworth, who will share the role with Lindsay Thompson Roush) is the daughter of the captain of a ship of the line anchored off Portsmouth. Her father (the excellent Jonathan Spencer, who will share the role with Behrend Eilers) plans to marry her off to the foolish, foppish Sir Joseph (a very funny F. Lawrence Ewing) a higher-up in the Admiralty. But alas, Josephine is madly in love with a common seaman, the handsome Ralph Rackstraw (a fine Michael Belle, making his company debut), although she knows he is below her station in life.

The complications mount as Ralph and Josephine’s plans to elope are foiled by Dick Deadeye (a delightfully smarmy Robby Stafford) but, of course, true love triumphs in the end—as it always does in these operettas—with the help of Little Buttercup (a fine Sonia Gariaeff; see reference to last-minute revelations by the mezzo above). Also outstanding were Michele Schroeder as Cousin Hebe and the Lamplighters chorus of sailors and Sir Joseph’s female groupies.

With songs like “I’m Called Little Buttercup,” “When I was a Lad” and “Never Mind the Why and Wherefore” and some high-stepping hornpipes, “Pinafore” is a delightful cruise. You are strongly advised to book passage before it sails over the horizon.