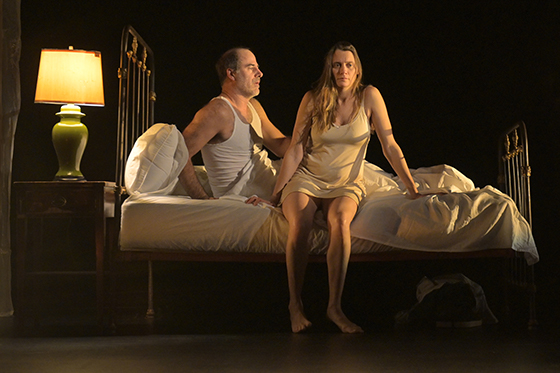 Created and Directed by Geoff Sobelle

Why see a play that has no traditional plot or storyline to speak of, in which the performers are silent, accompanied only by occasional music? If the play is “Home,” the answer is that one should see this novel, noteworthy and appealing production because it presents the unique creation of a two-story house on stage in front of the eyes of the audience. It then proceeds to portray a variety of experiences within the house’s existence by its various residents over the life of the dwelling.

“Home” is quite an imaginative and inventive 105 minutes of refreshing absurdist entertainment, with an extraordinarily talented cast and production team. It has already played successfully in venues including New York, Edinburgh, and Sydney, and will continue its travels when it leaves Berkeley on April 21, 2019. “Home’s” creator, as well as one of its lead performers, the gifted director, physical comic and creator of absurdist performances, Obie award-winner, Geoff Sobelle, is the force behind “Home” (his “all wear bowlers” was performed at Berkeley Rep in 2006).

Sobelle and his fellow performers celebrate the experience of “Home”first by physically building the house (props to Scenic Designer, Steven Dufala), then by portraying diverse groups of residents, who presumably lived in it one after the other. But we see the residents all occupying the house at the same time. It’s a great concept. So, one person goes to sleep in a bed, and another person miraculously awakes in the same bed (kudos to Steve Cuiffo, the Illusion Designer). The various home dwellers brush their teeth and perform other daily bathroom rituals moving/dancing flawlessly around the others as though the others were not there (incredible choreography by David Neumann). It must be challenging for director Lee Sunday Evans to coordinate all of the activity, but she makes it look easy.

From the house’s artistic creation and the early magical scenes of daily living, the performance moves to some life events: birth, graduation, marriage, and death. Unsuspecting audience members are coaxed on stage and given written instructions, supplied with headphones, or guided by performers as to their roles. The stage became crowded, a band was playing, and it was difficult to follow all the activity on stage at times. The tumult was likely intentional, but I found the life rituals a bit less successful than other portions of the play.

One word about the music. Talented singer/songwriter Elvis Perkins accompanied Home by playing guitar and alto-harp. Unfortunately, I had some difficulty understanding the Dylan-esque lyrics at times. It is worth the time to read the poetic lyrics in the program. I’m not sure that the music added to the production, but it’s hard to prove a negative.

I confess that, in general, I prefer theater in which I can involve myself in the characters, their shifting emotions and their transforming story. In other words, all things being equal, I prefer fiction to nonfiction reading and narrative to non-narrative theater. But for a non-narrative performance, or what Geoff Sobelle calls a “live documentary,” “Home” is an inspired, ingenious, entertaining theatrical experience.