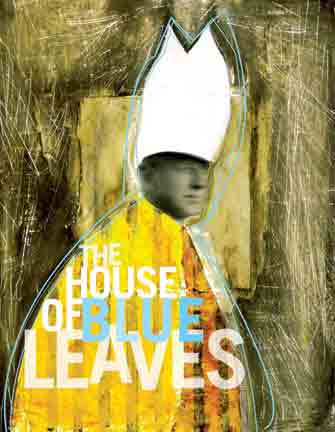 A circus always is fun and John Guare&#146;s The House of Blue Leaves, newly opened at Berkeley Rep, is a three-ring lollapalooza. You&#146;ve got your hero, Artie (Jarion Monroe), a wannabe songwriter who feeds the animals at the zoo while he&#146;s waiting for fame to knock on the door. He&#146;s the sad clown. Not only does he write lousy songs but nobody wants to listen to them. Nevertheless, Artie dreams on.

His wife, Bananas (a wacky, wistful, wonderful Rebecca Wisocky), who really lives up to her name, is an antic clown &#150; but, locked in her delusions, her emotions controlled by pills, she can be pretty sad too. Then there&#146;s Bunny, Artie&#146;s micro-managing mistress, played in a yeoman performance and a fake New York accent by last-minute substitute Jeri Lynn Cohen. Bunny wants Artie to lock Bananas up in the loony bin, run off to California with her and peddle his songs to a big Hollywood producer who was his childhood friend. She seduces him with the promise of her own brand of haute cuisine. But she&#146;s saving it for after the wedding day. She doesn&#146;t balk at sleeping with him but she won&#146;t cook him a morsel until then.

Even more clowns pile out of the Volkswagen in Act Two. The Pope is visiting New York amid great hoopla and Artie&#146;s son Ronnie (Adam Ludwig) has gone AWOL from the Army in order to assassinate him, thereby gaining his own five minutes of fame. Then three nuns beg shelter from the cold in order to watch the proceedings on Artie&#146;s television set. A hearing-impaired Hollywood starlet, fiancee to the aforementioned producer, arrives, bearing gifts of bourbon and flowers. She&#146;s on her way to Australia to have an ear operation but her plans go awry from the moment Bananas mistakenly gulps down her hearing aid transistors, thinking they are tranquilizers.

Finally, near the end, the producer himself, the famous Billy Einhorn (a suave Bill Geissinger) descends from the sky like a Renaissance deus ex machina to put everything right. Only he takes an airplane from California. And he really does fix almost everything for almost everybody — except Artie and Bananas who remain teetering on the high wire of obscurity. And there&#146;s no safety net.

So, what&#146;s it all about? The Sixties, for one thing, with its obsession with celebrity (pictures of James Dean, Liz Taylor, Marilyn Monroe, Judy Garland and J.F.K. serve as wallpaper in William Bloodgood&#146;s pop art set). And dreams, both waking and sleeping. &#147;When famous people sleep at night, it&#146;s us they dream of,&#148; confides the star-struck Bunny. Artie has a recurrent dream in which his son is the Pope and Bananas dreams that she meets Jackie Kennedy, Lyndon Johnson and Cardinal Spellman in Times Square, offers them a ride and ends up getting beaten up by them.

And it&#146;s about the Viet Nam War, just enough to resonate with audiences who, 37 years later, are facing the possibility of another war in a far-off land.

It&#146;s about obscurity and the longing to be somebody that is the American Dream and, as such, foreshadows a much later play by Guare, Six Degrees of Separation. It&#146;s about some serious stuff, cloaked in slapstick farce. Deftly directed by Barbara Damashek (Quilters), and performed by an excellent cast, it doesn&#146;t stop moving for a moment. It&#146;s only when you step out into the night, after all the zaniness has stopped, that you begin to ponder the meaning. You may get a chill of recognition. The way we were may be the way we still are.