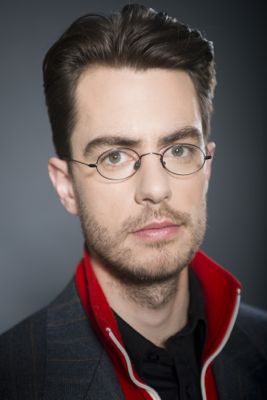 Seth Bockley is a Chicago-based playwright, playwright-in-residence at the Goodman Theatre and author of “Ask Aunt Susan,” which opened at the Goodman’s Owen Theatre this week. He has been involved with the Goodman for several years as part of their playwrights unit, where “Ask Aunt Susan” was developed after Bockley saw the stage possibilities of the Nathanael West novella, “Miss Lonelyhearts.” We interviewed him two days after the new play opened. (See the Gapers Block review of the play.)

“Ask Aunt Susan“ is a satire on our use of technology and the internet. Did you intend it to make us think about our obsessive internet use and perhaps pull back a bit?

The play has that implication. There’s a reason to be suspicious about these internet connections. They can become substitutes for real human connections. The play shows the darker and dangerous side of that addiction, the dark underbelly of the internet.

The play shows two different generations and their use of technology. Aunt Susan is a young man. And Steve and Lydia are two capitalists, who have found a way to make money from the internet. How do you view those generational differences?

The generational difference is not clear-cut. “Ask Aunt Susan“ isn’t just about a young person, a symbol of the generation. The real technology guru is Lydia, the femme fatale businesswoman. The real luddite is Betty, who is very anti-technology.

Now doing business on the web has come of age at the same time as the internet itself. There were two waves. There were the businesses that rose and fell in the ‘90s tech boom. There’s a new tech wave today built on social media and apps.

Steve and Lydia are focused on hard facts of their ROI, how they can make money on their investment. Do you see them as more or less in touch with reality?

They are more in touch with reality and the real world, more so than the young people. There’s something very tactile about Steve and Lydia’s world. The play is about the internet, but each scene is more about the real world. The real world continues to be full of stuff—waffles, omelets and champagne bottles. Stuff in the sensual real world. Beds, diner tables. The merch that Steve is obsessed with.

How would you describe Aunt Susan, the lead character, whose real name we never learn.

The reporter in “Miss Lonelyhearts“ is anonymous too. Aunt Susan is kind of a cipher in a way. He becomes obsessed with his role. His obsessive nature is latent. I feel that we want to watch him go down the rabbit hole. Why does he need this? Why does he go so far?

You’ve worked with Redmoon as a director in the past. How does that kind of visual theater affect your playwriting now?

My training as a maker of visual theater and design-driven theater affected how I wrote this play. I’m always thinking about design as I write. My training as a director too makes me think in three dimensions. It’s also about my own obsession with the tactile physical world. I don’t like theater where people just sit around and talk.

Like many contemporary plays, “Ask Aunt Susan“ is made up of many short scenes, blending one into another. Has that trend come about because of our notorious short attention spans? And how does it relate to traditional theater structure?

The kind of theater I want to do is not rooted in Aristotle’s belief that theater is grounded in place. There’s a long tradition of plays being written in short scenes and moving rapidly. Many of Shakespeare’s plays move from place to place without making literal scene changes. You see that in “Henry V,” with moves from the battleground to a tavern or the royal palace. Hamlet too is written with many scenes, flowing from one place to another.

The idea of moving scenes and suddenly transforming place goes back to commediadell’arte in the 16th century, and other early theatrical forms that move with great velocity. It’s part of the magic trick of theater.

“Ask Aunt Susan“ runs until June 22 at the Owen Theatre of Goodman Theatre, 170 N. Dearborn St. Performances are at varying times Tuesday through Sunday. Tickets are $10-40 and can be purchased online or by calling 312-443-3800. For more information, see the theater website.

This review was previously published on gapersblock.com/ac/