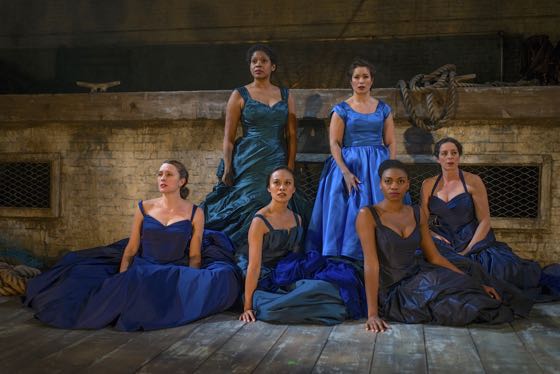 By Euripides, translated by Nicholas Rudall

On a barren and worn wharf in Aulis, the Greek fleet waits to depart for battle in Troy. You may remember the story. Agamemnon is king of Mycenae. His brother Menelaus was married to the beautiful Helen, who was kidnapped and whisked off to Troy to marry Paris. Now the Greek fleet, commanded by Agamemnon, is ready to set sail for Troy to right the wrong and bring back Helen.

But there’s no wind to power the sailing ships and the goddess Artemis (the gods always get involved in these tales) demands that Agamemnon sacrifice his daughter Iphigenia to get those winds blowing.

Court Theatre portrays this story in a low-key, minimalist 90-minute telling, directed by Charles Newell. The translation by Nicholas Rudall is clear and straightforward, sometimes poetic. The language is enhanced by the perfect vocal cadences of all the actors and chorus members.

Agamemnon (Mark L. Montgomery) is a man torn between his leadership responsibility and his grief about his daughter. He lures his wife Clytemnestra (forcefully played by Sandra Marquez) and daughter (Stephanie Andrea Barron) to Aulis on the ruse that he has arranged for Iphigenia to marry the renowned warrior Achilles. (Achilles was of mixed parentage; his mother was a nymph and his father a king. He would later play an important role in the Trojan War.) Achilles (Jordan Brown) meets Clytemnestra and vows to protect Iphigenia.

Agamemnon frets about his duty and consults with his attendant, an old man played with sorrow and dignity by Christopher Donahue. Finally Agamemnon says to the old man, “Brother, I have no choice. There will be blood.” Agamemnon refers to the war as necessary for “Greeks to be free … from the barbarians.” Iphigenia learns about her fate and Barron, as Iphigenia, suddenly changes from a giddy teenager into a brave and eloquent woman. She says she knows she must die for Greece. “My headstone will be the altar of Artemis.”

The production boasts some excellent performances, especially by the two female leads and the six chorus members. Marquez as Clytemnestra is a fierce, loving mother who respects her husband Agamemnon but protests his need to sacrifice their daughter, all because of “that whore, Helen.” (In mythology, Helen is Clytemnestra’s sister by another father. Both are daughters of Leda, who was seduced by Zeus in the form of a swan, Helen’s father.) Barron as Iphigenia is quite believable, even though her transformation into martyr happens rather quickly.

The six chorus members lend a dramatic spirit to the tragedy, despite their costumes. They’re dressed incongruously in silky/satin gowns in shades of blue with layers of crinolines, making their movement reminiscent of the ‘50s. The chorus members are Kasey Alfonso, Jeanne T. Arrigo, Emjoy Gavino, Tania Richard, Adrienne Walker and Tracy Walsh. Richard has a particularly strong vocal presence.

Montgomery’s low-key performance as Agamemnon may be what keeps this production from having more fire. He is too much the brooding executive, too little the impassioned warrior.

Coils of ropes are a key element in Scott Davis’ scenic design, suggesting a relationship to death. In the final scene, the ropes are drawn taut. The winds have risen and the fleet is setting sail for Troy. Agamemnon’s hands are bloody.

Court’s productions of “An Iliad” by Denis O’Hare and Lisa Peterson were hugely successful for the theater in its 2011 and 2013 stagings. “An Iliad” was a miraculously poetic and gripping production, in which the long history of wars almost made sense of the modern era. Timothy Edward Kane was brilliant as The Poet, who breathes life into the long story. His chilling recitation of wars was a dramatic highlight.

There’s no such drama in the current production. But the success of “An Iliad” led to Newell’s decision to stage a three-year cycle of classic Greek texts that tell the mythological story of the House of Atreus. Euripides’ “Iphigenia in Aulis” is the first; it will be followed by Aeschylus’ “Agamemnon” and Sophocles’ “Electra.” Rudall, Court’s founding artistic director, is translating all three.

“Iphigenia in Aulis” ran through Dec. 7 at Court Theatre, 5535 S. Ellis, on the University of Chicago campus. Court is a professional Equity theater.

This review previously appeared at gapersblock.com/ac/.