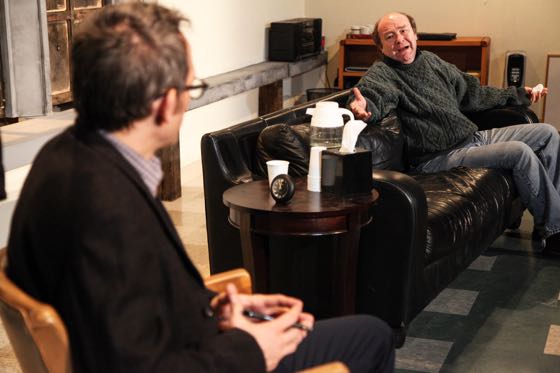 The scene is a dingy therapist’s office in Dublin. Ian (Coburn Goss), a former priest, is preparing his new office for his first client. Over the course of the 100-minute, five-scene, production, the office is the scene of poignant therapy sessions with John (Brad Armacost) and Ian’s interactions with his fiancée Neasa (Carolyn Kruse) and with Laurence (Shane Kenyon), a young man who he meets in the park. Conor McPherson’s “Shining City” is beautifully and subtly written and may remind you of the ghosts of your own haunted past.

Irish Theatre’s director Jeff Christian does a credible job directing this script, which is a series of conversations, sometimes quiet, sometimes emotional. Nothing much happens. Everyone is lonely and needy. As the play opens, John comes to Ian for help with his guilt over the death of his wife, Mari, in a taxi accident and her continued haunting presence in his house. The high point of the play is Armacost’s long monologue in scene 3, in which he bares his heart, soul and the traumatic last days before his wife is killed. We learn that he feels guilty because of an episode of infidelity; he tells how he bought Mari an expensive red coat to assuage his guilt. The monologue goes on for at least 20 minutes. Armacost’s performance is nuanced and moving and worth the price of sitting through the rest of the play, which sometimes drags. Goss has a difficult role to play throughout this scene. As the therapist, he can only nod occasionally and look sympathetic.

In the final scene, everyone is moving on. Ian is packing up his office to move to Limerick to be with his fiancé and child. John has moved house, is now dressed more spiffily and has a girlfriend. But the scene is still haunted.

Armacost is a veteran of Irish Theatre productions as well as many other major Chicago productions. His experience and talent are crucial to this production. Kruse and Kenyon both handle their single scenes well. Kruse as Neasa tries to understand why Ian is leaving her and their baby, while Kenyon as Laurence portrays a troubled young man with his own child and no home or work.

Transitions between scenes are handled with minimal fuss, as McPherson suggests in his stage directions. With dimmed light, Ian moves a chair, adds a prop or two, and adds or removes an item of clothing. The costuming by Allison Amidei and set design by Ira Amyx and John Peplinski are very efficient. Julian Pike’s lighting design suggests changes in time of day. Original music by Matt Kahler and Jeff Christian bridges the scenes effectively.

McPherson’s 2006 play is described as an Irish ghost story. It’s a quiet play and probably not as viscerally memorable as “The Seafarer”, which the Irish Theatre (then known as Seanachai Theatre Company) produced a year ago to great acclaim. That was also a ghost story, in which Richard (played by Armacost) plays cards with the mysterious Mr. Lockhart, who assuredly is the devil. McPherson also wrote “The Night Alive”, which won many New York awards this year and had a fine Steppenwolf production in November. His other plays include “The Weir,”, “Dublin Carol,” Port Authority and “This Lime Tree Bower”, all of which have had recent Chicago productions.