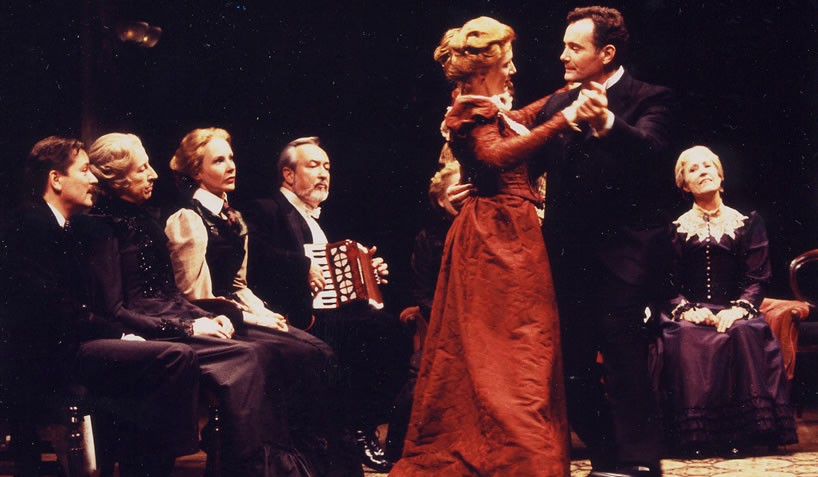 James Joyce had a theory of "epiphanies" which posited that seemingly insignificant incidents can be the source of profound insights. The Dead, his short story first published in 1914, is his theory proven. In its brief length, a handful of characters are introduced, ordinary sorts of people celebrating Christmas an at annual party given by the sisters Morkan–Julia, who sings in the church choir, and Kate, a music teacher. Their guests include a favorite nephew, Gabriel Conroy, and his wife Gretta; a drunk, Freddy Malins, and his aging mother; Molly Ivors, an Irish nationalist; and Bartell D’Arcy, a young tenor from the opera company at the Theatre Royal.

They talk, they flirt, they drink, they dine, they sing and dance, and then they part. Joyce deftly sketches, in these few pages, an ensemble of individuals and a collection of small, telling incidents that reveal character and cumulatively create a mood of gentle melancholy. There’s a hint of politics, there’s Aunt Julia being forcibly retired from the church choir, and there’s Gretta’s memory of a youthful love coming between her and her adoring husband. The economy with which Joyce creates this microcosm and the fluidity and of his spare prose that speaks to mortality and immortality must be as near perfect as anything in the language.

So it is an audacious undertaking to adapt a story such as this, a small masterpiece, for the stage or screen. John Huston’s 1987 film version, the last film by the distinguished director, is widely admired and garnered its share of awards, though not an Academy Award–not enough glitter for the Hollywood dream factory.

Richard Nelson (book) and Shaun Davey (music) adapted The Dead as a musical stage piece which ran off-Broadway and later moved on Broadway for a short run last year. Nelson has remounted the show for American Conservatory Theater. The overall result here is disappointing, though not without its rewarding moments.

Since the story is placed in the midst of a celebration that includes both group singing and performances by the hosts and guests, their method makes sense–seeking to tell the story mostly through the songs. Using Gabriel as a narrator (thus providing a vehicle for the direct use of some of Joyce’s descriptive words), and with a minimum of dialogue, the music dominates. The lyrics are a combination of adaptations of Irish poems and original material and the music is inspired by traditional Irish songs. So there’s a gentle air nostalgically evoking love for the country, a rollicking drinking song, a defiant Irish nationalist political song, a novelty number, an operatic aria for D’Arcy, a rousing chorus or two–fourteen songs in all.

But if the songs are to make the show work, the voices that deliver them are of central importance, and the voices on stage at ACT are a very mixed bag indeed. Backed up by various combinations of violin, piano, flute, and accordion, there were effective moments from Gabriel (well played by Sean Cullen), a light and sweet tenor, from Gretta (a strong performance by Kate Kearney-Patch), and from Aunt Julia (Alice Cannon) and Aunt Kate (Patricia Kilgarriff). On the other hand, the rousing "Parnell’s Plight" is led by Molly Ivors whose voice was forced, harsh, disquietingly unpleasant in tone. And the operatic tenor aria, even if, according to the tale, rendered by a singer with a cold, was totally beyond the capability of Gannon McHale who bleated and shouted more than he sang.

When the voices don’t work in a musical mood piece such as this, the spell–if one had been spun–breaks as surely as the ice in the metaphor which Nelson rather obviously latches on to, not once but twice. And the other voices, while not unpleasant, seemed to come more from actors singing; a more effective choice would have been fine singers acting. In the Joyce story when Julia sings ("her voice strong and clear in tone"), Gabriel/Joyce notes: "To follow the voice…was to feel and share the excitement of swift and secure flight." In this house of Irish musicians at ACT, there was no such pleasure.

The production is by the same designers who did the Broadway show. The costumes are attractive and appropriate but the sets seem budget-oriented–a few pieces of furniture against very plain architectural elements, hardly evoking the fussier middle-class Irish interior that would be more typical of the period. Even that would not have mattered had the singing been fine.

(6818)
$9.89 (as of January 27, 2021 - More infoProduct prices and availability are accurate as of the date/time indicated and are subject to change. Any price and availability information displayed on [relevant Amazon Site(s), as applicable] at the time of purchase will apply to the purchase of this product.)

(11076)
$4.79 (as of January 27, 2021 - More infoProduct prices and availability are accurate as of the date/time indicated and are subject to change. Any price and availability information displayed on [relevant Amazon Site(s), as applicable] at the time of purchase will apply to the purchase of this product.)

(17951)
$10.57 (as of January 27, 2021 - More infoProduct prices and availability are accurate as of the date/time indicated and are subject to change. Any price and availability information displayed on [relevant Amazon Site(s), as applicable] at the time of purchase will apply to the purchase of this product.)
related posts