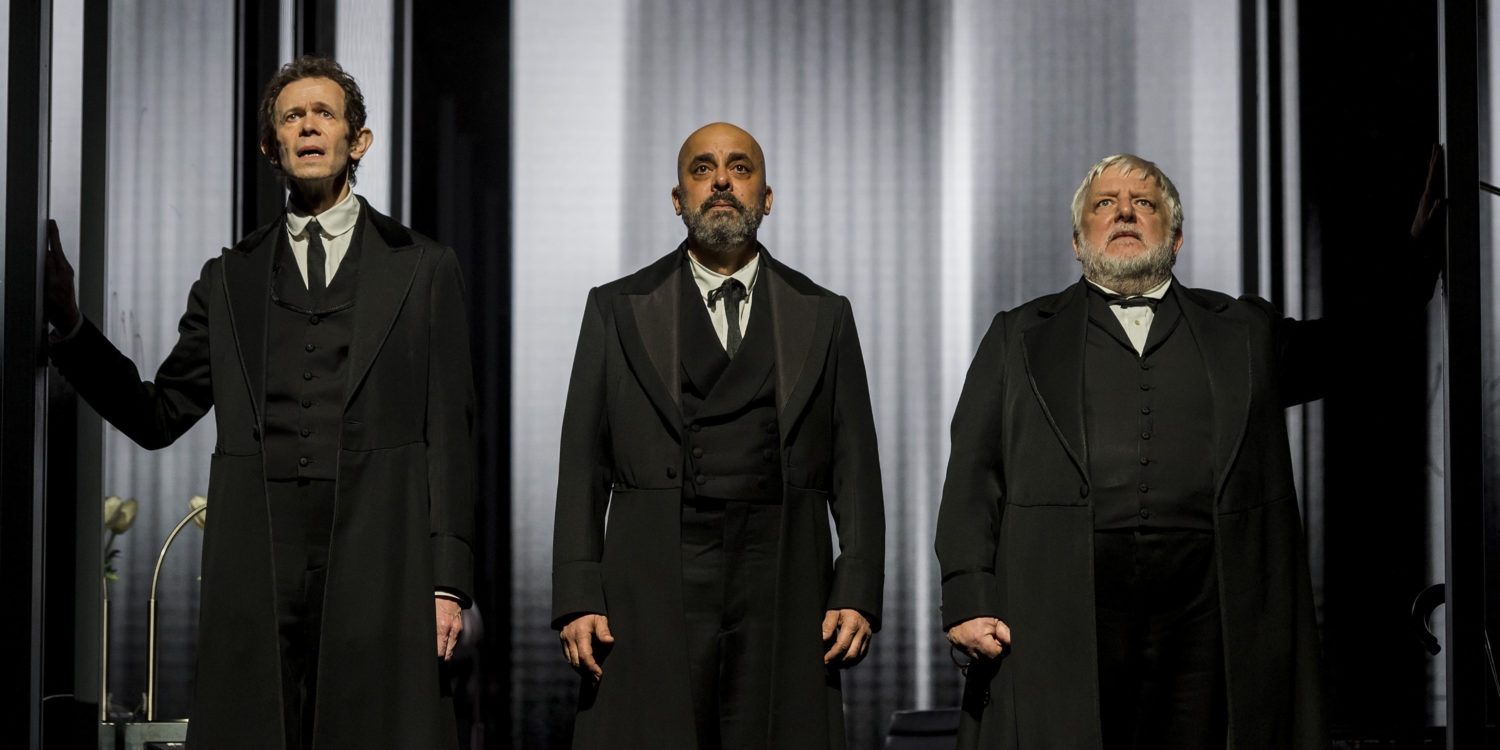 A National Theatre Production at the Ahmanson Theatre, Los Angeles

A whirlwind has been let loose on the Ahmanson stage. The National Theatre production of “Lehman Trilogy” has arrived. You remember that day in 2008 when the earth shook as Lehman Brothers collapsed on Wall Street? 164 years of the Lehmans in America preceded it. Ben Power has collapsed Stefano Massini’s poetic Italian novel about the Lehman saga into three acts (3 hours and 30 minutes with 2 intermissions) of mostly breathless theater. I know, three hours and thirty minutes, do I really want to sit through all that? Yes you do; it is not perfect, little in this world is, but it contains some of the best acting, some of the best direction, and one of the most versatile stage sets I have seen. Three actors cycle through multiple parts from seasick Henry Lehman’s 1844 arrival in America, to the other two original brothers, screaming babies, flirtatious marriage prospects, and ultimately a Yalie playboy who twists and shouts into his dotage. I must have omitted at least a dozen other characters and over a century.

Es Devlin’s set is a stark, post bauhaus, glass cube office piled with cardboard file boxes and a modern New York skyline projected behind. With only the projected background scene changing as the story goes through the years it becomes all that is necessary to carry the story through time. Henry Lehman (Simon Russell Beale), a German Jewish immigrant comes ashore after forty some odd days at sea, wobbly legged and in a long black frock coat, a versatile garment that serves the actors well through the ages. His name has been changed at Ellis island; whose wasn’t? Never mind. He finds his way to Montgomery Alabama and follows the path of many immigrants before and after — Jewish, Italian, Greek, Chinese, you name it — he opens a tiny shop. It occupies a small corner of the glass box and a space in your mind’s eye. Montgomery is the center of cotton and the culture of slavery. His two brothers, Emanuel Lehman (Howard W. Overshown) and Mayer (Adam Godley)– names americanized courtesy of the immigration folks — arrive several years later. The chatter is funny, heavily sprinkled with yiddish and the religious customs of the old country. The action is non-stop. The shop grows as they move the boxes around the small space. Black frock coats morph from Immigrant attire, to ladies’ dresses, to formal wear, The brothers seize opportunity, umoved by the slavery that has been the backbone of the south.

From the shop the Lehmans become wholesalers and transporters of cotton spreading their activities to New York. A crisis in the world at large shakes them up for a moment and they turn it into opportunity. Lemons become lemonade. Wives are taken. Babies soon after. Babies cry (courtesy of bearded Simon Beale); Civil War breaks out, but they are always focused on expansion and making money. Time passes. 1929 presents its own challenges. Opportunity is there if just you look. Yes there are crises but those too are weathered as long as there are Lehmans directing the action. It is constant motion, only slowing when it is necessary to stop and sit shiva. In the early years shiva is practiced as a ten day period of mourning the death of a family member and literally sitting, suit jacket arms torn in the ritual way. By the time the last of the Lehman dies no jacket sleeve is rended. There is work to be done but baby boomer Yalie, Bobbie Lehman (Adam Godley), the last of the Lehmans, does the twist until he physically melts into the pile of boxes.

Though the name of the organization morphs many times to reflect the change in business direction, it remains Lehman for the last 39 years despite the fact no Lehman remains. Ultimately Lehman Bros. is creatively managed by the Quants in charge to becoming the touchstone for the crash of 2008.

Over three hours is hard to sustain. The end of the Lehmans themselves, Godley dancing like Gumby until he twists to the ground, is worth Act III, but the galloping demise of the organization lacks some of the magic and allure of the first two acts. The story has to be told, but quants are a data driven group, not the best dramatic material and not so easily inserted into the colorful story of the family. We all know the abrupt 2008 end of the tale and the economic tsunami it set in motion. Perhaps that is a story that would lend itself better to its own dramatic portrayal.

The pace is breathtaking. Original cast members Beale and Godley are well matched by Overshown. They fly through multiple roles tirelessly.There is little trouble keeping characters separate. It appears they are casually speeding around the stage in what must be carefully choreographed action but appears tossed off. Boxes are rearranged, mounted, moved again. Lehman trilogy is a triumph of storytelling. Mostly the fourth wall is broken to marvelous effect. Forget what I said about Act III. Go. You won’t regret it.