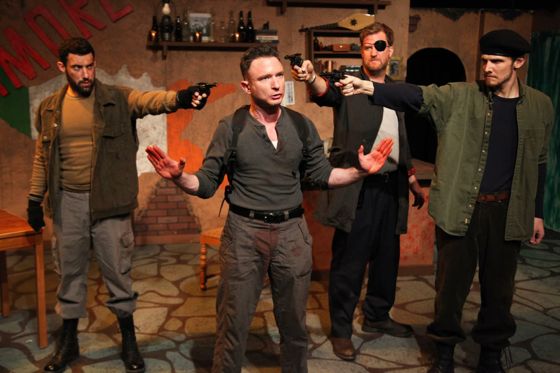 “Four dead fellas, two dead cats … me hairstyle ruined! Did I miss anything?”

That’s the culmination of Martin McDonagh’s grisly black comedy, “The Lieutenant of Inishmore”, now being crisply staged by Aston Rep at the Raven Theatre.

The trauma begins when pony-tailed Davey (Matthew Harris) finds a dead black cat in the road. The cat, Wee Thomas, is the beloved pet of Padraic (John Wehrman), a soldier with the Irish National Liberation Army (INLA) in Northern Ireland. (He’s known as Mad Padraic because he’s so volatile the IRA wouldn’t take him. That’s why he fights with the more radical INLA.) Davey and Padraic’s father, Donny (Scott Olson) consult about how to tell Padraic that his cat is poorly and “just a tadeen off his feed,” so that Padraic won’t rush home, find Wee Thomas with his brains squeezed out, and avenge his death. Donny instructs Davey to find another black cat to replace Wee Thomas.

The 90-minute production, set on the island of Inishmore in Galway, plays out in nine scenes. The time is 1993, when the Irish peace process was in very early stages. (The Good Friday Agreement, which ended the almost 30 years of civil war known as the Troubles, was not finalized until 1998.)

We meet Padraic in scene 2. He has James (Scott Wolf) strung upside down by his heels. Padraic has just finished slicing off James’ toenails and is contemplating performing the same surgery on James’ nipples. James’ crime is selling marijuana to high school students “at fair rates” but Padraic objects. (Wolf does a good job of managing dialogue while upside down, including pointing out that Paul McCartney says marijuana “should be outright legalized. He says it’s less bad than booze and it cures epileptics!”)

The torture is interrupted by a phone call from Donny. The two exchange pleasantries, like “How is it all on Inishmore, Dad?” and Padraic reports that “I haven’t been up to much lately. I put bombs in a couple of chip shops, but they didn’t go off…. The fella who makes our bombs, he’s fecking useless…. One thing about the IRA anyways, as much as I hate the bastards, they know how to make a decent bomb.” After hearing about Wee Thomas’ illness, Padraic says “I’ll be home the first fecking boat in the fecking morning.”

The next day, Mairead (Nora Lise Ulrey), Davey’s 16-year-old radical sister, attacks Davey and his bicycle. She’s sympathetic to the INLA, loves Padraic, wears army trousers and carries an air rifle, which she uses with energy on Davey and his bike. Their conversation turns to cats, including her own cat, Sir Roger. Meanwhile, Davey can find only a ginger cat and he and Donny cover the cat with black shoe polish.

Padraic arrives to find the shoe-polished ginger cat. He threatens to kill both Davey and Donny. He hacks off Davey’s ponytail with a bowie knife.

Four Northern Irish opponents of Padraic’s splinter group arrive in Inishmore to carry out Padraic’s demise. Their leader, Christy (Robert Tobin), wears a black eye patch because Padraic shot his eye out. Murder and body butchery ensue, with Mairead a leader in the killings.

“It’s incidents like this does put tourists off Ireland,” Donny observes.

In the final scene, as Donny and Davey hack apart the bloody bodies, a black cat scrambles through a hole high in the wall. It’s Wee Thomas (Widget), home from his gallivanting and hungry for some Frosties.

Director Derek Bertelsen does an excellent job moving us through these nine scenes and choreographing the blood, dead cats and human body parts. The Celtic punk rock music arranged by sound designer Ray Kasper creates just the right atmosphere. Kendra Kargenian has done a good job with dialect coaching, although I confess, I may not be able to judge the difference between Galway and Northern Irish accents.

Martin McDonagh is one of the much-praised contemporary Irish playwrights. I admire the note of mad black comedy in all his works, such as “Pillowman”, “Beauty Queen of Leenane” and “Lonesome West” (an Irish take on Sam Shepard’s “True West”) on stage and “In Bruges” and “Seven Psychopaths” on screen.

You can see “The Lieutenant of Inishmore” by Aston Rep at the Raven Theatre, 6157 N. Clark. Tickets are a bargain at $20 with some discounts available. Performances are Thursday, Friday and Saturday at 8pm and Sunday at 3:30pm through Nov. 23. Buy tickets online or by calling 773-828-9129.

Photo by Emily Schwartz.
This article was previously posted on gapersblock.com/ac/