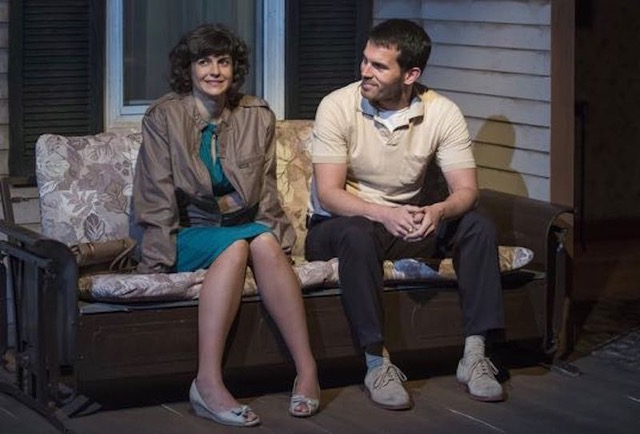 Josephine is the nice girl. She’s so nice that she remains living at home with her mother, working in a dead-end job, when she really wants to do what she wants to do. One problem is that she doesn’t know what that is.

“Nice Girl” by Melissa Ross is the new production at Raven Theatre. Lauren Shouse sympathetically directs this heartfelt and down-to-earth story of four people whose lives didn’t turn out as they hoped. Life’s bleakness is the underlying theme of “Nice Girl,” set in a middle-class Boston suburb in fall 1984.

At a time when so many theater productions (and films and TV) are focused on political and social trauma, it’s fulfilling to watch two hours of theater that tell the stories of ordinary people. “Nice Girl” is beautifully written, sometimes humorous, sometimes wrenchingly poignant. Its dialogue is spot-on natural. I imagine any woman in the audience, for instance, was taken back, as I was, to arguments with my own mother, who constantly annoyed me even though I loved her dearly.

The main story belongs to Josephine (Lucy Carapetyan), a middle-aged woman who has lived at home all but eight months of her life. Twenty years ago, she spent eight months going to Radcliffe College on a scholarship, a sign that someone was ready to invest in her future. But her father’s illness meant she had to quit school and she lost her scholarship. Since then, she has lived at home with her hypochondriac mother, working in a clerical job for an insurance firm. Her mother (Lynne Baker) yearns for her daughter to meet the right man, get married and have grandchildren. (Mom was almost in the Rockettes—she had a 19-inch waist! but got married instead.) And Josephine yearns to go somewhere—Paris, perhaps, or Milwaukee or Phoenix.

Jo’s work friend, Sherry (Stella Martin), is a more worldly woman. She befriends Jo and encourages her to dress up, make up and hit the singles bars with her. Sherry has a child and a boyfriend who she just learned is “kinda married.”

Donny (Benjamin Sprunger), an old high school friend, works in his uncle’s grocery store and he flirts with Jo over her purchase of veal chops or ground beef. They decide to attend the coming high school class reunion and Donny invites Josephine to go with him. It’s sort of a date. Sherry helps her shop for a new dress and does her hair and makeup on the big night.

A conversation between Jo and Donny late in the play sums up the story. Donny is disappointed in his life too. “I married the girl I was supposed to marry. Be a butcher cuz my father was a butcher. I did all the things I was supposed to do…. And I’m not sure I’m too happy.” And Jo adds, “You know what I think? I think nobody’s happy. It’s a joke. From God. Being happy doesn’t exist.” Despite that exchange, there’s a ray of hope at the end.

The somewhat downscale Boston middle class environment is richly realized through Shouse’s direction and the fine performances of the four actors. Lauren Nigri’s perfect scenic design, primarily showing Josephine’s home—living room, kitchen and front porch—is skillfully changed from scene to scene by Becca Jeffords’ lighting. Props and set dressing by John Buranosky maintain the perfect tone too—including the can of Tab that Jo drinks as she sits in the workplace breakroom with Sherry. Eric Backus’ original music and sound design blend in period music to complete the sonic setting. Costume design is by Noel Huntzinger.

The four actors carry off the middle class Boston accents almost perfectly, thanks to the work of dialect coach Jason K. Martin.

Playwright Melissa Ross is also the author of “Thinner Than Water,” produced here in 2014 by the Gift Theatre, plus “You Are Here,” “Do Something Pretty,” “Good Stock” and other plays. She’s a member of the :New American Writers Group at Primary Stages and Labyrinth Theater Company.

This review was previously published at thirdcoastreview.com.