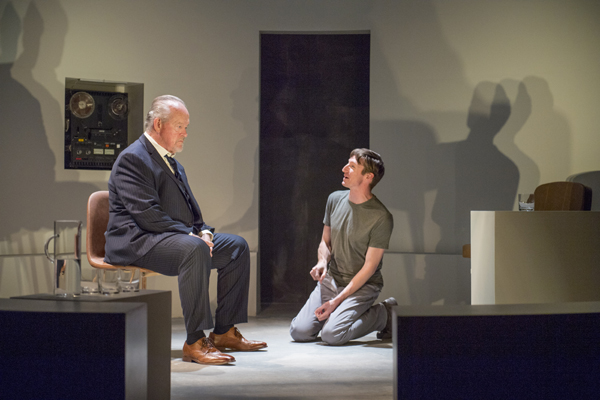 The successful birth of Dolly the sheep, the first cloned mammal, was a startling event in 1996. Now the news of Barbra Streisand’s cloned puppies has shown how replicating pets genetically is easily available to the privileged at their whim and for no discernible scientific benefit. But dogs and sheep are nothing compared to the multiple cloned sons in Caryl Churchill’s fascinatingly chilling one-act, one-hour production of “A Number” at Harry’s Upstage at the Aurora Theatre in Berkeley, California. First premiered in London in 2002, “A Number” is even more relevant today as ethical debates escalate about human cloning, stem cell research and the use of genetic material from more than two parents to create a healthy child.

In the start of this intense drama, 35-year old Bernard (Joseph Patrick O’Malley, Chicago’s Steppenwolf Theatre and Galway’s Druid Theatre Company) has just discovered that he has a number of cloned brothers and demands answers from his prevaricating father, Salter (Paul Vincent O’Connor, “American Buffalo,” “Death Defying Acts”). Bernard had always been told that his mother died at his birth, but Salter is eventually forced to reveal all the falsehoods he’s told his son, including that Bernard’s mother actually died two years before Bernard was born, and, that he has an identical, but five-years older and psychologically damaged brother, likely from his father’s neglect. Unbeknownst to Salter, the doctors had made multiple copies of Bernard. Eventually we meet three Bernards, each of whom has a distinctly unique personality and a singular reaction to the news of their brethren.

The two-person cast of Joseph Patrick O’Malley and Paul Vincent O’Connor have mastered their multi-faceted characters, leaving the audience feeling vaguely sympathetic to the remorseful Salter despite his selfishness, and feeling sad for Bernard who thought that he was the only apple of his father’s eye. Well-respected director Barbara Damashek (“Splendour,” “American Buffalo,” “The Lyons,” “Fat Pig”) works wonders with the intensity of Churchill’s stammering dialogue, in which the characters interrupt each other and speak in incomplete sentences.

English dramatist Caryl Churchill (“Top Girls,” “Fen,” “Serious Money”) and esteemed author of almost 50 plays, explores a number (pun intended) of vital issues in this complex piece: Has science out-paced morality and ethics? What makes one an individual? How should one accept the concept of being one of a group of identical siblings? Are you not who you thought you were because you are one of many copies? How important is nature versus nurture? What are the real components of a parent-child relationship?

Only a playwright as fine as Caryl Churchill could tackle these issues intellectually and viscerally in a one-hour production. And although the abrupt ending of the play left me somewhat unfulfilled, “A Number” is an extremely intelligent, thoughtful and stimulating drama.

This review first appeared on Berkeleyside.com