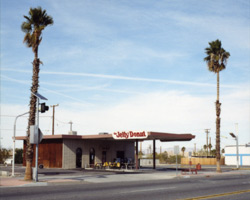 Pig Iron Theatre serves up plenty of sagebrush philosophy at the diner in ‘Welcome to Yuba City’ located somewhere between Roswell and that last chance Texaco in your mind.    Yuba’s  witty cutaway set by Mimi Lein lets a rusted Ford pickup bust through the diner diorama as desert vistas loom down the road apiece, where the odd alien may be dancing amok.

Those aliens are outshined in strangeness by some of the denizens of  the regular lunch crowd though.   Them dudes and dudettes tumbling into the diner in skinny jeans and Stetsons  for some apple pie or the odd plate of fettuccini Alfredo.  Geoff Sobelle is the telepathic chieftain who knits blankets out of tumbleweed, he doubles as the mumble mouth cowboy whose meandering epigrams leave you stranded in paradox.

Later, Sobelle is the hilariously pissed off and doddering senior who lets people help him at their own peril. him.  James Sugg’s meek pigeon-toed, cross eyed historian tells how Yuba was settled and by a man who ran out of gas and communed with the lizards, later he does a Yuba anthem on the diner’s karaoke machine.

Charlotte Ford is the furiously obsessed wife Susan in such bad animal print clothes that her mullet doesn’t even give pause.  She keeps her diabetic husband Tom, played with glorious spasticity by Dito van Riegerberg, at his 7ft restraining order distance with her expandable  ruler.

Hinako Arao’s the waitress is too, too happy to oblige the customers with instant orders, when she isn‘t in a silver afro burying gold bricks behind the counter.  Sobelle, van Reigersberg and Alex Torra are three stoogey Italian cyclists who love everything Americana but are always a word away from Italiano bickering and passionate makeup kisses.  Torra is also the lisping alien tracker with aluminum foil equipment, who is being tracked himself the gmen in black.

There is madcap, slapstick fun in Yuba and Director Quinn Bauriedel keeps things moving even though some of the comedy skids off course.  Deborah Stein script brings huge laughs and has great character comedy in it, but gets a little windblown with its literal ending.

But Bauriedel knows how to orchestrate fine ensemble playing and inspired physical comedy, love that forward and reverse slo-mo western mayhem ala The Wild Bunch (credit choreographer Christina Zani).   Bauriedel misses the opportunity for some great singing from Sugg and van Reigersberg, who get abbreviated songs, meanwhile the martini and lounge lizard soundtrack is mighty fine in Yuba City.