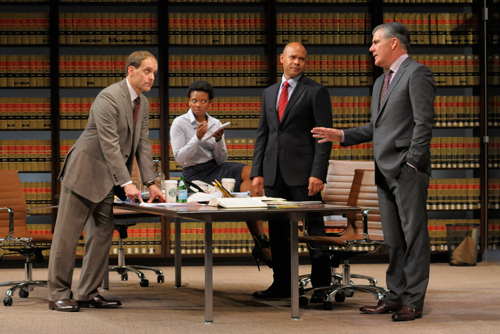 In the justice system the race is not always to the swift. Sometimes it’s to the sneaky or the one who elicits the most sympathy or the guy puts on the best show. This is only one permutation of the word that serves as the title of David Mamet’s latest play. Another is, of course, ethnic origin and prejudice and not only on the part of white folks. It turns out that African-Americans have their biases, too — lots of them. Mamet, the potty-mouthed whiz kid from Chicago who became one of our leading playwrights with masterpieces like “American Buffalo,” “Glengarry Glen Ross” and “Speed the Plow,” takes on race, prejudice, shame and the law this time (somewhat as he did in his earlier “Oleanna”) and the jury is still out on the results.

The excellent American Conservatory Theater cast of this 90-minute drama is, I think, hampered by a script that is laden with long-winded legal erudition in place of the usual Mamet half-sentences and snappy one-liners. Anthony Fusco as Jack, the white half of a mixed-race law firm, especially has to struggle with long mouthfuls of words in the first third of the show. He does it manfully but the difficulty shows and you can’t help thinking that people don’t really talk like that. His African-American partner, Henry Brown, played by Chris Butler, fares somewhat better with his speeches (i.e.: he pontificates less and tells it how it is) and, perhaps as a result, turns in the best, most realistic performance of the bunch. Did Mamet plan the dialogue that way? Who knows but it does not seem to be in the best interests of the play.

A third member of the legal team is the Fusco character’s protégée. Susan, a young, beautiful, super-bright African-American lawyer, played by a cool Susan Heyward, may have been hired because it was too dangerous not to give her the job but she will serve up her own dish of danger before the curtain comes down. The cast is rounded out by Kevin O’Rourke as Charles Strickland, a wealthy, powerful son of privilege who is the accused in a case that the firm of Lawson and Brown may or may not take. No one has said no to Strickland in 40 years but these guys just might. But then again there is a colossal fee. And a controversial red sequined dress. “The law is not an exercise in metaphysics,” Jack tells Susan. “It’s an alley fight.” And Jack likes a good fight.

In an eerie echo of the recent Strauss-Kahn brouhaha, Strickland faces trial for the alleged rape of an African-American woman in a hotel room. He maintains that they were long-time lovers. The male lawyers wonder whether or not she actually was a hooker. Susan is concerned with the black/white dichotomy as well as feminist issues and Strickland, overcome with fear and guilt but protesting that he is the victim, wants to take his case to the press. It’s a tangled web and the way it unravels is the plot of the show.

Played on Chris Barreca’s stunning law-office set — one solid wall of books, another of reflecting glass doors with spare, sleek modern furnishings in between, and deftly directed by Irene Lewis, “Race,” as you can imagine, raises many more questions than it answers. In dealing with Strickland’s shame, and Susan’s, we may be forced to confront our own. It’s not a comfortable play. Neither is it one of Mamet’s great ones.