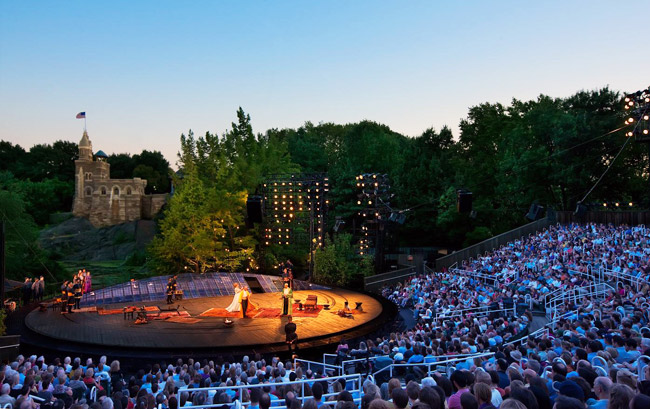 “Like one swallow,” wrote John Simon when reviewing the premiere of “The Mystery of Edwin Drood,” “one Shakespeare does not make a summer.” Fortunately, for the first time since 2011, Shakespeare in the Park is eschewing musicals for two revivals from the Bard. This year, they are presenting “Much Ado About Nothing” (June 3 – July 6) and “King Lear” (July 22 – August 17). Here, I have tried to cover everything you need to know in order to get in.

Tickets are free. Thank Bank of America and Bloomberg.

The line for tickets starts at 81st and Central Park West. After the Park opens, the line moves to the Delacorte Theater. Someone from the Public Theater will come out and lead you there, but you should probably set an alarm for 5:45.

If you think you’re getting in line too early, show up an hour earlier. The line for Shakespeare in the Park varies from production to production: four years ago I arrived at 4am to queue for The Merchant of Venice starring Al Pacino. I didn’t get tickets, but a voucher for return seats. I did get into the show, but only after returning to the Delacorte at 5pm to stand in line again. Last year, I arrived at 1am for The Comedy of Errors—perhaps overcorrecting my mistake, since I was fourth in line and nobody else showed up until around 6am. Still, I was second row center and, in some ways, it’s easier to camp out overnight with friends than to wake up and take the train uptown at sunrise.

The line will also vary depending on when you go. Weekends are tougher as are the days after opening night (especially if the reviews are good). Generally, it’s better to go earlier in the season.

There are bathrooms. The Park doesn’t open until 6am, but until then there are enough nearby bushes and trees.

Bring blankets. Bring several. If it gets cold and you only have one, you might be sleeping on the pavement on 81st and Central Park West. Like me.

Bring entertainment. Books, iPads, iPods, board games, playing cards, etc. Better to have too much than not enough.

Bring food. You’re going to be there for quite a while. So bring more than snacks, bring meals.

Tickets are distributed at noon, unlike in previous years, when they were distributed at 1pm. Senior citizens (who have a separate line) get theirs first. Each person can request either one or two tickets.

If you show up late and are standing by a very big rock, go home. That rock is called The Rock of No Hope.

One certain days, tickets will be distributed at locations throughout the five boroughs. These tickets, however, are limited, and unless you live in Staten Island I would recommend making your way to the Park if possible.

You can also enter the digital lottery, but this works best if you live in New York and can enter multiple times. The chances of getting tickets on your first try are slim.

Outside food and drink (including alcohol) are allowed inside the theater, but no glass containers.

Children under five do not need their own tickets and can sit in the laps of their parents or guardians. Strollers are not allowed inside the Delacorte.