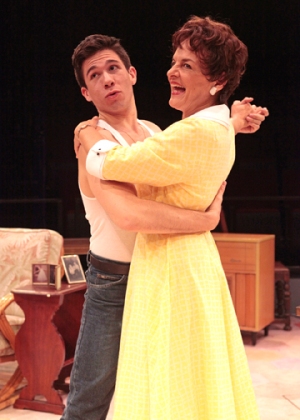 Let’s not beat around the bush: If you are wondering what theatre-at-its-best looks and feels like, get a ticket to see Matthew Lopez’s new play “Somewhere.” In this new, amusing and touching work, the Old Globe playwright-in-residence scrutinizes a family living in New York City. It is 1959 and the happy Candelarias struggle to realize their dreams. Obstacles, other than financial ones that only son Alejandro seems to worry about, include an absent father away in California to find work and an imminent eviction to make room for the Lincoln Center construction crew.

But all this is not enough to tame the family’s passion for theatre. The matriarch works as an usher for the smash-hit musical “West Side Story,” while son Francisco rehearses for his acting class. His 16-year-old sister, Rebecca, fantasizes about being a Broadway or movie star. Even brother Alejandro discretely keeps in touch with the thespian art through his writing—but in this family of idealists, he is the one who keeps in touch with reality with a steady job at the local grocery store. Will visiting childhood friend Jamie MacRae, who is living the dream in the “West Side Story” production, tip Alejandro’s balance in favor of the arts? You’ll have to go see the show to find out…

Matthew Lopez (“The Whipping Man”) drew from his own family history to craft his new play. His father and siblings are said to have worked as extras in the prologue of the movie version of “West Side Story,” incidentally filmed where Lincoln Center now stands. (Conveniently, the site was cleared of residents and the demolition was held until shooting was completed. There is another family bit in the fact that the playwright’s very own aunt, Broadway veteran Priscilla Lopez (“In the Heights,” “A Day in Hollywood/A Night in the Ukraine”), brilliantly stars as Inez Candelaria in the Old Globe production. The actress electrifies the stage with boundless energy and passion. In the category of grand performances, I should also site Jon Rua (“Bring It On: The Musical,” “In the Heights”), who brings the complex character of Alejandro to life. Juan Javier Cardenas is a one-of-a-kind Francisco and sister Rebecca is wonderfully interpreted by Benita Robledo. To complete the outpouring of talent on the intimate Old Globe stage, Leo Ash Evens is “West Side Story” dancer Jamie MacRae. Throughout the show, the chemistry between actors is phenomenal.

Giovanna Sardelli, who directed the West Coast Premiere of Lopez’s “The Whipping Man” at the Old Globe in 2010, heads the well-rounded production. The play is punctuated by dazzling dream sequences individually born from each character’s psyche. One by one, the Candelarias get their own spotlights (designed by Lap Chi Chu) and, with the help of choreographer Greg Graham, pantomime or dance out their innermost yearnings to the sound of delicious music (sound design by Jeremy J. Lee). These different numbers end up being absolutely delightful and fit in the play wonderfully, pacing the suspenseful plot. The set by Campbell Baird does a great job at dating and locating the play, as well as introducing the family’ socio-economic status and values, even before any actor sets foot on stage. Costumes, by Charlotte Devaux, are equally appropriate.

So, prepare to be charmed by this jewel of a play. It has it all: a feel-good sensation with guts and meaning. What more can we ask for?