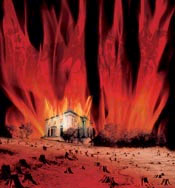 Based on the play by Anton Chekhov.

The main points of interest in the Abbey&#146;s new production of The Cherry Orchard are all off stage. Chekhov&#146;s final and probably most famous play was first produced in 1904, the year of his death and exactly one hundred years ago this year. It was an astonishingly prescient snapshot of the changes working their way through late Tsarist Russia and the ferment of revolution simmering under its surface. An aristocratic brother and sister return to their family home in the country, the last remnant of a collapsing estate falling to debts and unwise, largely outmoded altruism. While a childhood friend and rising bourgeois businessman advises them to break up their lands into plots and generate profits from smallholdings, the family attempt to hold onto shreds of fellowship, memory and fading dignity by ignoring the inevitable.

In itself Chekhov&#146;s play represents his final foray into the unique socio-psychological space he crafted throughout his later work. Its impressive range of personal and political dramatic threads are delicately drawn through a large cast of characters who seem at once frozen to the spot and in the midst of turbulent transformation. Underlying all of the on stage action is a sense of the relentless march of time, the swell of a wave of permanent change which would find the first crest of political expression a year later in the rebellion of 1905. Chekhov presents a series of shifts in tone and focus which challenge the audience to get a grip on how plot, character, and theme work relative to one another. It was and is exciting theatre.

The year 1904 also marked the opening of the Abbey theatre in Dublin, beginning a legacy of national theatre currently being celebrated with a series of prestige productions. Chekhov is no stranger to the Irish stage, and indeed this very apt tale of landowners, peasants, and social change has been adapted to an Irish setting as well as being staged using its original setting. The current production, which retains the historical and geographical base, is touted as a new "version" rather than a new translation, a point playwright Tom Murphy (A Whistle in the Dark, Bailegangaire) makes in the program: "A version, as I see it, is more subjective and more interpretatively open; it is speculative in its consideration of the ‘spirit’ of the original and seeks to translate that ‘spirit’ into a language and movement that have their own dynamic."

The production is an exciting prospect on paper, and especially interesting in the light of the auspicious correspondence of dates which brings it to the stage in 2004. In fact, the appearance of this production following the run of Brian Friel&#146;s Aristocrats gives the Abbey schedule a definite shape which I&#146;m sure is entirely intentional. Spaced only by a short run of Thomas Winterberg&#146;s Festen, these two plays represent a geographical shift from Ireland to Europe while retaining thematic, social, and political resonance across the two productions. Seeing The Cherry Orchard after Aristocrats definitely raises some interesting questions about the connections between Irish and European theatre.

Unfortunately the results on stage are less rewarding than the thought processes behind it. Though Murphy&#146;s text is good, achieving a linguistic sensibility which crosses Chekhov with Ireland without losing the sense of either, Patrick Mason&#146;s direction leaves altogether too much space for speculation. Chekhov may have reveled in subverting the conventions of plot and character in 1904, but there was an internal consistency which held the work together. This production is full of uncertainties which have nothing to do with characterization and social unease.

Posed in a series of uncomfortable tableaux against Joe Vanek&#146;s overly large and excessively abstract set, the actors frequently seem adrift. There is so much room on stage that the nominally charged social and psychological spatial relationships between characters actually lose cohesion. The intimacy of the characterization dissipates, and several poignant and revealing moments in the play read more as endemic banality in a world unintentionally drained of resonance. The same applies to the comedy. Chekhov certainly intended the mixture of comedy and drama to challenge the audience, but this can only work when the comedy is funny and the drama is engaging. Here the comic scenes are just as awkward as the drama, and the result is that neither works at all. It seems as though Mason has attempted to leave the actors and the designer sufficient room to explore the enigmas created by Chekhov, but the result is much too lose to achieve aesthetic coherence. The audience is likely to find itself bored and bewildered, and eventually deeply disappointed given the fascinating prospect the production presented on paper.