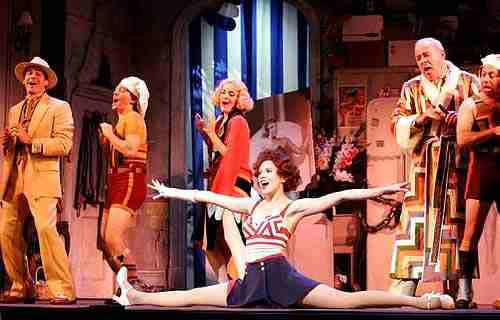 Having one&#146;s love letters revealed to outsiders can be terribly embarrassing. Recall Prince Charles epistle to his beloved Camilla.In the case of The Drowsy Chaperone, however, the love letter is delicious, it is the beloved who causes the observer to wince.Billed as &#147;an unabashed love letter to musical comedy,&#148; the play within a play is a slender, nay, skinny, imitation of the best of the genre lacking the magic that has packed Broadway houses for years.The love letter is well drafted, but, alas, not enough to sustain an evening.

Co-author Bob Martin is the &#147;Man in Chair&#148;/ narrator who plays his treasured record album of this 1920&#146;s musical which never was.His Man in Chair, a lonely, fussy, middle-aged gay man with a passion for musical comedy, is spare and he resists the temptation to be camp.He sits alone in the corner of his tidy, cluttered studio apartment clutching his brandy and the album cover, and sharing with the audience the piece de resistance of his collection. In addition to playing the tunes, his imagination transforms his apartment into the sets of The Drowsy Chaperone, peopled by a full cast and fifteen piece orchestra.Man constantly interrupts, apologizing for sections he knows are weak, trying to impart his enthusiasm to the audience, and having the cast repeat the ones he adores but fears the audience may not be understanding; he is engaging, but a tad embarrassing; the bachelor uncle who is fine in small doses.Heaven forbid he should come to stay and move in.

It is a challenge is to write something intentionally inane without it&#146;s being awful to watch.Well, Chaperone,is not awful but it certainly ain&#146;t good.It is not The Producers, which successfully met that challenge. Alas, there is nothing that an audience member will hum on the way out of Chaperone. Nothing rises to the heights of Springtime for Hitler, though the senile Mrs. Tottendale&#146;s (Georgia Engel) &#147;I Remember Love .. at least I think I do&#148; may strike a chord with some.The Man in a Chair is beautifully drawn, but is not enough to sustain the production.

Musicals from the twenties by Irving Berlin and the Gershwins were written to showcase stars of the time. By and large the weak books of those musicals have faded and only the set pieces have survived. Sutton Foster (Janet), the Broadway star who is about to throw it all away to marry the handsome playboy, has the show-stopping looks and moves to carry the part off, but neither choreography nor material gave her the grist that won her a Tony for her performance as Millie in Thoroughly Modern Millie. Chaperone, Beth Leavel, drowsy in her perpetual alcoholic fog, has the appearance of a star just past her prime, but her Mermanesque efforts at stealing the stage lacked conviction.Aldolpho (Danny Burstein), the self proclaimed champion of Latin lovers is a Saturday Night Live bit repeated a few too many times.

Nor does the passion of this lonely &#147;man in a chair&#148; rise to the heights of obsession &#150; and drama – found in the Maria Callas obsessed men pursuing The Lisbon Traviata (by Terrance McNally), as though the album were the holy grail.The seekers of that grail were foolish, but, by God, they were out there.Man&#146;s quiet despair evokes pity &#150; first for him, then for the lack of an intermission to interrupt the almost two hour production. The Drowsy Chaperone has the good hearted feel of a college review by talented youngsters from whom it would be interesting to see the mature product. It is a love letter without a story to flesh it out.