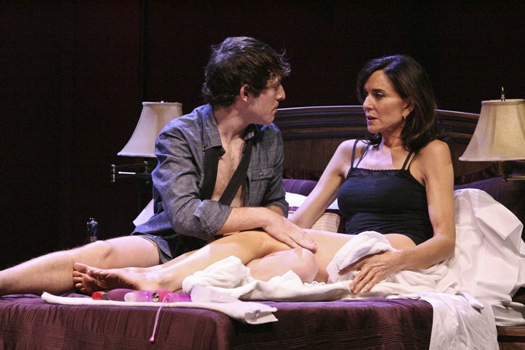 No, not the Iraq War kind. Rather, the sexual shock/awe that seems to be the new normal in America these days.

In “The Escort,” Charlotte is a beautiful, classy, expensive rent-a-hottie, a sort of sexual concierge who services only powerful, wealthy—and often kinky—men. Perhaps that’s not all that shocking in light of former New York Gov. Eliot Spitzer, Hollywood madam Heidi Fleiss and some members of Congress whose names and phone numbers have been found in the files of escort services.

But Charlotte is awesome in the way she confronts our current sexual behavior and attitudes, sometimes speaking directly to the audience, sometimes to the other actors. For example, when Charlotte gifts her concert ticket to a very self-assured physician (also one of her clients) because of an out-of-town business engagement, she grabs him by his necktie and pulls him close. “Let me tell you something,” she says, “I don’t wear panties when I go to a concert. And Mahler makes me—wet.” She pivots and walks away, leaving Howard—the doctor/client—flash-frozen and speechless.

“The Escort” is, by turns, hilarious, witty, insightful, poignant and clunky.

Charlotte, played very well by Maggie Siff, appears before the curtain at the start of the play. Wearing a large white bathrobe, she alerts the audience to: 1. her character’s chosen profession and why she’s comfortable doing what she does; and 2. her precluding any expectations of the cast doing the Full Monty (Full Monica?). True nudity, she says, would only direct attention from the dialogue and dynamics of the play to genitalia and so she and the other actors will wear flesh-colored body stockings when the script calls for simulated sex.

Whereupon she drops the bathrobe to reveal her protective, but still provocative, costume. The character Matthew, her counterpart escort for women, appears behind her, doffing his robe to disclose his body stocking; it’s equipped with a long, skinny codpiece unlikely to incite penile envy in anyone – male, female, transgender or what-have-you.

The exam room of gynecologist Dr. Rhona Bloom is the setting for quite a bit of the action in “The Escort,” providing a platform for Charlotte to tell tales of her own sexual experiences and expound on sexuality in general. The two women hit it off from the start, Charlotte being appreciative of the doctor’s non-judgmental attitude and Rhona being intrigued by her new patient’s unusual occupation.

Turns out Rhona also has a hidden agenda or two. She’s not getting it on currently with any guy and probably hasn’t since her divorce from Howard several years earlier. So, she wonders, is it possible to enjoy sex with a man hired for that express purpose? It’s just a theoretical question, you understand, not that she’d ever consider such a thing, blah-blah-blah. Charlotte’s answer: “Are you kidding? Of course! I’ll set you up with a marvelous guy, a co-worker.”

And she does. Charlotte arranges a hook-up between her colleague, Matthew, and Rhona in a hotel and he seems to be everything as advertised: kind, sensitive and committed to indulging her every whim. But their age differential—he’s in his early 20s, she’s 40-ish—and her unease about employing, however his work is sugarcoated, a male prostitute, almost ruins their play-for-pay date before it begins. She calms down after a while, as does Matthew, and discovers that an afternoon delight can, in fact, be delightful.

“The Escort,” which has had a Seinfeldian groove up until this point, then goes off the tracks:

In short, the play ends in a bewildering, tangled mess.

But the performers are excellent. Siff’s Charlotte is an unapologetic professional sex worker, as cleareyed about her line of work as any Harvard Law School-trained lawyer is about hers. Polly Draper’s Rhona is a convincing, caring physician, a concerned mother and a lonely, hungry woman. James Eckhouse plays three different men, all of them well: a kinky john of a corporate biggie who has a regularly-scheduled date with Charlotte; a cocksure physician (Howard; Rhona’s ex); and a fussy waiter. Gabriel Sunday is both the teenage Lewis and the gigolo Matthew; to his credit he makes each role so distinctive and separate you’d swear they’re two different people.

Attention must also be paid to the set designed by Richard Hoover. Behind each of three large panels at the back of the stage lie a gynecologist’s exam room, a hotel room, a doctor’s office and an apartment foyer. As a scene dictates, a panel rises and the set glides smoothly forward; the scene over, the set glides smoothly back. Would that the second half of this otherwise entertaining play glides as smoothly.