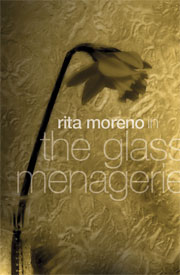 Everybody and their brother are rushing to see Rita Moreno in Berkeley Rep&#146;s new production of The Glass Menagerie. After all, how often do you get a Quadruple Crown performer (Moreno has won an Oscar, a Tony, a Grammy and two Emmys) right in your own backyard? But star power is not the main reason to buy a ticket to Les Waters&#146; beautifully orchestrated interpretation of Tennessee Williams&#146; 1944 masterpiece. Everything from Peter Golub&#146;s entrancing mood music to powerhouse performances by the other three members of the cast recommends this as an engrossing piece of theater. In fact, the only wrong notes are occasionally struck by Moreno herself, who tends to overdo the faded Southern belle, Amanda Wingfield, sometimes to the point of caricature. She does get her share of laughs but one wonders if this is what the playwright intended.

When The Glass Menagerie premiered in Chicago, the fulsome praise of the late Chicago Tribune critic Claudia Cassidy catapulted its author to instant fame. Like Tom in the play (Williams&#146; real name), the playwright grew up in St. Louis and worked in a shoe factory. Like Tom in this play, he wrote poems on the covers of shoeboxes and dreamed both of pursuing a literary career and escaping an imperious mother. Like Tom, he had a beloved sister with serious problems.

Amanda is a deserted wife of a certain age. Making do in a run-down St. Louis apartment with her two grown children, she scrapes by on her son&#146;s meager salary and spends most of her time either reminiscing about the glorious past or nagging her kids half to death. This is a household where a cup of coffee can become a battleground. Moreno, with the aid of costume designer Lydia Tanji, has transformed herself into this pinch-faced faded flower and the first act, in which she does most of her nagging, goes fairly well. It is in Act Two, when she dolls herself up in an over-the-top piece of ante-bellum finery and pours on the Southern charm for her daughter&#146;s long-awaited &#147;gentleman caller,&#148; that she crosses the line.

Yet, the second act is particularly lovely, due to a long scene between Jim, the caller (a very good Terrence Riordan) and Emily Donahoe (Honour) who does an amazing job as the young woman whose shyness is even more crippling than the slight physical impairment which affects her walk. Laura, who seems to fail at everything she tries to do, lives in the shadow of her overbearing mother, caring only for a collection of miniature glass animals, some old gramophone records her father left behind, and her gentle, poetic brother Tom (Erik Lochtefeld). Tom is the narrator/hero of this self-styled &#147;memory play&#148; and Lochtefeld does him proud, giving him a bit of a gay edge, making the character even more autobiographical. He longs to escape the stifling clutches of his mother and the tedium of his warehouse job but his sense of obligation and his love for Laura keep him stuck on a treadmill. When he brings a friend home for dinner &#150; coincidentally the same boy Laura had a crush on in high school &#150; the pot comes to a boil, in more ways than one.

If Amanda is a faded rose, Laura is a bud whose petals are tightly closed. She seems as fragile as the tiny glass figurines that she loves. But as she and Jim, the caller, sit on the floor and talk by candlelight (the electricity has been cut off because the bill wasn&#146;t paid), she unfolds into bloom. Donahoe accomplishes a graceful transition from isolated introvert to a normal young woman and, when Jim whirls her around the floor in a waltz, the audience rejoices in her laughter. But the gaiety ends when one of the glass animals is broken and the illusion ends when the reality of Jim&#146;s situation is revealed. The scene &#150; the longest in the play and notable for the absence of the mother &#150; is a quiet oasis in the turmoil of this troubled household. It cannot last forever. Jim will leave to live his own life and, even more heartbreaking, so will Tom.