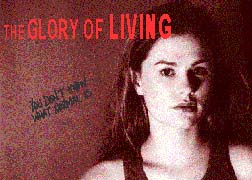 When all the elements come together–a powerful play; sensitive, theatrically savvy direction; strong acting all the way down to the small roles; sets that fulfill perfectly their role of providing a believable world for the play; and costumes and lights that support that world–theatre going can be an absolute joy. All these elements do indeed come together in Rebecca Gilman’s The Glory of Living, directed by Philip Seymour Hoffman and starring Anna Paquin, the Academy Award winning child actor of 1993 (The Piano), and Jeffrey Donovan.

The play tells the chilling, eerily moving story of a lost waif girl-woman and her serial-killer boyfriend, then husband, and their odyssey of rape and murder. They pick up young girls alongside the American strip-mall road, bored young girls, girls who are prime prey for manipulative predators like Lisa and Clint. They sweet-talk them, give them a ride down the road, treat them to a soda and a bag of chips, and a little more sweet talk before the handcuffs, the rape, and the bullet to the brain out in the woods.

Gilman shocks the audience because much of the sweet-talking, much of the manipulating, and all of the actual killing is performed by Lisa. Clint owns her, controls her, and he does this mostly by parceling out what passes for love in their bleak two-person universe much as he parcels out one potato chip at a time from the bag.

Jeffrey Donovan plays Clint, a murderously mercurial character, physically dangerous, with a wheedling, cajoling little-boy charm that turns in a flash to violent sexuality. Watching Donovan as Clint gives a terrifying glimpse into how Charles Manson must have operated. It is Anna Paquin as Lisa who provides the fascinating, beautifully realized character study of Lisa, at one moment the little-girl-lost, then morphing into a stone cold killer in the name of her dark version of love. Her performance is a breathtaking demonstration of the actor’s craft with no blunders, no false steps. Paquin seems to have all the potential to grow into the great roles. Is there a Hedda in her future? A Lady Macbeth? A Medea?

If the play itself has a flaw, it is that Clint, with the exception of one short scene, drops out of sight in Act II. But another character-David Aaron Baker as Lisa’s court-appointed attorney, takes over in trying to think for Lisa, to mold her to his version of reality. Baker is excellent, capturing the second-string, harried attorney in a pitch-perfect performance. In a horrifying-to-watch scene with her attorney, Lisa justifies the murders-these were just throw-away girls; something terrible was bound to happen to them, if not at the hands of Lisa and Clint, then by the assorted abusers in their own families. She considers herself one of them, and accepts her fate.

The ensemble–three of the actors play multiple roles–has been perfectly cast by director Hoffman, and he has helped them prove Stanislavsky’s dictum that there are no small roles, only small actors. None of these performers are small actors.

The MCC Theater has a stage that seems to have little wing space. Set designer Michelle Malavet has adapted perfectly to the limitations of the theater and the multi-set requirements of the play. Her sets, mostly downscale digs and scruffy motel rooms, look desperately lived in, and the scene shifts are brief and smooth. It is a compliment to the lighting by James Vermeulen and the costumes by Mimi O’Donnell to say that neither stands out; they support the play. Original music by David Van Tieghem is haunting and often emotionally jarring, just as it should be.

Actors sometimes speak of a character’s subtext, the unspoken thoughts behind the words and actions. But audiences have subtexts too, and too often it is "When will this thing be over? Why didn’t the playwright cut half an hour?" In The Glory of Living, Gilman, Seymour, Paquin, Donovan, Baker and the others give the audience a rare gift: here the subtext is "I wish this could go on for another hour!"