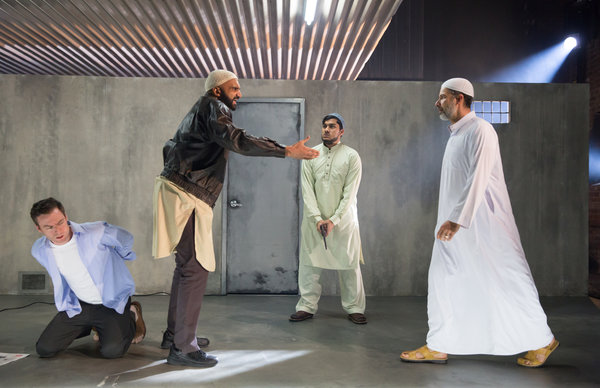 Ayad Akhtar, whose excellent “Disgraced“ won the Pulitzer last year and transferred to Broadway this year, is quickly becoming one of the most important (if not the most important) new voices in contemporary American theater.  His follow-up, “The Invisible Hand,”  currently running at the New York Theatre Workshop, is thematically consistent with the last work but narratively superior, more emotionally sophisticated and intellectually engaging.

The title comes from Adam Smith’s famous (or notorious) metaphor that competing self-interest regulates the marketplace.  “It is not from the benevolence of the butcher, the brewer or the baker, that we expect our dinner,” he writes in “The Wealth of Nations,” “but from their regard to their own self interest.”  Mr. Akhtar begs to differ, arguing that more powerful self-interests may take hold of the hand and thus flush out the influence of the butcher or the brewer.  Nick Bright (Justin Kirk), an employee for CitiBank in Pakistan, has been accidentally kidnapped by followers of the Imam Saleem (Darisuh Kashani), a charismatic religious leader who is relatively non-violent when compared to, say, Lashkar-e-Jhangvi, a militant Islamic group linked to the execution of Daniel Pearl.  The Imam Saleem really wanted Nick’s boss, Carey Martin, who would have been more likely to meet his ransom demand of $10 million.

Nick, however, turns out to really be the brains behind CitiBank’s Pakistani operation, and proves just as useful when he teaches the Imam’s organization how to invest against the market.  He tutors Bashir (Usman Ally), a British-born Islamist who left his native country to fight for something meaningful, and the two eventually develop a friendship despite (or because of) their respective self-interests: while Nick continues to make more and more money for the Imam, Bashir supplies him with Archie Comics and amiable conversation about economic theory and the different appeals of Betty and Veronica.  They even reach the point where Nick can ask, without reprimand, the question that is on the minds of many curious but not especially curious Westerners: “What’s the deal with the virgins in heaven?”

The narrative arc is established early on, when Nick says, “I’ve been around money a long time.  And I’ve seen a lot of things.  But there’s one thing that doesn’t change.  What money does to people.  When you get a taste, you want more.”  The result is an entirely coolheaded take on the intersection of Islam both radical and not with Western capitalism both radical and not.  Mr. Akhtar is a master of tone here: when the play begins, the stage is shallow, walled by concrete, and a sheet of metal—the kind you would find used for roofs in shanty towns—extends not only over the characters’ heads but our own.  Later, when the tensions between Nick and his captors are allayed, everything opens up a little, easing us into a false sense of security.  But “The Invisible Hand,” like Pakistan, is one crisis away from chaos, and friendships can quickly explode when money and power are at play.

Mr. Ally is phenomenal at tracing these various moods, and his Bashir evolves from foul-mouthed machismo to college classroom eagerness and finally to stone-cold impenetrability.  Mr. Kirk is a talent I would like to see more of on the New York stage (it seems his last great role was over a decade ago in Mike Nichols’ film version of “Angels in America“), and he gives Nick a humanity that could easily be eschewed in favor of caricatured, liberal grandstanding.  And while I tend to be suspicious of art that lays claim to topicality, “The Invisible Hand“ arrives at a time where an understanding of American “enemies” is at an all-time low.  It would be too much to say that you will leave the theater with a greater understanding of economics or Islam (that is not the theater’s job), but you will be more open to the similarities between ourselves and those we demonize, whether they are Wall Street bulls or Muslims with guns.

(17880)
$6.99 (as of January 23, 2021 - More infoProduct prices and availability are accurate as of the date/time indicated and are subject to change. Any price and availability information displayed on [relevant Amazon Site(s), as applicable] at the time of purchase will apply to the purchase of this product.)

(20433)
$6.49 (as of January 23, 2021 - More infoProduct prices and availability are accurate as of the date/time indicated and are subject to change. Any price and availability information displayed on [relevant Amazon Site(s), as applicable] at the time of purchase will apply to the purchase of this product.)