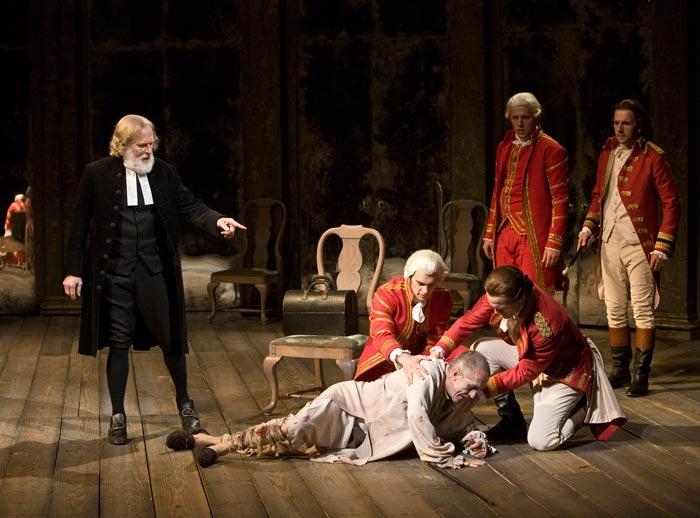 The Madness of George III

Robert Foxworth (left) as Dr. Francis Willis, Miles Anderson (on the floor)
as King George III  with Jordan McArthur, Ben Diskant, Andrew Hutcheson
and Steven Marzolf in “The Madness of George III” at the Old Globe.
Photo by Craig Schwartz

Though this be madness, yet there is method in’t.
Polonius, “Hamlet”

“The Madness of George III,”  now playing at the Old Globe’s Lowell Davies Festival Theatre, takes us amiably (though perhaps not boldly) to the point where insanity, ambition, medicine and sadism converge. In many ways, the story is less about madness than it is about our reactions to madness. That the afflicted person is a head of state adds layers of complexity as powerful men gauge the political winds and vie for greater influence.

The play illuminates the court of King George III, in all its cunning splendor, just a few years after America has won independence. At the start, George, played deftly by Miles Anderson, is a force to be reckoned with: intelligent, inquisitive, blistering in his opinions. He does not suffer fools, particularly his foppish son and heir, the Prince of Wales (Andrew Dahl). He tolerates the stringent Tory Prime Minister, William Pitt (Jay Whittaker), adores his wife Queen Charlotte (Emily Swallow) and banters freely with his courtiers.

But something goes awry. George develops an unknown malady, which causes him great pain and drains him of his faculties. The play implies that the illness is somehow related to the loss of the colonies but, perhaps intentionally, never fully makes that connection.

Enter a series of  physicians who are more intent on proving their own pet theories than improving the king’s health. Sir George Baker (Joseph Marcell), the king’s personal physician, is very keen on measuring the pulse. Sir Lucas Pepys (Adrian Sparks) sets great prize in a good bowel movement. Dr. Richard Warren (Bruce Turk), the Prince of Wales’s personal physician, simply wants the king to die quickly so his boss can gain the throne. Together they provide a ghastly window into 18th century “medicine,” relying on bloodletting, blistering and other treatments (tortures) to bring the cure. Oddly, the king gets worse.

While this amusing spoof of pre-empirical medicine continues, the real action takes place in the political circles surrounding the court. The Prince grasps that this is his moment to ascend to the throne, though his main interest in governance seems to be redecorating Windsor Castle and paying off his own debts. Whig leader Charles James Fox (Michael Stewart Allen) is eager for the Prince to ascend so his party can return to power after decades in the opposition. Pitt bitterly recognizes how the king’s illness adversely affects his own fortunes and deftly delays the Prince as the King’s condition worsens.

At the moment when the King’s demise seems certain, a new doctor arrives. Dr. Francis Willis (Robert Foxworth), who runs an asylum in Lincolnshire, is either a visionary or a sadist, but at least he recognizes that the problem is in the King’s head and not his bowels.

The play is briskly directed by Adrian Noble, and the costumes and set design are nicely executed. The supporting cast does a fine job, but the highlight is Anderson, whose quirky King George is a bit dotty, even when sane, but always retains his essential humanity—even when spiraling into madness.