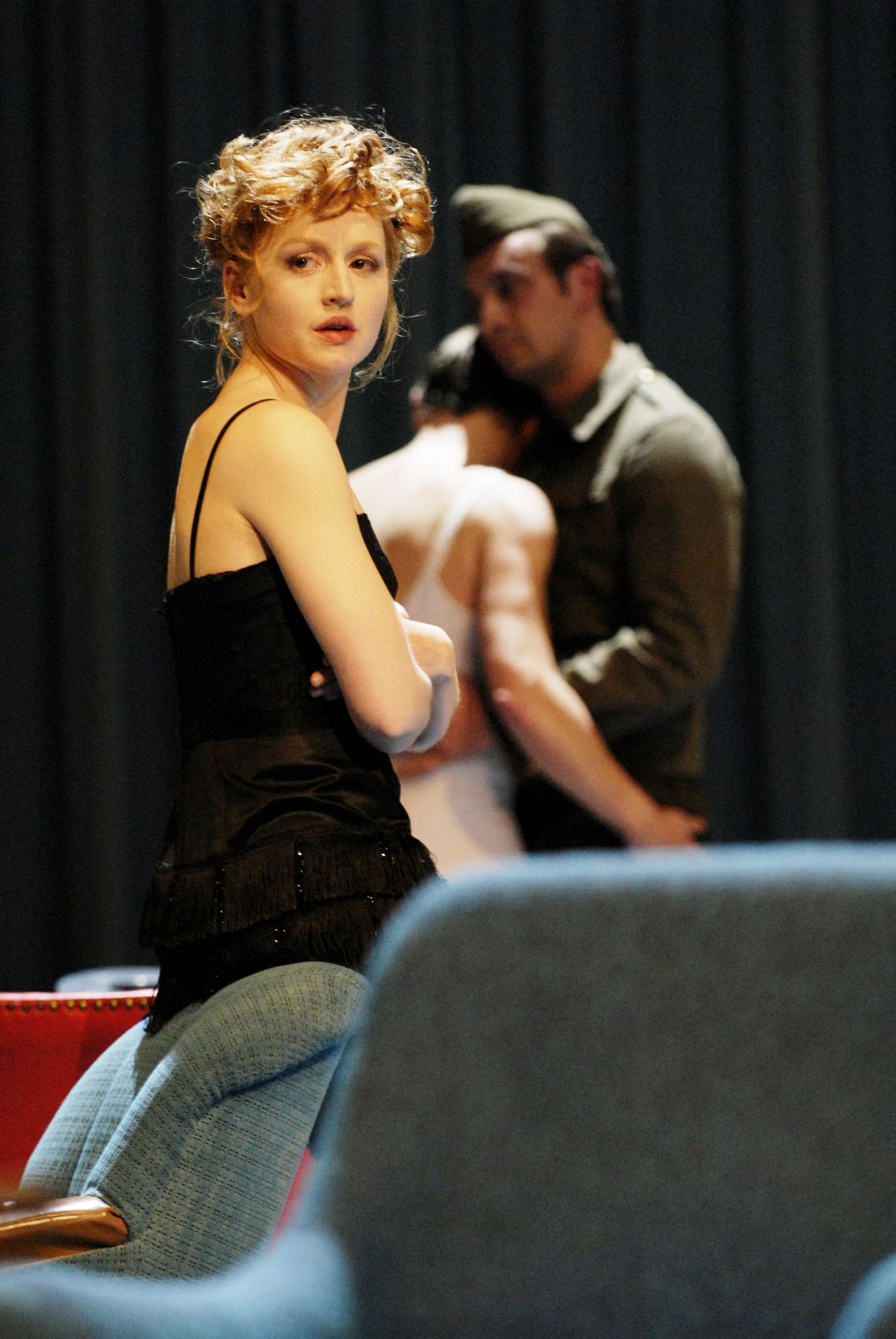 Brigitte Hobmeier plays the title role
in “The Marriage of Maria Braun” at BAM.
Photo by Arno Declair

The Marriage of Maria Braun

Playscript by Peter Märthesheimer and Pea Fröhlich
Based on the film by Rainer Werner Fassbinder
Directed by Thomas Ostermeier
Brooklyn Academy of Music
Nov. 17-20, 2010

When it premiered in 1979, Rainer Werner Fassbinder’s “The Marriage of Maria Braun” became the most successful German-made film in history. This beautifully imagined character study of one woman’s survival through her wits, her sexuality, and her ruthless manipulation of others was widely recognized as an insightful political allegory of postwar Germany, created by an extraordinarily prolific filmmaker at the height of his powers (he died of a drug overdose in 1982 at age 37). Perhaps taking a page from Flemish director Ivo van Hove, who has made numerous stage adaptations of famous films (Pasolini’s “Teorema” and John Cassavetes’s “Opening Night” have been seen in New York) with his Toneelgroep Amsterdam, Thomas Ostermeier has stripped the Fassbinder film down to its essential narrative and staged it with five actors on a set full of mismatched armchairs and tables that looks vaguely like a hotel lobby or airport lounge.

Brigitte Hobmeier, who plays the title character, is a luminescent strawberry-blonde beauty not unlike Hannah Schygulla, Fassbinder’s leading lady. Four men take all the other roles, pulling on bits of drag to play Maria’s mother or sister-in-law and donning masks to play black American soldiers. So we watch one woman make her way through a world of men in a way that sometimes conjures Frank Wedekind’s Lulu, except that this character is anything but a passive victim of men’s desires for her. As she evolves from war bride to bargirl to murderer to instinctive businesswoman to flinty factory boss, she seems driven by an enigmatic, idealistic love for a husband she barely knows and a miraculously resilient instinct to survive and thrive.

Fassbinder created his lushly sensual, exquisitely shot film as part of an elaborate dialogue with the Germany of his generation as well as with the cinema that obsessed him, both Hollywood film noir (specifically the films of Douglas Sirk) and contemporary European cinema (most notably Jean-Luc Godard’s “Contempt”). Ostermeier’s stage production doesn’t attempt to match the film’s scale or reproduce its multidimensional impact. It’s a kind of neo-Brechtian classroom exercise in theatrical minimalism: what’s the bare minimum you need to tell this story? Wig plus slip equals mother. Someone pumps a small tank that produces smoke: instant train station. Although Ostermaier begins with a slideshow of Maria’s childhood and two actors reading “Love Letters to Adolf Hitler” into microphones, these are virtually the only elements not taken from the film. Otherwise, the play sticks to a skeletal version of the screenplay performed by the actors for maximum efficiency rather than visual inventiveness or emotional effect.

The story does get told, more or less. Without the cinematic verisimilitude, the stark narrative seems both more tragic and more mystifying, almost impenetrable. There is an occasional striking tableau—a birthday party for Maria’s mother who dances with her new boyfriend in their underwear while Maria’s benefactor watches from an armchair and Maria and her sister-in-law Betti exchange confidences into standing microphones. But there are also some stagey maneuvers that don’t quite come off—film sequences projected onto characters’ clothing in a way that doesn’t really read to the audience. And the final moment is so murky that I don’t know if anyone who hasn’t seen the movie would even understand what happens. Ultimately, the piece seemed dry, visually drab, and perversely stingy. I think I’m most grateful to the production for encouraging me to go back and look at Fassbinder’s film on DVD, which also includes fascinating commentary by fellow director Wim Wenders and cinematographer Michael Ballhaus as well as a 2003 interview with Hannah Schygulla.