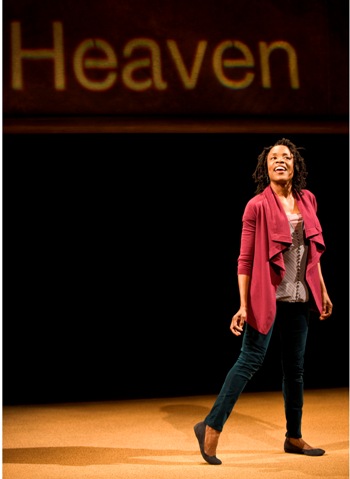 Charlayne Woodard in “The Night Watcher”
Photo by Craig Schwartz

Every child should have at least one grownup he or she can turn to, in addition to mom and dad. And every parent whose child has a trusted adult confidant should consider himself fortunate. In these times, though it might take a village to raise a child, it is the rare family that finds itself with the village close at hand.

Charlayne Woodard, playwright and performer of the solo-play, “The Night Watcher,” is a one-woman village; she is at the Douglas to tell you all about it. “Solo-play” is the descriptor she gives, rather than the usual, “one woman show” or monologue. Call it what she would like you to, if you wish, her fourth “solo-play” is a two-hour, autobiographical monologue; but this one comes with an intermission.

Charlayne and her husband Harris have chosen not to have children. As the eldest of five she had plenty of experience raising kids, thank you. She points out, though it suits the two of them well, this is not a comfortable decision for others to accept. Children are important in her life; she just does not want her own children. She is appointed or anointed to be the godmother or willing auntie to about 30 of the sprouts of friends and family. Her other solo productions have also concerned some of these children, but unlike her previous solo flights, this time she is writing mostly about the times when something has gone wrong, very wrong, in the lives of about 10 of them. She is the trusted grownup they could come to who would keep their secrets. Mostly the secrets we learn about in “Night Watcher” are secrets parents hope never to have to deal with.

Seemingly she is the adult who can draw on some inner source of wisdom to come up with just the right way to handle a range of problems and still be loved … adored would be the better word. As a parent listening to one tale after another you can only gasp at her sagacity. That is, all except when that supposed sagacity sets off alarm bells and a different sort of gasp.

Woodard is Catholic. A 14-year-old godchild comes to her with the horrible secret that she is pregnant and wants an abortion. Woodard takes a deep breath and tells her that fortunately she has choices. What are they? Well, there is adoption — the girl is aghast at the idea of giving away a baby. Or she can choose to keep the baby, but promise to finish school anyway. There is absolutely no discussion of the abortion the girl came asking for. Woodard is a Catholic who loves children but who has CHOSEN not to have any. The godchild became a child raising a child. [Note: the monologue takes place in California where, by law, no parental consent is required and a health-care professional may not impede a minor’s access to abortion.]

Aside from my very deep reservations about her tale of the pregnant godchild, I admit Woodard is a gifted storyteller easily mixing wit with wisdom, wrapping her lithe body around every story. A black woman, she imparts to these children a deep sense of self-worth and the complex meaning of being an African American now. Director Daniel Sullivan told the LA Times, “My job is to help her translate her stories into action. That’s not terribly difficult because her stories are charged with life and energy.” They obviously work very well together.

Within the genre of one-person shows the subject is generally autobiographical. Like most of the others in this category “Night Watcher” is nominally about another subject, children, but is really about Charlayne Woodard. She is a lively person with an eye for the interesting; but like most other monologists her self-focus becomes wearisome. We get snapshots of incidents in the lives of these children, but we do not find out enough about how these lives turn out. The focus becomes how well Charlayne performs in difficult situations.

Generally these solo acts are about an hour long and play without an intermission. Two hours is too much and there is material that could be cut. “Night Watcher” is composed of a string of stories— perhaps snapshots is a better description — most are interesting in their own right, but it is more like reading a collection of short stories rather than getting into a novel with an arc. The way I see it, with a collection of short stories, read them together quickly and you end up with a hodgepodge. Read a good novel of the same length and you will have food for thought. I came away hungry.